There was a moment on Wednesday when it looked as if a Roberto Luongo deal was finally, blessedly, in the works. Luongo, the Vancouver Canucks' goaltender, was at practice and as it was coming to an end, he was called off the ice. Was it to complete the paperwork for a trade? Had the moment finally arrived that one of the many rumoured suitors for his services – the Toronto Maple Leafs, the Florida Panthers, the Tampa Bay Lightning – had finally pushed the button on a deal?

No, it turned out to be a false alarm. When the smoke had settled Wednesday, the Ottawa Senators had traded goaltender Ben Bishop to Tampa Bay, while the Columbus Blue Jackets had traded goaltender Steve Mason to the Philadelphia Flyers for Michael Leighton, but Luongo was still a Canuck, and still stuck in contract limbo.

Typically candid, Luongo said exactly that at a press gathering following practice. When asked why he thought he remained in Vancouver, Luongo answered: "My contract sucks. That's what the problem is. Unfortunately, it's a big factor in trading me, and it's probably why I'm still here."

When asked if the money he was earning – a 12-year, $64-million contract – is poor compensation for not playing, he answered: "I'd scrap it if I could right now."

Luongo cannot scrap it, by the way, under terms of the collective bargaining agreement, which doesn't permit contracts to be renegotiated, only bought out.

About the millstone that his contract has become, Luongo added: "I've had a whole year to think about it. It's good for some things, and not for others. That's a decision me and management made a few years ago when we signed it – and we're going to have to find a way to get a solution."

It went on like that, question after question, none of them softballs either. Luongo was glaringly and transparently honest, the way he has been throughout a process that began last summer when the Canucks signed Cory Schneider to a contract extension and deemed him expendable. Since then, Vancouver general manager Mike Gillis has used up all his minutes on multiple cellphone plans to try to make a deal, but couldn't.

The stumbling blocks were always the same:

The Canucks wanted value in return for a goaltender who had posted a 31-14-8 record, last year, with a 2.41 goals-against average and a .919 save percentage – and thus far, no team was willing to meet Gillis's asking price.

The second part of the equation, which Luongo alluded to, was the length of his contract, heavily front-loaded so that after this season, three years will have clicked off the 12-year term and he will have received $23.40-million in compensation. The annual cap hit is $5.33-million and the contract extends until the end of the 2021-22 season, with five more years at $6.714-million, one year at $3.382-million, one year at $1.618-million and two years at $1-million. Luongo turns 34 on Thursday – Happy birthday Roberto! – and he's signed until just past his 43rd birthday. With the salary cap falling more than $5-million next year – to $64.3-million – teams shied away from making that sort of long-term commitment to him.

So he remains with Vancouver, a Canuck until the end of the season, someone who will likely spot Schneider occasionally, but unless there's an injury – or Schneider falters in a meaningful way – will be cast as a back-up for the remainder of the year.

"Obviously, in the last couple of weeks, things have been emotionally tough for me as far as where I'm going," said Luongo, "but now I can really make sure I'm focusing on the right thing."

Luongo has handled the whole situation with remarkable aplomb, but acknowledged that in the last 24 hours, it finally started to get to him.

"Honestly, it's weird," he said. "I've been pretty calm about the whole situation until – for some reason – yesterday, late evening. I started getting weird feelings in my stomach. I was getting nervous. It was the first time I had that feeling in my gut. I wasn't sure what was going to happen, but now that it's over, I can just focus on hockey."

There was also this: "I think it's more the unknown that's gotten to me more than anything else. I'm proud to be a Vancouver Canuck. I love it here … but I'm human and sometimes it gets to you."

Luongo said he came off early because, "it was 10 minutes before the deadline, so they wanted to make sure that I was available in case something happened and in case I needed to sign off on something. I thought something was possible."

For as long as the process has dragged on, Luongo said he has never been presented with a firm deal or scenario, for which he would have to sign off on his no-trade clause. 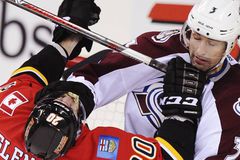 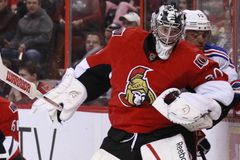 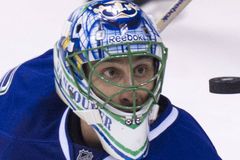