Henrik Sedin made history Friday as he drew into the Vancouver Canucks lineup for his 534th consecutive game.

The 31-year-old native of Ornskoldvik, Sweden tied a club record held by Brendan Morrison, now of the Calgary Flames, the opponent for Sedin's milestone marker. Only one active NHLer – Calgary defenceman Jay Bouwmeester – has played more consecutive games than the Canucks captain.

But Sedin, the NHL's leading scorer and Hart Trophy winner two seasons ago, said the accomplishment does not stand out in comparison to others he has achieved in the past couple of years.

"No, I don't think so," he said after Vancouver's morning skate Friday. "Well, it's always fun to play games, but you've got to be lucky. "There's always freak injuries that happen to guys and I've been very fortunate.

Sedin has not missed a game since before the NHL lockout in 2004-05. The last time he did not play as scheduled was in 2003-04, when he dressed for 76 of Vancouver's 82 regular-season games.

Coach Alain Vigneault and teammates hoped the milestone put to rest questions about the toughness of Sedin and his brother Daniel, an issue for public discussion since the Canucks lost the Stanley Cup final in seven games to Boston last spring.

Chicago winger David Bolland also drew an angry response from the Canucks recently when he mocked the twins by calling them "sisters." Bolland quickly backtracked on the comment.

Vigneault said luck is definitely a factor in Henrik Sedin's longevity. But he has also made his own good fortune.

"It says a lot about his mental toughness and his overall toughness."

Bouwmeester was slotted into the Flames lineup for his 542nd consecutive contest. He has not missed an NHL game since suiting up for 61 for the Florida Panthers in 2003-04.

Morrison set the Vancouver club record between 2000-01 and 2007-08, when he was forced out of the lineup by a wrist injury. He has battled other injuries and inconsistency since then while bouncing around to four different teams. The Canucks chose not to sign him after he attended Vancouver's training camp and played preseason games prior to the 2010-11 season, but he wound up signing with the Flames right away.

Sedin said a strong off-season workout regimen has contributed to his durability. He has also been fortunate to avoid groin and hip injuries that often crop up early in training camp.

"I don't like talking about it, because I don't like jinxing it," said Canucks defenceman Kevin Bieksa about Sedin's streak. "But it's pretty amazing for a guy that has a target on his back for most teams. The other teams' top defence pairs are taking runs at them night in and night out."

Bieksa said he laughs at other people who question Daniel and Henrik Sedin's toughness. He called them two of the toughest players he has ever played with.

"With the punishment they take, you rarely see them in the trainer's room," Bieksa said. "They couldn't be any closer to Canadian."

"It's amazing, nowadays especially with the way the game has evolved, with the physicality and the speed and all that stuff, that [Henrik]could stay healthy for so long – just to show off how much tougher he is than his brother," joked goaltender Roberto Luongo.

Since 2003-04, Daniel Sedin has only missed 21 games, mainly because of a fractured foot that kept him out of 18 in a row two seasons ago. He also missed one with a sore back this season and another one in 2006-07. The consecutive-games-played category is one of the few in which the twins' stats are not almost identical.

Does this mean Daniel is not as tough as Henrik?

"You said it," said Henrik with a grin.

Notes: Defenceman Keith Ballard declared himself ready to go after missing the previous two games with back spasms. But Vigneault said he would be a game-time decision. ... Rearguard Alex Edler also declared himself fit after his back inexplicably "seized up" after Wednesday's win over Detroit. Vigneault also called him a game-time decision, although Edler, Vancouver's top-scoring defenceman said he would play. ... Flames winger Rene Bourque returned to Calgary's lineup after he was suspended two games by the NHL for leaving his feet when delivering a hit on Chicago defenceman Brent Seabrook. "I just moved on from it. Obvioulsy, it wasn't the cleanest hit, and I still feel bad about it, but what can I do now?" he asked. ... Rookie Leland Irving received only his second-ever NHL starting assigment in goal as Calgary coach Brent Sutter avoided playing No. 1 Miikka Kiprusoff in back-to-back games following a home win Thursday over Detroit. 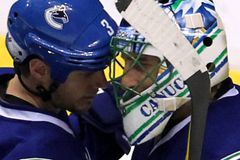 Canucks eke one out against Wings
December 22, 2011 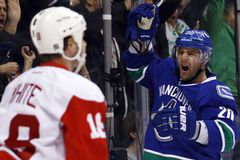