They may, or may not, have been "Canada's team," but three games into the Stanley Cup final, the Vancouver Canucks have become the most hated team in the NHL.

The odd part is that Vancouver's two best players - the Sedin twins - are the most mild mannered, polite gentlemen you'd ever want to meet, but the rest of the roster is pushing their pleasant personalities to the background. From Alex Burrows's bite to Aaron Rome's hit, the Canucks have won few fans outside of British Columbia with their comportment on hockey's biggest stage.

It began in the first round when Raffi Torres obliterated Chicago's Brent Seabrook, a hit that fired up the Blackhawks, and continued through to Monday's 8-1 loss to the Boston Bruins in Game 3 of the Cup final.

You can bet that there were many hockey fans who felt the butt-kicking was just deserts, especially after Rome sent Bruins forward Nathan Horton to the hospital with a "severe concussion," according to the Bruins. The Canucks defenceman hit Horton after the puck was long, long gone, and the latter was carried off the ice on a stretcher.

Rome received a four-game suspension - the stiffest in Cup final history - and did not escape NHL justice as Burrows did for biting Patrice Bergeron's finger in Game 1.

"It does get pretty painful watching and seeing that team in it. ... It sucks seeing them there," Blackhawks forward Dave Bolland told the Chicago Tribune this week. "Typical, pulling hair and biting people. Sort of like a girl ... stuff like that isn't meant for hockey."

In Game 3, centre Maxim Lapierre drew fire. Prior to the game, Bruins head coach Claude Julien said his antics were probably why he played for three teams this season, while during the contest, Dallas Stars forward Krys Barch took to Twitter with his thoughts.

"I don't know if he has an ounce of man in him," Barch wrote. "I'd be embarrassed to be his father."

On the Jim Rome radio show, former Ottawa Senators president Roy Mlakar said the only Canadians rooting for Vancouver reside in B.C., while Edmonton Oilers defenceman Ryan Whitney went on a Boston radio station last week and said: "This team is so easy to hate it is unbelievable ... I'd say that 90 per cent of the guys in the league want nothing to do with seeing them win."

The list of grievances goes beyond Burrows's bite and Rome's devastating hit. Burrows, the Sedins, Lapierre and Ryan Kesler are viewed as players who are not beyond embellishment if it will draw an official's whistle.

Kesler's nasty disposition on the ice and willingness to talk trash don't exactly win friends among NHL peers, while his stone-cold demeanour in interviews doesn't help his Q-score outside of B.C. There was also his willingness - or his outright enjoyment - at playing the ugly American last year during the 2010 Olympics, when he said he "hated" the Canadian team.

"We don't really care," captain Henrik Sedin said when asked about being the villains. "I know the guys we have in the room and they are honest guys, hard-working guys, and we're a tight group. If people on the outside want to say what they want to say, then that's fine." 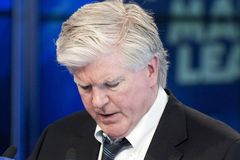