Manny Malhotra, who took a puck to his left eye two years ago and needed surgery to save his vision, will miss the rest of this hockey season, the Vancouver Canucks announced late Thursday morning.

The move came on a day when it appeared the long-injured Ryan Kesler is poised to return to the ice for a game Friday night against the Dallas Stars, practising at full-strength on Thursday morning with his teammates for the first time this year.

Kesler after practice wouldn't say for sure he would play but then coach Alain Vigneault said he had been medically cleared to play. It was later reported that barring an unexpected change, Kesler will play on Friday as Vancouver hosts the Dallas Stars.

Cory Schneider was also announced as the starter against Dallas, giving Schneider seven starts this year for Roberto Luongo's six.

"The long-term health of Manny Malhotra is of utmost importance to our organization," said Mike Gills, Canucks president and general manager, in a press release that revealed Malhotra was being put on injured reserve. Malhotra had missed several days of practice and one game for "personal" reasons.

The centre, known for his excellent faceoff work, especially in the defensive zone, had no points in nine games this year. He appeared to struggle early on but of players with at least 50 faceoffs taken, Malhotra ranks second in the league in draws won, taking nearly two-thirds of them, 65.3 per cent.

Gillis was scheduled to provide more detail in the early afternoon. The move to IR gives the Canucks some relief on the salary cap, and Gillis in the press release spoke of the 32-year-old in the past tense, in hockey terms, but added: "Manny will continue to be a valued member of our organization."

The Canucks are right up against the salary cap, according to capgeek.com, with less than $1-million of space, the third-least in the 30-team NHL. Malhotra is an unrestricted free agent after the season, and is in the final year of a three-season deal that pays $2.5-million per year.

On the ice, as the team loses Malhotra, the Canucks are set to welcome back Kesler, their star second-line centre who has missed a quarter of the season after surgeries on his left shoulder and wrist last summer.

Kesler on Thursday skated with his teammates at practice in a regular blue jersey – signifying he's set to take full contact – and skated on the second line, centring wingers Zack Kassian and Chris Higgins. The first line remains the Sedin twins and Alex Burrows. A newly composed third line is centred by rookie Jordan Schroeder with wingers Jannik Hansen and Mason Raymond. Aaron Volpatti, Max Lapierre and Dale Weise are the fourth line.

The main two defensive pairings were also shuffled at practice Thursday. Jason Garrison has been split from Alex Edler and now Garrison will play with Kevin Bieksa. Edler was paired with Dan Hamhuis. Chris Tanev and Keith Ballard remain the third pair.

Vigneault has a challenge because he has a lack of right-side defenceman. The former Edler-Garrison pairing put Edler, a natural left-side man, on the right, where he sometimes struggled. Vigneault said the previous pairings were a balance of what he had, talent, speed, defensiveness and offence.

The Canucks are 8-2-2 at the one-quarter mark of the season, leading the Northwest Division by five points, and in third spot in the Western Conference. The Canucks are on their best start ever under Vigneault, and have won an NHL-best six in a row.

The team welcomes Dallas to Vancouver on Friday, the Stars at eighth in the West at 7-6-1. 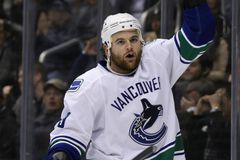