Vancouver Canucks head coach Alain Vigneault summed it up in one sentence: "It's very safe to say that we're playing under our level right now."

To say the least.

The Canucks lost for a second straight night, and fell to 4-5-1 on the young NHL season, with a 3-0 loss to the surging St. Louis Blues at Rogers Arena Wednesday. Brian Elliott, the former Ottawa Senator run out of the nation's capital, made 32 saves for his first shutout of the season and improved to 4-0.

Alex Steen continued his Canuck-killing ways with two goals, making it nine tallies in 15 career games against Vancouver for the Blues forward, and Patrik Berglund also scored for the visitors, who became the eighth opponent in 10 games to score the first goal against Vancouver.

"It's a lot of reacting instead of taking the game to them," Canucks captain Henrik Sedin said. "It's tough to come back ... The way we're not scoring goals right now, it wears on you. We've got to focus on that."

The Canucks offered a push back in the third period, when they outshot St. Louis 17-6. Alexander Edler and David Booth missed open nets, while Alex Burrows was robbed on a scrambling save by Elliott.

The Canucks also had two third-period power plays wiped out by taking penalties. It was that kind of night.

"Our biggest obstacle right now is, basically, our execution offensively," Vigneault said. "We're not generating the type of chances that I think this team is capable of."

Cory Schneider received the start in place of Roberto Luongo, not that it mattered who played goal given Vancouver's offensive impotence. He made 28 saves and fell to 2-2 on the season.

Steen scored his first goal midway through the second period by following his own rebound. He made it 2-0 six minutes into the third with a slapshot that Schneider was late to react to. Berglund finished matters with a goal in the final three minutes, set up by a wonderful pass from Kevin Shattenkirk.

The Blues have won three in a row, and Elliott is playing far better than would-be starter Jaroslav Halak. The former Montreal Canadien, who has been benched for the last three games, is 1-4 with a 3.47 goals against average and a .835 save percentage.

"That's a good team over there, and we didn't give them much at all," said Elliott, who earned the 10th shutout of his career. "We've got to be proud of that."

The Canucks had scored the first goal in just two of their first 10 games, and head coach Alain Vigneault was quick to point that out in his morning briefing. First goals, of course, mean playing from the lead and the Canucks haven't done that much either. On the season, they have held the lead just 15 per cent of the time prior to the game, and most of that was during a 5-1 victory over the Nashville Predators last week. Vancouver fell to 2-5-1 when allowing the opposition to score first, but the stat that must improve is getting the first goal. Twenty per cent of the time won't cut it.

Defenceman Alexander Sulzer made his Canucks debut, replacing Andrew Alberts, after sitting the first nine games of the season. The German was very noticeable in the first period, for good and bad reasons. The good was a deft pass from the blueline to a pinching Keith Ballard to create a scoring chance out of nothing. The bad was getting beat on a spin-a-rama move by Scott Nicol and allowing a scoring chance. Nicol also walked out from behind the net on the tandem of Ballard and Sulzer. Vigneault switched his defence pairings Tuesday in a 3-2 loss to the Edmonton Oilers and kept them intact against St. Louis. Kevin Bieksa is back with Dan Hamhuis, his partner from last year, while Alexander Edler is back on the left side with Sami Salo. Ballard and Sulzer form the third pair. Vigneault made more in-game changes Wednesday, demoting Manny Malhotra to the fourth line and elevating Aaron Volpatti to the third unit. Chris Higgins was dropped down from the second line to the third in place of right wing Jannik Hansen.

Schneider gets another shot to show up Luongo
October 26, 2011 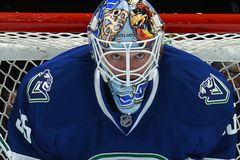 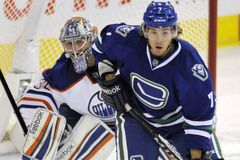 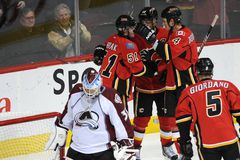