The veterans ribbed the kid.

"'I just have really good linemates,'" shouted one Canuck in the locker room, joking about Hodgson's very humble and modest nature in interviews.

Hodgson, beaming and elated, was asked to reminisce about the winning goal, one he shot from below the goal line that managed to strangely squeak through the pads of San Jose netminder Antti Niemi with 4:17 left in the third period.

"It was actually a pass. I probably should have got it up a little bit off the ice," said a sweaty and smiling Hodgson of the attempt to get it to Mason Raymond.

"Lucky bounce, it worked out okay. It was a great play by Jannik [Hansen]to get in the forecheck, get the puck loose. He's so great at that. He gets in there and causes a lot of havoc."

The Canucks' win lifts the team to within two points of conference-leading Chicago Blackhawks, who visit Vancouver in late January after the all-star break. San Jose is third in the conference, leading the Pacific Division, but has struggled against its Canadian coastal rival. In four meetings this year, the Canucks are 3-1 versus San Jose, which is 1-2-1, coming after a 4-1 series loss to the Canucks in last spring's Stanley Cup semi-finals.

The two goals gives Toronto-reared Hodgson nine points in January - team leader, and ahead of the six points apiece for the Sedin twins (captain Henrik was held off the scoresheet for the third consecutive game Saturday, the first such slump this season). Hodgson is tied for third on the team in goal scoring, with 13, and the runner-up for NHL rookie of the month in December has a good shot at winning the accolade for January.

Hodgson stands No. 4 in rookie scoring, 13 goals and 16 assists for 29 points as of Saturday mid-evening. Edmonton's injured centre Ryan Nugent-Hopkins is first with 13 goals and 22 assists for 35 points. (Edmonton comes to Vancouver Tuesday ahead of the all-star game.)

On the Sharks side Saturday, a star San Jose sophomore, last year's rookie of the year finalist Logan Couture, was a force, tying the game at 1-1 in the first period, on a shorthanded breakaway when he easily beat Luongo. Couture, a 22-year-old from Guelph, Ont., then put San Jose 2-1 in the early second on the power play.

"The Sedins, and the Jumbos [Joe Thorton] and the Marleaus are still very dominant, a tonne of skill, and they're fun to wathc, but those two young guy stole the show tonight," said San Jose coach Todd McLellan after the game.

The Canucks, to win, did what they couldn't do in their last several games at home at Rogers Arena: come out strong. In the past week, they were beat up early by the Anaheim Ducks and then the Los Angeles Kings, losing to the Ducks and losing to the Kings in a shootout. Against the Sharks, even though the Canucks were down 2-1 in the early second, they opened the scoring in the first and outshot the Sharks 12-5 in the first.

For the game, the shot count was close, 30-26 Vancouver, but Canucks coach Alain Vigneault was pleased with his team's sustained push, which often pinned San Jose in their own end. The Sharks blocked 23 shots, compared with the Canucks's 10 blocks, an example of the flurry of pucks Vancouver was launching. In their recent struggles, the team chided themselves for not shooting enough.

"We spent a lot time in their end," said Vigneault.

Beyond Hodgson's work, the American Express line of Ryan Kesler, David Booth and Chris Higgins - often fractured due to injury in recent months - is once again finding its flying form, putting in the team's other two goals. It was a display of team depth - the second and third lines delivered when the first - the Sedins - played relatively well but could not score.

Lastly, Luongo's win increase his total Canucks tally to 212, topping Kirk McLean, who was a Canuck from 1987 through 1998 - helping the team make its second Stanley Cup final.

Luongo reaches the record-wins mark in about 150 less games than McLean, which speaks to the different eras the netminders played in. The Canucks won just four division titles in 33 years from founding in 1970 through 2003 - two of them in the McLean years.

In the past seven seasons, the Canucks have won five division titles, and three straight. Four of those division wins were backstopped by Luongo - and the team is on pace to take the Northwest again.

"It's a great honour," Luongo told reporters after the game. "We've had a great team here since I've been here." 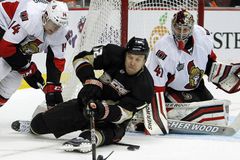 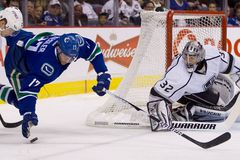 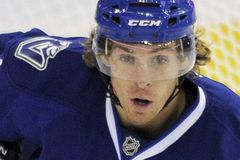