There may never be a more appropriate sports hashtag – #chilloutpeople – particularly as it applies to the emotional bungee jump that Montreal Canadiens fans have been on early in the 2017-18 NHL season.

Perhaps it was foretold in the spring, when the Canadiens, who replaced their coach on Valentine's Day and rose to first place in the Atlantic Division, fell in the first round to the New York Rangers.

They couldn't finish when it mattered. Their leading scorer during the regular season, captain Max Pacioretty, couldn't score in the playoffs, picking up but one assist. Their top playoff performer, Alexander Radulov (seven points in six games) chose free agency over the summer and signed with the Dallas Stars. Their most dependable defenceman and power-play anchor Andrei Markov, couldn't reach a deal and returned to Russia to play in the KHL.

When the new season began in October, Les Glorieux had the worst 10-game start in their storied history as an original member of the 100-year-old NHL, its Stanley Cup champion a record 24 times.

Carey Price, the team's goaltender and generally conceded franchise player, began badly and then fell to a never-explained "lower-body injury." For three weeks he was lost to the team, not even skating for the first two, and panic was in the streets.

Montreal is surely the one city in the 31-team league where it is impossible to sell a "rebuild" plan. The Toronto Maple Leafs only managed it after they hit absolute rock bottom.

In newspapers, on television, on radio talk shows – and, most hysterically, on social media – there were calls for heads to roll: general manager Marc Bergevin, head of player personnel Trevor Timmins, even new coach Claude Julien, who was said by some to "hate Russians." This, apparently, was based on the team's decision to trade its top defensive prospect, Mikhail Sergachev, to the Tampa Bay Lightning for forward Jonathan Drouin. Drouin is slick, a francophone and has a promising upside, but Sergachev was described as a "stud" on defence and defence has been a problem for the Canadiens.

Most of all, however, some fans continue to bemoan the June 29, 2016, trade in which flamboyant, crowd-pleasing defenceman P.K. Subban was sent to the Nashville Predators for stalwart, hard-shooting defender Shea Weber. No one could decide whether it was a good or bad trade, but everyone had a strong opinion on it, a great many blaming the Canadiens.

La Presse was even consulting legal experts on the definition of "sellout," questioning whether the Habs, as they are known by diehard fans, really and truly have sold out every home game since Jan. 8, 2004.

High emotions are hardly new to Montreal hockey fans. On Saint Patrick's Day in 1955, after NHL president Clarence Campbell had suspended Maurice (Rocket) Richard for the remainder of the season and the playoffs for attacking an on-ice official with his hockey stick, the fans pelted garbage at Campbell as he took his seat in the stands and began a riot that spilled out into the streets and led to burned and overturned cars, looting of stores, breaking of windows, dozens of injuries to police and bystanders and 100 arrests.

Only last year, when fans were first hotly debating the Subban-Weber trade, one fan took out a $20,000 full-page newspaper ad to launch his personal protest.

Then came this season's October and November swoon and Price's mysterious absence from practices and games.

Widely considered one of the best, if not the best, goaltender in the world, the Olympic gold-medal winner for Canada was suddenly no longer the darling of the city. "What have the Canadiens won 10 years into the Carey Price era?" one columnist asked. "Nothing." People began complaining about Price's new eight-year, $84-million contract (U.S.) – a year before it even kicks in.

"The way he was playing," says Marc de Foy, a long-time sports columnist with Le Journal de Montreal, "he was so bad that people were saying it has to be personal. But no one knows."

Some thought they did, however. A rumour spread fast that Price and his wife, Carey, were divorcing. The American-born wife had soured on Montreal and wanted out. There was trouble in the marriage. She wanted her husband to be traded or she was leaving without him.

The rumour was repeated by a broadcaster who immediately said he didn't believe it, but, by then, the gossip was rampant and so widely accepted as gospel that Angela Price took the unusual step of posting a message on Instagram:

"Just for the record I am not getting divorced or threatening a divorce nor do I want to leave Montreal. Just in case anyone was interested … though, the rumors have been pretty entertaining. #chilloutpeople."

But then, almost as quickly as things had dropped from the sky, the bungee cord of fan emotion snapped back up. Price returned to the net and promptly shut out the Buffalo Sabres 3-0. Then he defeated the top-ranked Columbus Blue Jackets 3-1 and two days after that beat the Ottawa Senators 2-1. A three-game winning streak in which Price had faced 102 shots and stopped 100 of them.

"The narrative changed dramatically over a few days," says John Lu, who covers the Canadiens for TSN. "When they beat Buffalo, people said, 'Well, it's just Buffalo.' But then they beat Columbus with [Sergei] Bobrovsky in net. Price is back – well and truly back."

De Foy believes that such emotional highs and lows – always part of being a Canadiens fan – has been profoundly accelerated by social media.

"It's always been the case that fans are emotional," he says. "But social media has made it much worse. The comments are so bad. In a civilized society, if you said some of the things we see you'd be sued, but now it seems anything goes. "In social media, there's no filter."

François Gagnon, a popular journalist who appears on the RDS French-language broadcasts of Montreal games, agrees. "People prefer to believe in some dark web site. The truth has no value. They don't want the truth, because it's not sexy enough. Well, this team isn't sexy. It once was, but it isn't now. It's an average team."

And that, says Moshe Lander, is pivotal to comprehending how such emotion can be spilled in Montreal over the slightest turn of events.

Lander is a professor of economics at Concordia University who specializes in the business of sport. He grew up in London, Ont., and is a Buffalo Sabres fan rather than a Montreal Canadiens fan, which he believes gives him a more detached and accurate view of Montreal's reality.

"There is a neurosis that runs through this city," Lander says. "They're on the cusp of 25 years without a Cup."

At 43, Lander is old enough to have strong memories of Montreal's (and Canada's) last Stanley Cup victory, which came in 1993, with a vague memory of the surprising 1986 win.

"But other than that," he says, "they're losers. Yet, they continue to trade on their mystique of 24 Cups and the great dynasties."

Pregame and postgame panels in both languages tend to be loaded with former Habs, he says, several of whom won multiple Cups with the team in previous glory days. "Their talk," he says, "continues to feed that mystique. It creates a vicious hysteria about the team that keeps churning, however the team might be doing."

The pressures on the 30-year-old Price, therefore, are little short of crushing in the post-Subban, "average-team" era of the Montreal Canadiens. Subban, whether he was liked or disliked by his teammates – some say he "sucked all the oxygen out of the room" – was the one the microphones chased. He loved the spotlight and the spotlight loved him.

"Shea Weber doesn't generate the news cycle," Lander says. "He's not a quote machine. So all of it falls on Carey Price. He's the face of the franchise. He's the go-to guy now."

"Go-to" in the net; "go-to" out of the net. Only after what has gone on in recent weeks, the once polite and patient Price has become almost mute, his answers reduced to one word or short sentences, his eyes focused somewhere in the distance.

His speaking of late has been in the net and, obviously, Montreal likes what it is hearing … for now.

"It got really bad," says Renaud Lavoie of TVA Sports. "But that's not surprising for this market. The market is unique because it's a province of eight million and you have but one team. Sure there's the Alouettes [football] and the Impact [soccer], but they just don't compare to what the Montreal Canadiens mean.

And should that mission fail – watch out again. 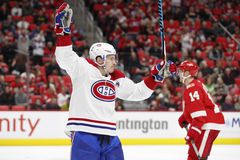 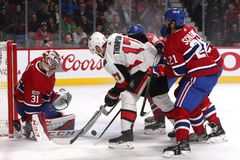 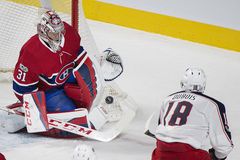