The goaltender Charlie Hodge spent much of his hockey career as an understudy before becoming a castoff.

The diminutive goalie, whose hockey cards described him as the shortest player in the NHL, seemed unable to convince management of the Montreal Canadiens he was worthy of the No. 1 sweater he wore.

Despite doubts about his ability, the goalie managed to have his name engraved on the Stanley Cup six times as a player. He also twice won the Vezina Trophy as the league's top goaltender.

The reward for his under-appreciated success was to be selected by the expansion Oakland Seals, a woeful club for whom he would see more rubber than a worker at a tire factory. Three seasons later, he was picked by another expansion team, the Vancouver Canucks, once again enduring the unenviable role of being the last defence on a roster staffed by rejects and discards.

Mr. Hodge, a long-time resident of the Vancouver suburb of Langley, died of heart failure on April 16 at Abbotsford Regional Hospital in suburban Vancouver. He was 82. He leaves his wife, Sheila; three sons; six grandchildren; and three great-grandchildren.

Mr. Hodge had a long second career as a West Coast scout, known as a curmudgeonly figure at hockey rinks in British Columbia. In 2015, a plaque was placed on Seat 8, Row 1, Section 4 of the Pacific Coliseum, the arena that had once been his workplace and the home arena in recent years of the Vancouver Giants junior team. "Reserved for Charlie Hodge," the plaque reads, "Canucks Alumni and NHL scout."

While there was some playacting in his crusty demeanour, Mr. Hodge nursed ancient resentments. As a young man, he had great success as a paddler and looked forward to competing as a canoe racer at the 1956 Olympic Games in Melbourne, only to be rejected for losing his amateur status as a professional hockey player. The snub bothered him decades later.

"I'm still ticked off," he told Ian MacDonald of the Montreal Gazette in 2004. "What's the relationship between paddling and hockey?"

Charles Edward Hodge was born in Lachine, a Montreal suburb, on July 28, 1933, to the former Jeanie Bridges and John McLean Hodge, a welder from Scotland. He made his debut in junior hockey at the age of 16 in 1950, losing two playoff games as a fill-in goalie for the Junior Canadiens, who went on to win the Memorial Cup championship.

After three seasons, he turned professional with the Cincinnati Mohawks in 1953-54, leading the International Hockey League with the lowest goals-against average.

Mr. Hodge got a 14-game tryout with the Canadiens the following season. On Dec. 9, 1954, he blanked the Toronto Maple Leafs at the Montreal Forum for the first of his 24 regular-season NHL shutouts.

The 5-foot-6, 150-pound netminder had the misfortune of being the second best goaltender in a system in which the great Jacques Plante held top spot. After nine seasons of pro hockey, Mr. Hodge had played only 63 games in Montreal's famous red-white-and-blue sweater.

Meanwhile, in summer, he wore the red-and-white, barber-pole striped singlet of the Lachine Racing Canoe Club. In 1955, he and partner Art (Herky) Jordan won the North American single blade tandem championship in a regatta at Rivière des Prairies, Que. The pair were also part of the gold-medal-winning foursome in the kilometre paddle. Mr. Hodges dream to compete at the Olympics in Australia was thwarted by officials.

The Canadiens traded Mr. Plante to the New York Rangers in a seven-player trade in 1963, getting in exchange the roly-poly goalie Lorne (Gump) Worsley. A flopping goalie who guarded his net like a freshly landed flounder, the Canadiens expected Mr. Worsley to be the club's top goalie until he suffered a pulled hamstring.

Mr. Hodge made the most of his opportunity, winning 33 games with a fine 2.26 goals-against average, thanks in part to recording a league-best eight shutouts. He won the Vezina as top goalie, a trophy he would share two years later with Mr. Worsley.

Even after the formidable shadow of Mr. Plante had been moved, Mr. Hodge suffered the indignity of seeing management tout such prospects as Cesare Maniago and, later, Rogatien Vachon as the team's goalies of the future.

With the NHL doubling in size to 12 teams for the 1967-68 season, the six established teams were only allowed to keep a single goalie on a protected list. The Canadiens opted to keep Mr. Worsley, exposing Mr. Hodge to the draft. He was taken in the first round of the expansion draft, No. 6 overall, by the Seals. He provided a yeoman's effort, but the woeful Seals were the worst team in the league. Mr. Hodge was credited with 13 of the team's 15 wins. He also suffered an NHL worst 29 defeats.

When the NHL added two more teams in 1970, Mr. Hodge was again left unprotected and the Vancouver Canucks snapped him up. (The goalie had played for a Western Hockey League team of the same name two seasons earlier and was something of a crowd favourite.) Mr. Hodge backstopped the Canucks' first NHL victory (a 5-3 win over the Toronto Maple Leafs) and ended what would be his final campaign with a winning record of 15 wins, 13 losses, 5 ties.

He coached a Vancouver junior hockey team and sold real estate for more than a decade. After the Winnipeg Jets entered the NHL, general manager John Ferguson, a former teammate of Mr. Hodge's with the Canadiens in the 1960s, hired him as an amateur scout. He later filled the same role for the Tampa Bay Lightning and the Pittsburgh Penguins. After the Penguins won a second consecutive Stanley Cup in 1992, the team's scouts were included in the engraving. It marked the seventh and final time his name appeared on the Stanley Cup. His six Cup victories as a player is a feat that eluded his more famous goaltending contemporaries – Mr. Worsley, Glenn Hall, Johnny Bower, Terry Sawchuk, all of whom wound up in the Hockey Hall of Fame. 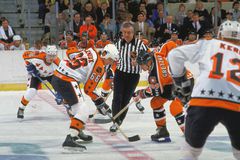 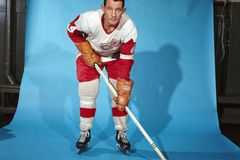