When he was six, Ethan Bear attended a hockey camp put on by Fred Sasakamoose, the first Indigenous player in the NHL.

As part of the festivities, each child was called up onto a stage during a mock draft. When it was his turn, Ethan was presented with a jersey by Mr. Sasakamoose, who joined the Chicago Blackhawks at the end of the 1954 season.

Raised on the Ochapowace Cree Nation in Saskatchewan, Bear is 20 now, and made his NHL debut on Thursday night. The young defenceman was called up on Tuesday from Edmonton's farm team in Bakersfield, Calif., and logged nearly 15 minutes of ice time in the Oilers' 4-2 loss to the Nashville Predators at Rogers Place.

"It was very exciting," Bear said afterward. "I was able to control my nerves and made some plays and moved the puck.

"The Oilers showed they trust my abilities and that is a good feeling for me."

Bear skated with his new teammates for the first time early in the day. He was excited and a bit jittery.

"I messed up a few of the drills and my teammates were teasing me," he said. "They told me, 'Don't be nervous.  You have only worked at this for 20 years to get here.'"

During pre-game warm-ups, his teammates allowed him to skate out onto the ice first and make a quick lap before joining him.

"It was pretty spectacular," he said. "I was smiling the whole time."

There is more to it than just achieving every Canadian kid's dream. Among the NHL's roughly 700 forwards, goalies and defencemen, he is one of only six of Indigenous descent. First Nations communities are treating his achievement as a momentous occasion. The other Indigenous players in the NHL: Carey Price of the Montreal Canadiens, Jordan Nolan of the Buffalo Sabres, T.J. Oshie of the Washington Capitals, Micheal Ferland of the Calgary Flames and Brandon Montour of the Anaheim Ducks.

"Our Nation is gleaming with joy and great pride," Ochapowace Chief Margaret Bear said on Wednesday. "Our young people feel hope right now. They feel their dreams can become a reality because Ethan is living his."

The chief travelled to Edmonton on Thursday and planned to sit with Mr. Bear's parents, brother and two sisters at Rogers Place on Thursday night. A group of 25 students from the Opawikoscikan Community School in Pelican Narrows, Sask., will be in attendance as well.

The fifth- through twelfth-graders travelled nearly 11 hours by bus to Edmonton on Wednesday. Their long-planned trip, a reward for attendance and good behaviour, took on special meaning when they learned Ethan Bear, a fellow First Nations kid, could be playing his first NHL game.

"When our kids found out that Ethan had been recalled, their spirits soared," said Susan Custer, the Opawikoscikan school principal. The First Nations school is 390 kilometres northeast of Prince Albert.

On Wednesday night, students were making posters for Mr. Bear at their hotel. "It feels good to get all of that loving from the community," Mr. Bear said. "Knowing they are behind me makes me want to push even a little harder."

Mr. Bear was drafted by the Oilers in the fifth round in 2015, and in 2016-17 led the Seattle Thunderbirds to the Western Hockey League championship. He was chosen as the league's top defenceman, and had 16 points in 34 American Hockey League games with Bakersfield this season.

He had just finished practice on Tuesday when he was told to pack his bag for Edmonton. "I was kind of in shock," he said.

He spent that afternoon driving from Bakersfield to San Jose, where the Oilers played the Sharks that night. He flew back to Edmonton with the team on Wednesday and skated with his new teammates on Thursday for the first time. Mr. Sasakamoose, the residential-school survivor and trailblazer for Indigenous hockey players, hoped to be at the game. The 84-year-old, who played against Gordie Howe and faced off with Maurice Richard in his brief NHL career, lives on the Ahtahkakoop Cree Nation near Prince Albert, Sask. "This is going to be a very special," Mr. Sasakamoose said.

Mr. Bear's family drove 28 hours one way from the Ochapowace Nation to Tucson, Ariz., last week to watch him play one game for Bakersfield. They then drove nine hours to Bakersfield from Tucson and took in two more games before making the long drive back to Saskatchewan.

They had been home for less than a day when Mr. Bear was called up by the Oilers. That set them off making furious travel plans again.

"I am very proud," Mr. Bear's mother, Geraldine, said. "When I heard, I wanted to yell and scream. All we have ever wanted for him is to be healthy and to achieve his dreams. That is what every parent wants for their kids. It's very overwhelming."

Ethan learned to skate at the age of 3 on the Ochapowace Nation, in a rink named after his dad's father, Fred Bear. When that arena burned down, a multiplex was built named after his maternal grandfather, Denton George, a former Ochapowace chief.

As a child, Ethan was coached by his father, Lloyd, and looked up to his hockey-playing brother, Everett. At 15, he moved away to attend the Pursuit of Excellence Hockey Academy in Kelowna, B.C., and was selected by Seattle in the second round of the WHL bantam draft the next year. He spent four seasons in the WHL, scoring 135 points in his last 136 regular-season games.

"He was just a little whippersnapper of about 5 when he came to my games," said Everett Bear, who played Junior A hockey. "It is hard to explain how happy I am for him. I am getting calls right now from people I haven't heard from in 10 years."

Everett played golf with Ethan one day last week, and was in Las Vegas, bound for Saskatchewan, when he learned Ethan had got the call from the Oilers. Everett has since extended his holidays.

Family and loved ones gathered in Edmonton for his debut. He is likely to play again on Saturday night when the Oilers play host to the New York Rangers.

They jumped out to a 2-0 lead over the Predators on goals by Connor McDavid and Leon Draisaitl but were eventually worn down. Bear was on the ice for three of the Predators goals.

"The one thing I noticed that was different from any other level I've played is the speed with which guys made decisions," he said. "It's something I will have to work on."

He received a warm reception from the Oilers fans, with many people from First Nations cheering him on.

Evan Chamakese and his 11-year-old daughter, Ava, drove to Edmonton for the game from Pelican Lake First Nation in Saskatchewan. A former minor-hockey co-ordinator and member of a singing and drumming group, Evan was already wearing an orange Oilers sweater with "Bear" stencilled across the back.

"As soon as we heard he was recalled and in the lineup, we rushed to get here," Mr. Chamakese said in the arena's grand entrance foyer before the game. "One of the things I like about Ethan is that he is a role model for our kids. He is proud of his culture."

A short while later, with fans circled around them, the drumming and singing group performed a song to celebrate the Oilers and Bear's first NHL game.

Margaret Bear is in Edmonton, too. The Ochapowace chief travelled to Fort Lauderdale, sleeping on the floor in an airport overnight, to see him get chosen at the 2015 NHL draft. "I wouldn't miss it," she says. "He shares his success with our young people. I get shivers when I think about it. It is a wonderful day." 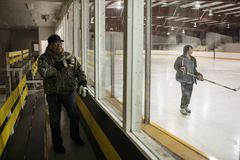