Connor McDavid's much-anticipated rookie season in the NHL was filled with thrilling highs and crushing lows, and both provided a year of teachable moments.

He began last October on a scoring tear for the lacklustre Edmonton Oilers, appearing right on course to fulfill sky-high projections many had set for the top overall draft pick. But his brilliant start came to an abrupt halt on Nov. 3, when the extraordinary teen crashed into the boards and broke his collarbone.

McDavid missed three months, using the time off to watch the game closely and learn. He was even better when he returned in February, winning the season's last three rookie-of-the-month honours. He ended the year with 48 points in 45 games, and despite missing 37 games, he was still fourth in scoring among rookies. His team, however, finished 31-43 – second worst in the league.

Read more: Everything you need to know about all 30 NHL teams

The Globe and Mail caught up with the 19-year-old late in the summer at a BioSteel training camp in Toronto. He spoke about what he had learned in the past year, and what advice he'd give to this season's incoming No.1 draft pick, Auston Matthews, as he prepares to suit up for the Toronto Maple Leafs in the NHL's most insanely scrutinized hockey market. The pair played together on Team North America at the recent World Cup of Hockey, but they will be opponents in Toronto on Nov. 1 when the Oilers visit.

What would I tell Auston Matthews about being the top overall draft pick? Well don't go in the boards too hard – that would be No.1! I'd tell him just to enjoy it. Your first year will go by so fast. I can't even believe it's already over for me. Enjoy, work hard and try to earn the respect of your teammates. That's the first thing you want to get done – earn that respect.

It's different in the big city

Matthews is going to experience more pressure than I did because he's in Toronto. I'd tell him "don't worry about it." You're going to go through slumps. You may not score your first goal in your first NHL game. It may not be the second, third or fourth, whatever. It may not come for a long time. I got great advice from Taylor Hall. He didn't score his first goal until several games into the year, and people were really getting down on him. He told me about it. He told me you can't worry about that. I would say the same thing to Auston. It's not always going to go well for you. The Toronto media can jump on players really quickly, so I would tell him just to remember that.

I grew up in Toronto, and it's amazing what the Leafs mean to people in this city. People tell me all the time they've had season tickets for this many years, or they have been a Leafs fan for that many years. I was here in the city for that [2013] playoff run against Boston. It felt like the whole city shut down. It felt like a cool experience. I would tell Auston that he's got a special opportunity to do something big in a city like Toronto.

In junior, I played away from family, but I was so much farther from them playing in Edmonton last year. I saw them hardly at all during my first NHL season. It's hard; you get a little homesick. You become close to your teammates and you're busy, so that helps. Eventually, you don't have time to think about being homesick.

In junior hockey, you're treated like a big kid. You live with a billet family. You get to the pros, you live on your own and you're responsible for everything that goes on. No curfew anymore. You have to focus. It comes down to what you are willing to put into it. You're treated like a real adult now.

I'm lucky that Taylor took me under his wing right away. He showed me the ropes and what you need to do if you want to be a real NHL pro. It means so much; you definitely need to find someone like that as a rookie. Now he's left Edmonton, and I'm sad to see him go. But we got a defenceman who will help us tremendously, so you have to focus on that side of it. I didn't know anyone in Edmonton's system, no one at all. For Taylor to do that for me – it really meant a lot to me.

Going where you're needed

It means a lot to be put on a team that really needs you. Todd [McLellan] put me in a lot of different roles in Edmonton, and that definitely helped my development. When I look at it now, I'm really grateful for that.

Maple Leafs open season with one of youngest teams in NHL
October 11, 2016
Babcock to err on the side of caution when it comes to rookies
October 7, 2016
Auston Matthews makes a smashing impression at Leafs training camp
September 28, 2016 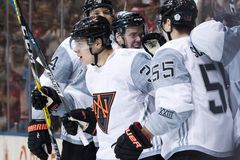