Max Domi and Anthony Duclair are a coach's dream and a coach's nightmare.

The 20-year-old stars are a big reason why the Arizona Coyotes appear ahead of schedule in their rebuilding plan and could even contend for a playoff spot this season. But as young players do, they've given coach Dave Tippett a few grey hairs along the way.

"They're young players that make a lot of mistakes," Tippett said Friday in Buffalo. "And then they have a dynamic element about them, for sure. But you've got to give them the best chance to be successful."

Domi is the Coyotes' leading scorer with 10 goals and 13 assists in 27 games, and Duclair has eight goals and seven assists. The dynamic duo is at the forefront of Arizona's youth movement, with this rookie season providing a chance for some anticipated growing pains.

The Canadian world junior stars haven't been perfect by any means. They're trying to figure out how to navigate the NHL within Tippett's structure while also creating offensively.

"At a young age you've got to realize what you can and can't do at certain times in the game and managing the puck," Domi said. "Obviously it depends on the score of the game, how much time's left, who you're out there against and all that stuff. There's so much that goes into it that you've just got to realize all the situations, and once you can do that it's a lot easier on you (to) try to contribute offensively and make the plays you want to make."

Domi and Duclair were such productive junior players that the challenge is getting them to embrace a two-way game. Tippett is the right coach to instill that.

"He's been more than fair to us young guys," Duclair said. "Obviously we're going to make mistakes. It happens. But at the same time it's, what are you going to do after your mistake? Are you going to pout down or are you going to get back up and work even harder? He lets our skill take over, he wants us to make plays."

Led by Domi and Duclair, this season's version of the Coyotes has more speed and skill than last year. Arizona finished 29th in the league and wound up with the third draft pick and Dylan Strome, who could turn pro as early as 2016-17.

Strome's future mistakes are a problem for next year. Getting Domi and Duclair to take the next step has implications for the present and future.

Domi is producing beyond expectations, even with some mistakes, and he's making significant progress in Tippett's system.

"I'm trying, I'm trying," Domi said. "It comes down to confidence and just having confidence in your ability to play under the structure and not have to think too much. When you're thinking too much, then that's when you make mistakes. If you just kind of make that second nature, you let your instincts take over and that's what you want."

Despite the voting movement for tough guy John Scott, Domi could represent the Coyotes at NHL all-star weekend. He's not thinking about that or just how good he has been in his rookie year.

"I've been lucky enough to play with some good linemates, so that's definitely a big reason for that," Domi said. "As a young kid you just kind of bury your head and work hard every day."

Max Domi undaunted by diabetes: ‘It’s actually been a blessing in disguise’
January 14, 2015 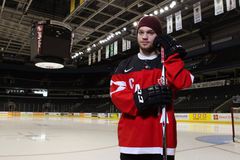 Coyotes trade Yandle to Rangers for package including Duclair
March 1, 2015 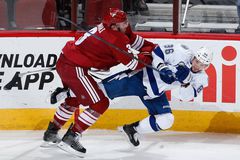 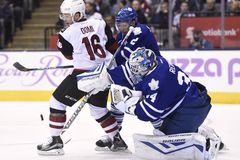