In a tale of two winning streaks, one was broken and another continued Monday night.

But it was the Toronto Maple Leafs who saw theirs come to an end at six games with a 4-1 loss to the last-place Arizona Coyotes. And the Coyotes finished a terrific road trip with three consecutive wins.

Even though the Leafs did not start playing hard until well into the evening, it seemed they would escape a loss when Auston Matthews, who was until then noticeable only because he wasn't earlier, scored at 16:10 of the third period. But Coyotes head coach Rick Tocchet challenged the goal on the basis of goaltender interference by Leafs winger Zach Hyman and won, which erased the tying goal. The Leafs kept the heat on and a minute later Matthews hit the post.

But that was it, as the Coyotes survived a wild ride with Leafs goaltender Frederik Andersen pulled for an extra skater. Max Domi and Tobias Rieder scored empty-net goals in the last two minutes to ensure the win.

The Coyotes also made their power play count, as the unit produced two goals on four opportunities with Brendan Perlini and Oliver Ekman-Larsson scoring. The Leafs were one-for-one on the power play thanks to James van Riemsdyk's goal but it wasn't enough to overcome their inability to get through a team that jams up the neutral zone.

There has been an epidemic of overconfidence greeting the Coyotes on their road trip through Canada over the last week with the Leafs providing the latest sample. Yes, the Coyotes are the worst team in the NHL – they now sport a 5-15-3 record – but most of those wins came in the last three games of the trip when the Montreal Canadiens, Ottawa Senators and then the Leafs figured they could take the night off and still bag a couple of points.

"They were better than us. The first 10 minutes they were better. When you don't start on time and you're not prepared to go right, you don't deserve good results. We got what we deserved."

While it was Matthews' worst game of the season, the Leafs' other flashy players, William Nylander and Mitch Marner, also had bad nights. And as a group, with the exception of goaltender Frederik Anderson, the Leafs did not take the Coyotes seriously.

"It's one thing when the other team, because of their record, makes you respect them," Babcock said. "When the record is like [the Coyotes'] record is, even though we tried to tell the players how good they've been playing lately and they've won two in a row and come from behind and all that, we weren't prepared and so we got what we deserved.

"A lot of the guys that have been driving us, the young skill guys, not today. They weren't here today."

As Babcock noted, the Leafs did not start on time, finally showing up in the second half of the first period, then sliding out of view again late in the second before turning up again as the third period wound down.

Even though the Leafs took a six-game winning streak into the game and were riding the karma of Matthews playing his 100th NHL game against his hometown team, things fizzled quickly.

Perhaps the Leafs' desultory effort was the result of some noses out of joint when Babcock, as advertised, went back to his original line combinations. In Saturday's 6-0 win over the Canadiens, Babcock finally played Matthews and Marner together for a long stretch, in the former's first game back after a four-game injury absence, and they combined for two goals to give the fans a tantalizing glimpse of what was possible when the two most offensively creative players on the team were together.

But against the Coyotes, Marner was back on the fourth line with Dominic Moore and Matt Martin while Matthews was back between Zach Hyman and William Nylander. Matthews, in particular, was mostly invisible which in itself stood out, although he announced his presence with the aborted goal.

Matthews admitted his second game back from his injury was a backward step.

"I didn't play very well tonight," he said. "I don't really like a lot of plays I made, just turned the puck over. I think it's just a means of getting back to the level I was playing at before I was injured.

"It's obviously frustrating but it's what you're working towards, each and every day. Each and every game you want to get back to the point but yeah definitely [Monday night] I wasn't very good myself."

Earlier in the day, Babcock was unapologetic about moving away from the Matthews and Marner combination.

"This is what I think – I like to win every night. That's what I try to do. So I try to put the right people together for that. They're not together tonight."

But by the end of the game Babcock had second thoughts about his flippant response to the question posed about Matthews and Marner at the morning skate. He opened his post-game press conference with an apology to the person who asked it, probably because he put them back together as the third period played out.

"It was embarrassing," Babcock said. "I was a jackass. That's not the right way to treat anybody. It was disrespectful." 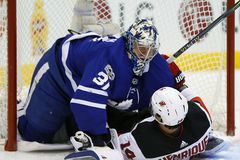 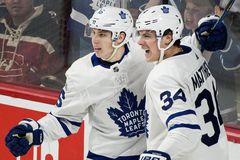 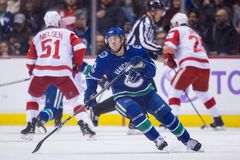