At what point did Canada go off its meds on hockey? The nation's always been infatuated with the sport, but in this generation the intensity level of the relationship has hit stalker level. From the Prime Minister down to the lowliest citizen, it seems the nation and its favourite sport are inseparable. Perhaps only New Zealand's worship of rugby equals Canada's crush on hockey.

What makes this even more perplexing, suggests American hockey writer Jeff Z. Klein, is that hockey barely defines the Canada he sees when he visits the country. How does the instigator rule and cycling the puck encompass the art and culture across the country? It's like judging a shopping mall by the largest store in the place. Still, it's the face we choose to push forward.

In this season of giving, might we suggest that the tipping point in the country's hockey arrived courtesy of TSN's gift of world junior hockey. Before the broadcaster adopted its annual rite of Hockey Holidays, the tournament was a desultory under-20 fixture on the calendar of the International Ice Hockey Federation.

Played by teenagers in backwater European burgs for the benefit of scouts, suits and sweethearts, most saw it as the Spengler Cup's bookend, unloved and, until the famous 1987 brawl in Piestany, Czechoslovakia, unremarkable. But in this red-headed stepchild, the TSN brain trust saw programming opportunities at a time when the cable network didn't have the extensive NHL contract it does now. A two-week opportunity to capture the NCAA's March Madness phenomenon. (Without a betting interest, too!)

Plus, it's a first-see at the stars of the coming NHL draft (for which TSN had the foresight to obtain coverage rights), which was much cheaper than broadcasting a season of the Canadian Hockey League.

So TSN dispatched its announcer team of Gord Miller and Pierre McGuire to "where-dat'" cities such as Skelleftea, Pardubice and Ostrava to ratchet up patriotic passion. It turned the annual Canadian selection camp into a shinny So You Think You Can Dance, a cut-down process as cold as Piers Morgan's smile. It wrapped the process in a Canadian flag that stretches from St. John's to Nanaimo. And it watched the ratings soar to a stunning 6.1 million for the 2010 final in Buffalo, proving that in TV, simply broadcasting a property can make it important in the public's eyes.

All this as the rest of the hockey world yawned in disinterest. Where Calgary and Edmonton will boast guaranteed sellouts of most games this year, few European cities can even be bothered applying to stage the tournament in smaller rinks. More profitable to book an ice show. Or sit dark.

But for Canadians it will be blood and bone the next fortnight. National honour and pride at stake. And you can thank TSN for making it so.

If we might ask one small gift this holiday season, could we ask that those who cover sports on TV in this country find it in their hearts to treat their content as something other than an extended fantasy-hockey resource? Much as it pleases those obsessed with their fantasy team, the secret behind Matt Moulson's assist total or Antti Niemi's save percentage does not constitute journalism. Jay Rosehill drawing back into the Maple Leafs' lineup for a Tuesday night tilt with Buffalo is not a lead. The last time the Senators and Hurricanes met was not the 1972 Summit Series and, as such, not worthy of a minute-thirty.

Likewise, our colleagues breaking trade and signing news shows great industry (and a good BlackBerry), but it's not the sum total of scoops that might be obtained by dint of hard work. Don't even get us started on the hours consumed dissecting the hockey code's proper responses to slew footing, spearing or leaving your feet when you check an opponent.

We're fond of many of the panelists at the networks and value their opinions. Heaven knows they have enough hours to fill. But a panel discussion on the coming contract negotiations between the NHL and the NHL Players' Association is not comparable to a well-researched feature. We know we're needy. Demanding. Impatient. But try to look past all that, Santa, and give us just this one thing and we swear we won't ask for anything else.

Until this time next year. 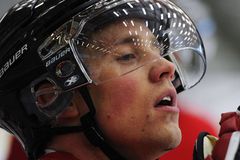