It's a credit to some of the greats in hockey history, the way we talk about Sidney Crosby.

But how can someone be expected to match what Bobby Orr did, winning eight consecutive Norris trophies as the NHL's top defenceman at 27 years old? Or be like Wayne Gretzky, who redefined greatness – with eight consecutive Hart trophies and four Cups by 27 – to the extent he became The Great One?

Then there was Gordie Howe, rest his soul, who won four Stanley Cups for Detroit by 27 and six Hart trophies in a 12-year span, embodying the best of the sport so much that he became Mr. Hockey.

Their accomplishments are so surreal, so legendary, that they'll never be repeated. And that will always minimize this generation's best talents.

"It seems impossible, but it's almost like people don't give Sid enough credit for what he's done in this league," a former teammate, Mike Rupp, remarked the other day. "When you're that consistent for so long, people almost take it for granted."

They do, and they really shouldn't. Sidney Crosby is one of the best ever.

Crosby finally lifted his second Stanley Cup on Sunday night. He needed seven long, hard years to do it again, but this win was convincing, with his Pittsburgh Penguins dominating from start to finish. Crosby was a key part of stifling the San Jose Sharks, too, with his defensive play setting the tone as they limited one of the best offensive teams in hockey to 12 goals in the six games.

That he had only four points in the series wasn't a problem; many of the Sharks stars fared worse, with some of their biggest offensive producers – namely Joe Pavelski, Patrick Marleau and Joe Thornton – going dry.

Crosby also came up big in the deciding game with two assists, including a terrific pass to teammate Kris Letang for the game winner in Game 6, midway through the second period. Appropriately, he was named the winner of the Conn Smythe Trophy as the most valuable player of the playoffs – for the first time – for that effort.

The Cup win caps a strange season for Crosby and the Penguins. Their coach was fired in mid-December, and replacement Mike Sullivan presided over a further decline as they won only five of his first 15 games behind the bench.

They were, at that point in mid-January, 12th in the Eastern Conference – behind Montreal, Ottawa and other ne'er-do-wells who would miss the playoffs by a mile.

But the Penguins are the NHL's best team ever since, making one of the NHL's most remarkable in-season U-turns to win it all.

Crosby is the biggest reason why. The now 28-year-old "kid" from Cole Harbour, N.S., charged back into the scoring race with a torrid 50-goal, 110-point pace over the final 40 games of the regular season. Then, deep in the playoffs with his team on the brink, he added three huge goals – all game winners – in the conference finals, as the Penguins rallied to win in seven games against the Tampa Bay Lightning.

His ability to matter when it mattered most was there. Again.

Crosby's legacy is cemented, 11 seasons in. Even if he never plays another game, he will go down as the best player of the NHL's low scoring, parity-filled, salary-cap era. He is a 5-foot-11 workhorse in a position dominated by giants, and the rare superstar who tirelessly works to dominate both ends of the ice and every detail in the middle.

"Sidney Crosby is as hard, heavy a guy as there is in the league," Sharks coach Peter DeBoer said at one point during the final.

"His complete game for me is what is most impressive," Sullivan said, explained how his captain makes a difference even when he isn't scoring, as was the case in the final.

Crosby was already a sure-fire Hall of Famer before adding this second Cup, but the question of how high he climbs the pantheon of all-time greats remains open. If healthy, he can play at least another decade and creep into the top 10 in scoring in NHL history, joining his mentor and owner Mario Lemieux in 1,700-point territory.

What Crosby will never have is a trophy chest like that of Orr, Gretzky and Howe. The league has transformed from what it was, with more teams and more players and dramatically more competition, for Cups and awards. There are no true dynasties any more, and individual stars have a smaller impact on team success than before.

What's a shame is that Crosby's statistical record has been diminished by more than his era. The concussions, the broken jaw and the 2012 lockout robbed him of nearly 200 regular-season games and who knows how many more in the playoffs.

All told, he has spent nearly a quarter of his career on the sidelines, healing and waiting.

He should cruise to 1,000 NHL points next season as one of the younger players to ever get there, but he could have already closed in on 1,200. Even with all the injuries, none of Crosby's contemporaries are even close in measures such as points per game. No one is likely to approach the likes of Mario and company the way he could.

But Crosby is more than his numbers and trophies. He has become a leader, a shutdown centre, a faceoff ace, an inspiration and a country's folk hero rolled into one impossible-to-match combination. If he remains underappreciated, after this – after everything – it says more about us and our inability to put greatness into a modern context than anything Crosby's done.

He is, quite simply, the engine that drives the Penguins. And the Penguins are the best team in hockey.

"I don't know that I've been around a player that has the same work ethic as Sid does," Sullivan said. "That insatiable appetite to just try to get better and be the best. That's why he's as good as he is. Everybody sees his talent. There's a lot of talented guys out there. But his work ethic allows him to be the player that he is. It sets a standard for our team when your captain and your top player brings a work ethic to the rink every day like he does."

It's been that way from the beginning, back when he was firing pucks into his parents' old dryer in the basement and anointed as The Next One at 14 years old. Crosby has had a tough road from there to here – his body battered and his mettle tested – but somehow he never lost the internal fire that allowed him to overcome it all and push to get better.

So this second, long-awaited Stanley Cup is well-deserved.

Here's betting it's not his last. 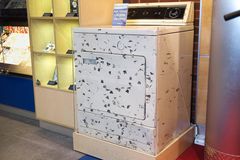 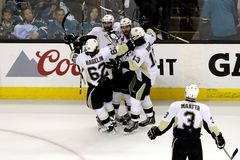 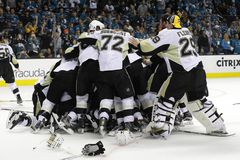