It was Game 2 of the 2009 Eastern Conference semifinals between the Pittsburgh Penguins and Washington Capitals when Sidney Crosby and Alex Ovechkin were going goal-for-goal.

"It felt like every time they got the puck, they were going to do something with it," the Penguins coach said. "It's nice to see when your guy has it, but when you see their guy doing the same thing, it ended up being (like) who's going to score last is going to win this game."

Crosby scored last as each of the NHL's top stars recorded a hat trick, but Ovechkin and the Capitals won the game. The Penguins won the series and went on to capture the Stanley Cup.

That was the height of the Crosby versus Ovechkin rivalry.

Concussion problems derailed Crosby, and Ovechkin needed to switch from left to right wing to regain his scoring touch, but Wednesday night they meet in Washington atop their games simultaneously for the first time in years, engendering plenty of nostalgia about the good old days.

"Those two guys have been the face of the NHL and been promoted that way," Penguins winger Chris Kunitz said. "They're both playing (at an) extremely high level of hockey right now. Ovechkin always being able to shoot the puck and score goals and help his team and lead his team, it's the same for our team with Sid being able to collect the points and do everything that we need him to do."

Consider it a rivalry renewed as the Penguins and Capitals play for first place in the Metropolitan Division and Crosby and Ovechkin revive the debate about who is the league's best player. Ovechkin has 40 goals and 13 assists in his past 42 games dating to last season, when he won the Hart Trophy as NHL MVP, while Crosby has 19 goals and 42 assists over the same span.

"Those two guys are more Gretz versus Mario," Capitals coach Adam Oates told reporters at the team's practice facility Tuesday. "They're the superstars of the league."

Crosby and Ovechkin have some work to do before this battle resembles Wayne Gretzky versus Mario Lemieux, but when they're on the same sheet of ice it's a showcase for the sport. In 25 head-to-head games, Crosby has 14 goals and 29 assists, while Ovechkin has 17 goals and 15 assists.

That's not even counting the seven-game playoff series, when the captains combined for 27 points.

"Regardless of where we are, I think that everybody always watches these games. There's a lot of eyes on them," Crosby said. "We know that it brings out the best in both teams, and, I think, both players. I think just with the history of the teams and all the matchups, I think that we get up for these ones and, as a player, it's just kind of a natural thing when you know the stage is a little bit bigger you get up for it."

In the NHL, there has been no bigger stage for Crosby versus Ovechkin than the 2009 playoffs. Pittsburgh's captain had 103 points that regular season, and his Washington counterpart put up 110 as part of his 56-goal campaign.

"It just felt like there wasn't really any lead that was safe," he said. "It seemed like every rush, even if it wasn't an odd-man rush, it seemed like a good chance that somebody was capable of scoring. I think everyone was on the edge of their seat, players and fans, and it was a fun series to be a part of."

There was history before that series, but Bylsma said those seven games "set the stage" for how current players on the two teams feel about each other. They're division rivals now, one point apart in the Metropolitan, something that only stokes the competitive fire.

"Over the past couple of years they've had a lot of injuries," Capitals right-winger Troy Brouwer told reporters. "I think they've got a full roster right now, so it's a real tough test for us."

The Penguins are expected to have their full complement of stars, even after centre Evgeni Malkin had a maintenance day and did not practice Tuesday. Capitals defenceman Mike Green practised and could return to the lineup after missing two games with a lower-body injury.

But the focus in recent years has been on Crosby's health. He missed five games against the Capitals with concussion problems that began at the 2011 Winter Classic against Washington.

Beset by a broken jaw late last season, Crosby has played in all 14 of the Penguins' games this year, putting up 10 goals and 16 assists.

"It's always good for league and for players, (to have) everybody healthy especially a player like Crosby, Malkin," Ovechkin told reporters. "It's fun to watch them. They make pretty good plays, for fans and for media. And for us, the players on the different team, it's big challenge for (the defence), for players to play against those kind of players."

The health of Ovechkin's game warranted watching over that time, too. Defences figured out his tendencies on left wing, prompting rookie coach Oates to convince his star player to switch sides.

It worked better than anyone on the outside could have imagined, and that roll has continued. Ovechkin went into Tuesday night's games with 17 goals, tied for the NHL lead with Alex Steen of the St. Louis Blues.

"Everybody knows he had a great shot. I think he's probably done a little more this year of shooting, going to the net," Kunitz said. "Everybody has maybe an off year here or there, but he seems to be able to consistently go and score goals at a rapid pace. He's probably on his way to (being) one of the elite goal-scorers ever to play in the National Hockey League."

When they're both lighting it up on a consistent basis, it makes a game between the Penguins and Capitals must-see hockey.

"I would hope that as a fan you do appreciate that," Oates said. "You've got two of the best guys in the world playing against each other it just makes for a little bit more of an electric game."

Bylsma doesn't think any electricity was lacking even when Crosby was hurt or Ovechkin was struggling. Ovechkin was quick to point out that this rivalry also includes Malkin and Nicklas Backstrom, who's quietly tied for the Capitals' scoring lead with five goals and 19 assists.

Crosby and Ovechkin are on the marquee, but Washington forward Brooks Laich refuses to zero in on just those two stars.

"I really, honestly, don't care about the Ovechkin-Crosby rivalry," Laich told reporters. "When we play that game, it's us against Pittsburgh. We don't look at Ovi, like, 'Oh, Ovi, you have to be better than Crosby.' It's not how we've ever faced it."

But it's not just media- and television-driven hoopla. Dating to Feb. 6, 2011, the Capitals are 4-0-1 against the Penguins without Crosby, while Pittsburgh is 4-0-0 when he plays.

When Ovechkin's playing well, too, Crosby said it's good for everyone watching.

That's a major challenge for the rest of the players, but they understand the greater good of Crosby versus Ovechkin.

"They're both faces of the NHL, they're both superstars in this league and they both sell the game extremely well," Brouwer said. "And so any time you can have a face-off with those two big names in one game playing against each other, it's going to sell tickets and it's going to create a lot more buzz." 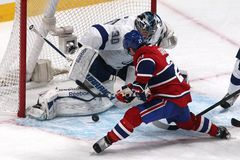