The Canadian Women's Hockey League will pay its players for the first time – and it's in large part thanks to the Chinese.

Each year, since its founding in 2007, the CWHL said it was getting closer to paying its players. Starting this season, they will get a modest wage, with the promise of annual increases.

The pay isn't a lot, certainly nowhere near the NHL stratosphere.

CWHL commissioner Brenda Andress said the league, which admitted two Chinese expansion teams this season, has generated revenue from the marketing, broadcasting and licensing rights from those new clubs. She added that the Chinese teams have also attracted other new corporate sponsors. CWHL games will be broadcast in China as part of the country's widespread efforts to develop hockey players and promote the sport before the country holds the 2022 Beijing Olympics.

Andress says other factors have also contributed to the CWHL's growth in revenue and profile. The league increased sponsorships in Canada, and forged collaborations with NHL teams in Toronto, Boston, Montreal and Calgary and staged some special games in NHL arenas. Sportsnet broadcast key games, including the Clarkson Cup playoffs. Attendance has grown, but the league is still a long way from popular.

Although the player salaries are a humble start, it does mark a new era for the CWHL, which has been home to many of North America's best female players, along with a select few from Europe and Asia, since 2007. The CWHL has covered player travel expenses and equipment for most of its existence, but this will be the first time the CWHL is offering to pay its players.

The CWHL's funding is centralized, so all revenue and expenses are shared equally among clubs.

The CWHL isn't the first female hockey league to pay its players. The National Women's Hockey League, a four-team operation with clubs in New York State, Connecticut and Massachusetts, made its debut in 2015 with a reported salary cap of $270,000 (U.S.) per team. The NWHL paid its players between $10,000 and $25,000 each, but the league had to slash its salaries in half last season because it didn't generate enough revenue to sustain them.

Without pointing to the NWHL, Andress said the CWHL's board of governors proceeded cautiously, making sure not to pay players until they were certain they could sustain it. She said this was the season they had targeted all along.

"We still have a long way to go, and as a women's hockey league we still have a long up-road battle to make sure that sponsors and media pay attention to us so we don't go away," Andress said. "We know this plan is sustainable, it won't just be paying them for one year. We have a plan in place and each year we will grow those stipends."

In June, the CWHL made a huge splash with a news conference at the Hockey Hall of Fame, announcing the addition of a sixth team – an expansion club in China called the Kunlun Red Star, which would play home games in Shenzhen and be comprised of elite players from China, North America and Europe.

Since then, the league quietly added a second team in China called the Vanke Rays. With little explanation or public introduction, the Rays were suddenly one of seven CWHL teams selecting players in the recent CWHL draft. Many players drafted to the Chinese teams are North Americans who have recently finished their NCAA careers and stated their willingness to spend the season in China.

The addition of Chinese teams is a win on many fronts for the CWHL, which had been aiming to pay its players since its inception. The hockey community has for decades sought ways to develop more global powerhouses in the women's game, which has been dominated by Canada and the United States.

This season, however, CWHL teams will be without many of their biggest stars. The best women from Canada and the United States will be in centralized training camps with their national teams preparing for the 2018 Pyeongchang Olympics, including Team Canada standouts Marie-Philip Poulin of the Les Canadiennes de Montreal, Natalie Spooner of the Toronto Furies and Meaghan Mikkelson of the Calgary Inferno.

The league has yet to announce a schedule for this season, which traditionally begins in October.

The motion to pay the players was passed by the CWHL board of governors at the league's annual general meeting on Thursday night. The players' association was to deliver the news to the players afterward. 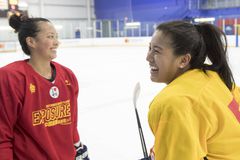 With new women’s Olympic roster, Hockey Canada marks end of an era
May 11, 2017
Follow Rachel Brady on Twitter @RBradyGlobe
Report an error Editorial code of conduct
Due to technical reasons, we have temporarily removed commenting from our articles. We hope to have this fixed soon. Thank you for your patience. If you are looking to give feedback on our new site, please send it along to feedback@globeandmail.com. If you want to write a letter to the editor, please forward to letters@globeandmail.com.
Comments