Dane Fox has transformed himself from unknown commodity in the Ontario Hockey League to blue-chip NHL prospect.

Scoring at almost a goal-a-game pace will tend to do that.

The 20-year-old Erie Otters left-winger has lead the OHL in goal scoring from virtually the opening face-off this season, scoring 25 goals in his first 25 games. He now has 62 goals in 64 games heading into the last weekend of regular season play.

Those are heady statistics for a player who had scored only 54 goals in 176 games in four seasons prior to the current OHL campaign.

Fox also has 39 assists and 101 points — good for second in the league behind teammate Connor Brown — along with 118 penalty minutes.

"I'm paying a lot more attention to all aspects of my game," Fox said. "I'm focusing on playing effectively at both ends of the ice. I'm finishing my checks better than ever and that has led to some scoring chances both for myself and my teammates."

Having already graduated from high school, Fox has also dedicated himself to being the best player he possibly can this season.

"I go to the rink to work out in the morning and then go home to rest for a bit before coming back for practice in the afternoon," he said. "I'm in the best shape of my career and I'm focused on getting the job done."

Otters head coach Kris Knoblauch said the overage forward from Thamesville, Ont., is a major reason for the team's success this season.

"I think Dane may very well have had a breakout season for us last season had he played the entire season," Knoblauch said. "He was our go-to guy at both ends of the ice and he averaged nearly a point a game on a bad team that won only 19 games last season."

"While Dane has been scoring more goals for us this season, he hasn't neglected the defensive side of his game," Knoblauch said. "He's one of the forwards we'll have out there if we are protecting a lead late in the game and before we traded for Brendan Gaunce, he was taking all of our important face-offs.

"Since we acquired Gaunce, he and Fox have shared the role of taking the big face-offs for us."

Fox's 62 goals are the most a player has scored in a single season since the team has been based in Erie. The franchise record is 66, held by Mike Bullard with the 1979-80 Brantford Alexanders and Mike Millar with the 1984-85 Hamilton Steelhawks.

Playing on a star-studded Erie team this season allowed Fox to fly under the radar, until he started goals at a faster rate than everyone else in the OHL this season. Heading into Thursday's games, Fox led the goal-scoring race by 16 over Barrie's Andreas Athanasiou.

"We've got guys like Connor McDavid, Connor Brown, Andre Burakovsky and now Brendan Gaunce and the other teams know who they are and what they're capable of," Fox said. "I don't think as many people knew who I was and they didn't pay as much attention to me and I think I've been able to take advantage of that."

Fox's stellar play this season caught the eyes of many NHL scouts and teams and he signed an entry level contract as a free agent with the Vancouver Canucks in December. He had attended the rookie training camps of both the New York Rangers and St. Louis Blues in recent years but had never spoken with the Canucks until contract negotiations started.

"I was with the Blues at their rookie cap in Traverse City last fall and maybe a few teams noticed me there," Fox said. "I'm just thrilled to have signed with such a great organization as the Canucks and I've been to Vancouver too.

"It's an amazing city and I'm looking forward to starting my NHL career there one day."

The Otters have already claimed a playoff berth and are currently locked in a battle with London for third place overall in the OHL's Western Conference.

"We're focused on the first round of the playoffs," he claimed. "Everything starts from there. With the Memorial Cup being held in London this season, we'd love to be there and win it all.

"But there's a lot of hockey left to play and we have a lot of hard work to do."

Ryan Kesler headed back to Vancouver for MRI on injured knee
March 13, 2014 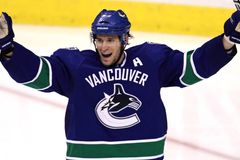 Ebner: Canucks went all in with Tortorella and move hasn’t paid off
March 12, 2014 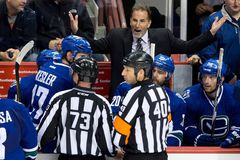 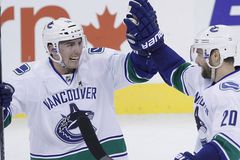 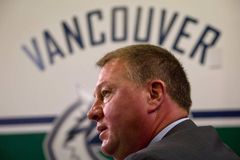 Henrik Sedin in no mood to celebrate milestone game with Canucks in free fall
March 11, 2014 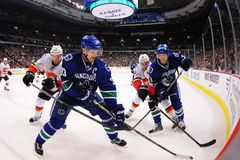 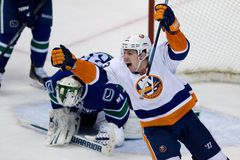