The man who helped troubled hockey player Dany Heatley rebuild his career after a devastating car crash is at the centre of an $11-million lawsuit filed in an Alberta court by the NHL star.

Heatley, a left winger with the Minnesota Wild, alleges that his former agent and business adviser, Stacey McAlpine, as well as McAlpine's parents, Gerald and Eugenia, lured him into several real-estate ventures across Canada and the United States with promises of huge returns that never materialized. The lawsuit, filed last week in the Court of Queen's Bench in Calgary, also alleges that Heatley's former agent dipped into his bank accounts and made unauthorized withdrawals of more than $4-million.

The 20-page statement of claim alleges conspiracy, oppression, breach of fiduciary obligation and unjust enrichment by the McAlpine family, which Heatley accuses of using multiple corporate entities "as a sham, cloak or alter ego, in order to shield themselves from personal liability."

The defendant companies named in court documents are Presidential Suites Inc., Waterfront Development Inc., McAlpine Sports Management Inc. and NSEM Management Inc. They are no longer operating in Calgary. Attempts to reach the principals – the McAlpine family, who now reside in Winnipeg and Kenora, Ont. – were unsuccessful. Stacey McAlpine is no longer on the list of certified agents with the National Hockey League Players' Association.

No statements of defence have been filed. None of the allegations has been proved in court.

J.P. Barry, Heatley's agent since 2004, said "nobody" has been able to reach Stacey McAlpine since this case began percolating. Last year, an Alberta Court of Queen's Bench judge issued a default judgment against NSEM Management of more than $1.3-million (U.S.) on Heatley's behalf, but according to court documents, that money has never been paid.

Now, the amount Heatley is claiming he has lost in his dealings with the McAlpine family and their companies has risen to close to $10-million. He is also seeking another $1.2-million in punitive and aggravated damages for the defendants' alleged "high-handed, egregious and reprehensible" conduct.

"I'm not going to speak for Dany, but he's going to proceed on this," Barry said. "We're just going to move forward with the claim."

"It's a sad tale of mismanagement," Barry added.

Heatley's Calgary-based lawyer, Thomas Ferguson, said he doesn't have instructions from his client to discuss the case with the media.

Heatley was born in Germany, but grew up in Calgary. He played for the Calgary Canucks of the Alberta Junior Hockey League before attending the University of Wisconsin. In the 2000 NHL entry draft, Heatley was the second pick overall and went to the Atlanta Thrashers.

The 31-year-old became a gifted goal scorer, and has averaged roughly a point a game in his NHL career. In 2003, Heatley was behind the wheel of a Ferrari while his teammate, Dan Snyder, was in the passenger seat when Heatley lost control of the speeding vehicle and smashed into a brick wall. Heatley suffered a concussion, wrecked knee and busted jaw and awoke in hospital handcuffed to the bed. Snyder was placed in an induced a coma, and died days later.

Alcohol was not a factor in the crash, but Heatley pleaded guilty to a number of offences, including second-degree vehicular homicide, and was sentenced to three years probation.

Heatley asked to be traded and was sent to the Ottawa Senators. Once there he signed a six-year contract extension, but later asked to be traded. He was shipped to the San Jose Sharks, where he lasted two seasons before being traded to the Wild.

In court documents, Heatley said Stacey McAlpine, who represented him early in his career before becoming his business adviser for $30,000 a year, helped him through his darkest days.

"Stacey provided [Heatley] with considerable emotional support and advice during his recuperation from a tragic automobile accident in Atlanta, Georgia in the fall of 2003," the lawsuit notes, "During this period their friendship flourished, particularly [Heatley's] reliance and trust in Stacey."

The lawsuit alleges Stacey McAlpine introduced Heatley to his father, Gerald, a real-estate promoter and developer, with whom he later developed a "relationship of friendship and trust."

According to the lawsuit, Heatley's real-estate dealings with the family began in 2008 with a $1-million investment in condominium units across Canada, which he would see back in five years along with a 100-per-cent return. Also that year, another of the family's companies made the same investment offer on some U.S. condos.

The lawsuit alleges the defendants "negligently and fraudulently misrepresented" investments as "good" and "safe" when they ought to have known it was "highly speculative."

In a third transaction, a 2009 term deposit that promised a 6-per-cent return in 2010, Heatley sank almost $1.3-million, which was the subject of last year's default judgment.

The lawsuit also outlines Stacey McAlpine's alleged access to Heatley's bank accounts for investment purposes and bill payments, but instead between 2008 and 2009, more than $4-million vanished in four separate transactions.

The lawsuit also makes claims for losses associated with a $2.5-million Ottawa penthouse suite Heatley attempted to purchase while he played for the Senators.

A member of Canada's gold medal-winning hockey team at the 2010 Olympics, Heatley is slated to make $7.5-million (U.S.) for the next two NHL seasons before becoming an unrestricted free agent in July of 2014.

However, the NHL is poised to lockout the players if a new collective bargaining agreement isn't reached by Sept. 15. 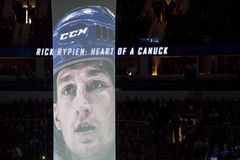 Oilers’ Yakupov hopes labour issues can be sorted out
August 16, 2012 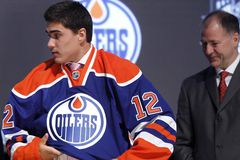