Contrary to popular belief, there is something of an advanced stats guy lurking inside Darryl Sutter, the Los Angeles Kings oh-so old-school coach. You just have to know how to coax it out.

Sutter crunches numbers with the best of them, but he has no patience for the ones that document ancient history. So, for example, when Sutter was told the Kings hadn't played in a Game 7 in over a decade, his response was: who cares?

It didn't matter to him because it wasn't relevant to the moment – or the task at handing, beating the San Jose Sharks in Tuesday's seventh-and-deciding game of the Western Conference semi-finals. After all, Andy Murray isn't coming back to coach the Kings and that's Jonathan Quick, not Felix Potvin, between the pipes.

Nor does Sutter care that until the Kings played the Sharks in the second round of these Stanley Cup playoffs, L.A. had started 16 consecutive series on the road, dating back to 1992. The only series that mattered to Sutter was this one, and the fact that the deciding game will be played at the Staples Center, where conveniently, the Kings have won 13 consecutive home games.

In a series where every game has gone to the home team, in a playoff year where the home teams have a decisive 48-20 edge overall, the fact of playing that game at Staples matters – even if it's just a little.

"There is some value to it," Sutter acknowledged Monday, following an optional practice at the team's training facility. "I know, for the importance of winning a series, it's always better at home … because at one point, you just might get one centre against one centre, or a defenceman-forward match-up that you want. That might be the biggest advantage."

The Kings, the defending Stanley Cup champions, are having a far harder time of it this year, after going 16-4 in last year's playoffs and getting out to a 3-0 lead in every series. This year, they've battled back from a 0-2 deficit to defeat the St. Louis Blues in the opening round and are facing now facing an elimination game for the first time since 2011, when they lost to the Sharks.

Centre Anze Kopitar missed the 2011 playoffs because of a broken ankle, so thus had to watch the series mostly from the press box and the dressing room. This will be the first Game 7 of his NHL career, and he says he will take inspiration from his father, Matjaz, the Slovenian national coach who, he says, once scored the winning goal in a shootout to win a Game 7 in a national title game.

"Everybody wants to be in these types of games," Kopitar said. "You want to raise the level of play and eventually, you want to be the hero.

"What's going to happen [Tuesday], we'll see, but we want to make sure we leave everything out there and give ourselves the best chance to win."

Since joining the Kings as their head coach midway through last season, Sutter's teams have managed to walk a fine line. They are, on the one hand, a physically aggressive team that can wear an opponent down by playing the body at every turn. They are, however, also a team with remarkable discipline that tends to stay out of the penalty box.

Sutter's contention is if his team is assessed three penalties or fewer in any game, they generally win.

Overall, it has been an ultra-tight series, the teams combining for just 21 goals, 12 by the Kings. Each team has managed to score on the power play four times. Los Angeles lost its three games in the series all by 2-1 scores, and twice the decisive goal scored by San Jose came after one of the L.A. players was assessed a delay-of-game penalty for putting the puck over the glass.

Another stat Sutter will acknowledge has value: In a series where the goals have been so hard to come by, the team scoring first won all six games. Both teams want to play aggressively in the decider – whoever has the early push generally has gone on to win the game.

However it turns out, Sutter says he wants his players to enjoy the process – one reason the team stays in a downtown hotel on a game day is to experience the palpable excitement outside the building in the hours leading up to puck drop. The little boy in every player, no matter where he was born, tends to emerge in a Game 7. 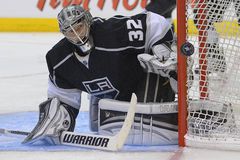 Duhatschek: In the NHL playoffs, if it’s your week, it could be your year
May 24, 2013
Follow Eric Duhatschek on Twitter @eduhatschek
Report an error Editorial code of conduct
Due to technical reasons, we have temporarily removed commenting from our articles. We hope to have this fixed soon. Thank you for your patience. If you are looking to give feedback on our new site, please send it along to feedback@globeandmail.com. If you want to write a letter to the editor, please forward to letters@globeandmail.com.
Comments