It was deemed a bad line change on the broadcast.

What it really was was a brutal botched dump-in by the Chicago Blackhawks.

Early in Monday's overtime in Game 5 in Anaheim, Bryan Bickell accidentally hammered the puck off of the skate of Ducks defenceman Francois Beauchemin right at the offensive blueline.

He didn't realize he had and quickly headed for the bench.

Some of his teammates followed his lead, assuming the puck had gone deep, and what ensued was a mad scramble back into the Hawks zone that was capped off by a Ducks 2-on-1.

And that was the game.

Bickell's gaffe nullified a fantastic night from some of his teammates after their team had a brutal start to the game. Captain Jonathan Toews was unbelievable, scoring two goals to lead the late comeback to force overtime. Duncan Keith again logged nearly 30 minutes and the ice tilted Chicago's way every time he was out there.

For the most part, the Blackhawks stars have still been star-like in these playoffs, but their depth players are hurting them against a team like Anaheim, which is getting contributions from all over. Chicago is thin on D after Michal Rozsival went down with a broken ankle in Round 2, and they've got too many passengers up front, with Bickell and his oversized contract at the top of that heap.

The NHL has become such an unforgiving league for good teams. The salary cap is creeping up each off-season, but there's pressure on clubs like Chicago every year to dump a useful body and find a replacement in order to stay competitive.

That attrition cost both Boston and Los Angeles playoff spots this season.

The Blackhawks have survived the whittling better than most. After winning the Stanley Cup in 2010, it was Dustin Byfuglien, Andrew Ladd and Kris Versteeg who were moved. Then they lost Michael Frolik. Then Dave Bolland was dealt. And Nick Leddy last fall.

For the most part, they've made smart decisions to compensate. They've had players like Andrew Shaw and Brandon Saad and Teuvo Teravainen in the system, who've brought cheap contracts and value, which is a must.

But because he has so much talent to pay elsewhere in the lineup, GM Stan Bowman's few missteps have hurt, tightening that cap crunch.

Bryan Bickell is the biggest example.

One of the real beneficiaries of that stacked Hawks team that won in 2013, Bickell rode an 18.4 shooting percentage to nine goals and 17 points in 23 games.

His most frequent linemates on that run? Toews and Patrick Kane.

Bickell was 27 years old and had played little more than 200 regular season games to that point. He signed a four-year, $16-million deal six days after they won that Cup.

Since then, including the two postseasons, he has 58 points in 173 games – a 27-point pace per 82 games – despite playing most often with Shaw, Kane and Saad.

And, as witnessed on Monday's winning goal, he's not particularly adept defensively.

That's as close as you'll see to an anchor on a team as well-run as the Blackhawks.

Chicago has to pare more talent this off-season. Toews and Kane are getting deserved raises into uncharted territory ($10.5-million a season) and that's going to create a brutal squeeze. They already have $65-million committed (to 15 players) on what's expected to be a $71-million cap, and that's with Johnny Oduya and Saad and Marcus Kruger and Brad Richards and Rozsival all needing new contracts or replacements.

In a summer of tough decisions, Bickell should be an easy one: They need to move him to a team looking for a reclamation project.

After that, the calls get tougher.

The Blackhawks aren't done in these playoffs. They've pulled off several remarkable comebacks and showed in Game 5 that they could well have another. Game 6 is in Chicago, and this series has been so hard fought it deserves to go to seven and back to the pond in California.

But even if they survive against the Ducks, and even if they win another Cup – which would be their third in six years – they'll have to punt more than only Bickell to stay a contender, especially as the West (and Central Division) continues to improve. Vet Patrick Sharp is one player likely to be moved, but there's also another less likely option that could really be a game-changer.

With Scott Darling emerging as the, well, darling of their season as their backup goaltender, there's the opportunity to potentially move starter Corey Crawford, their third highest salary, for relief and help elsewhere.

It's not as crazy as it sounds. More and more teams are having success with cheap options in goal: Both the Ducks and Lightning – who are leading in the East final going into Tuesday's Game 6 – are in the NHL's basement in salary dedicated to the position this season.

And goalies like Darling (and Hawks' third stringer Antti Raanta) are proof that there's considerable talent hiding in the minors and overseas.

Crawford is a solid goaltender. He's won a Cup, and he's coming off one of his best regular seasons. But his career numbers also suggest he's only slightly above average for a No. 1, and the Blackhawks are paying well above average – the sixth highest cap hit – for an already 30-year-old netminder's services until 2020.

Long term, it makes some sense to get out from under that deal and buy more flexibility for the rest of the roster, which contains a handful of players that are harder to replace.

No matter what happens the rest of the postseason, the Blackhawks will have to get creative this summer. They've managed to stay on top while shedding plenty of talent the last five years, but this is Bowman's toughest test.

And they can't afford any more blunders from the few non-stars they can afford to pay.

Mirtle: Blackhawks' lack of depth on defence a potentially fatal issue
May 20, 2015 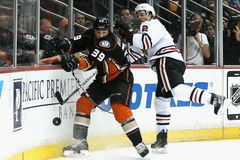 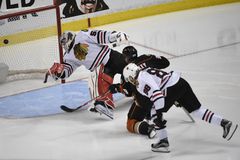 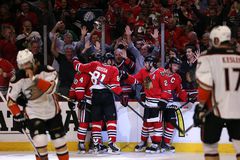 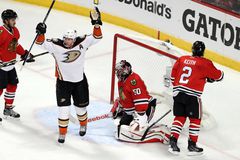