Put the coronation on hold - for three nights anyway. One win away from their first Stanley Cup championship in 45 years, the Los Angeles Kings couldn't close the deal Wednesday night, falling 3-1 to a New Jersey Devils team that had nothing to lose and were finally rewarded for some hard luck and bad bounces endured earlier in the series.

The Stanley Cup was in the house, with curator Phil Pritchard pushing it into the Staples Centre, with the game still scoreless in the third period. The players' families were marshaling in the city, visiting from all across North America. The champagne was on ice, the commemorative T-shirts and hats, manufactured and ready for distribution. On the morning of the game, the players talked about how difficult it was to maintain the necessary focus, and it certainly showed for a while. It was a listless start for both teams, jangly nerves and jitters not previously associated with the Kings in these playoffs on display early.

Considering all that - and the fact that in the midst of a near perfect post-season the Kings had twice previously stumbled in Game 4, after getting an opponent on the ropes - it probably wasn't all that surprising that they had a big fat slip on the banana peel.

L.A.'s next chance to win the Stanley Cup will be Saturday in Newark, N.J., where they will put their perfect 10-0 playoff road winning streak on the line. The Devils narrowed the gap in the best-of-seven series to 3-1, largely through a heady and skilled play from rookie of the year candidate Adam Henrique with the game up for grabs in the third period.

Ilya Kovalchuk finished it off with an empty netter.

"We wanted them to have to jump on a plane to New Jersey," said Devils' goaltender Martin Brodeur. "We had to go anyways."

With the game teetering in the balance, Henrique broke a 1-1 tie with 4:31 to go in the third period with his fourth goal of the playoffs.

Henrique took David Clarkson's pass off his skate and buried it past goaltender Jonathan Quick, stick side, the first time in the series that they'd gotten a clean shot past the Kings' seemingly impenetrable netminder.

"A big-time play," assessed Devils coach Peter DeBoer. "A goal-scorer's play and he's got a knack for that."

It was Henrique's third game-winning goal of the playoffs, the knack DeBoer alluded to. Previously, he'd scored two overtime goals, tying the NHL rookie record set by the Montreal Canadiens' Jacques Lemaire in 1968 and equaled by Montreal's Claude Lemieux in 1986. Both of Henrique's overtime goals were series-clinchers, eliminating the Florida Panthers in double overtime of the seventh game in Round 1 and knocking out the New York Rangers in Game 6 of the Eastern Conference final. Henrique is just the second player in NHL history to tally multiple series-ending overtime goals in one playoff year, joining Calgary's Martin Gelinas in 2004. Kings' coach Darryl Sutter will remember that. He was Gelinas' coach at the time. Sutter's press conference was Tortorella-like in its brevity.

"It's a turnover," said Sutter, of the winning goal. "Misplay between the defencemen (Willie Mitchell and Slava Voynov). Not  a  coverage play. Can't make those long passes and think you can get away with it.

"I'm just a kid having fun," said Henrique. "This is where every kid dreams of playing one day. We know it's going to be a tough task coming back, but we'll take it one game at a time. There's no quit in this group. We know we can do it. We know we can put four together and come back."

No Stanley Cup final since 1998 has ended in a sweep, and the Devils made sure they weren't swept either, coming out with their strongest game of the series and presumably catching the Kings thinking championship thoughts.

"We think we've played really well in the series, and haven't got any results," said Brodeur. "But you don't just change for the sake of changing. In the playoffs, this has been working for us. We just wanted to do more of the same.

"We just wanted to play well, give everything we had, and see where that brings us. We were able to win. We're pretty happy about it. The road ahead is still difficult.

"But it's fun to win. It's been three games that we played well and no result. Regardless of what happens next game, at least we've won one."

The deciding game was not exactly a thing of beauty. It was scoreless well into  the third period before the Devils' Patrik Elias gave the Devils their first lead of the series, scoring on a rebound from the side of the net at the 7:56 mark of the third period following a turnover in the Kings' zone.

New Jersey's lead lasted only a minute and two seconds, however. With David Clarkson in the penalty box for a questionable boarding call against Brown, Drew Doughty's long shot from the left point leaked through Brodeur's pads, with Brown providing the screen in front.

Doughty is the only player with a point in all four games.

The Devils made two line-up changes for the game, forward Petr Sykora and defenceman Henrik Tallinder both going in for the first time in the series.

Sykora, who replaced Jacob Josefson, previously played 15 games in these playoffs, and managed just four points in that span, which is why he came out of the line-up in the first place.

But he is a proven sniper and at a time when goals have been hard to come by for the Devils, it was a chance that DeBoer figured was worth taking.

So, for that matter, was the decision to put Tallinder in for Peter Harrold. Tallinder was placed on injured reserve back on Jan. 30 and missed 37 regular-season games, plus 21 in the playoffs, recovering from acute thrombophlebitis in his lower leg. Tallinder was a top-two defenceman for the Devils before his condition flared up and had been cleared to play before the start of the series, and played a lot for the Devils in his return. 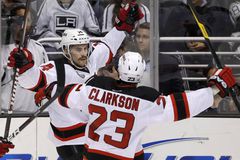 On a team deep with playoff stars, Quick has the edge for MVP
June 5, 2012 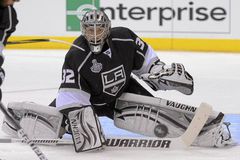 Kings blank Devils to move within one win of Stanley Cup title
June 4, 2012 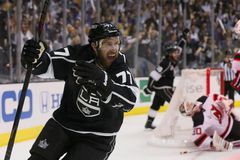