Don Cherry is returning to Hockey Night in Canada next season.

The 82-year-old star of "Coach's Corner" has agreed to a multiyear deal, Scott Moore, president of Sportsnet and NHL properties, told The Canadian Press on Monday.

Cherry's two-year deal with Rogers, which owns Sportsnet, expires at the end of the playoffs.

In 2013, Rogers signed a 12-year, $5.2-billion deal for NHL rights in Canada. They took a ratings hit this spring, however, when no Canadian team made the playoffs.

Moore hinted there could be changes coming in the wake of the low-rated playoff run.

"All I'll say is, you tweak as you go," he said at the Rogers programming launch.

He wouldn't offer any specifics on what the tweaks could involve. George Stroumboulopoulos is currently on a five-year deal while Ron MacLean, the man he replaced in the main host's chair who now fronts Sunday's "Hometown Hockey" broadcast, is in the middle of a four-year contract.

Rogers has revamped hockey coverage in this country since taking the reins from CBC, replacing MacLean with Stroumboulopoulos in 2014. The move has been controversial with Stroumboulopoulos seen by some fans as an outsider. Cherry's role has also been reduced under Rogers' leadership, though he and MacLean continue to host their intermission segment "Coach's Corner."

This spring, audience levels fell below the million mark for many early-round playoff games. According to Moore, the three Stanley Cup final games between the Pittsburgh Penguins and the San Jose Sharks have drawn between 1.7 and 2.2 million viewers. This allows him to declare that "hockey is still king," when it comes to sports viewing in Canada. Still, it took until the final round for hockey playoff numbers to edge past what basketball's Toronto Raptors were drawing in their final two playoff rounds.

"As half of the rights-holding group, we're pretty happy with that," Moore said of the surge past the million mark in Raptors ratings. Sportsnet and TSN split TV coverage of the Raptors' playoff run. Moore said deciding which network started each round was decided by a coin toss.

Prior to the playoffs, Raptors broadcasts were down in viewership year-to-year.

"Nobody could understand that," said Moore.

Thanks in part to the Toronto Blue Jays exciting playoff run last fall, Sportsnet's year-to-year ratings sit third overall in Canada behind only CTV and Global and ahead of CBC.

The halo effect from the Jays' playoff run is helping Rogers through its hockey slump this spring. The Jays, who are owned by Rogers, are up 58 per cent in season-to-date numbers compared to a year ago. There have been 10 Jays games averaging more than a million viewers so far this season, compared to just one at this point last year.

Moore says he kidded Jays president Mark Shapiro about the TV success, telling him the club is hurting his hockey ratings. He feels the controversy over the manager switch in the off-season actually helped keep the Jays fan base energized and added to the carry-over in interest from last fall's playoffs.

Moore also talks with Toronto Maple Leafs president Brendan Shanahan and supports his efforts to tear down and rebuild the team, despite the effect it's had on the Leafs TV ratings.

"The Leafs do drive the eco system of hockey in this country," said Moore. 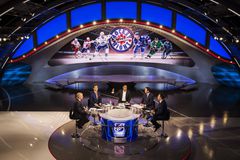 Canadian-free NHL playoffs no killjoy for Rogers Media
May 2, 2016 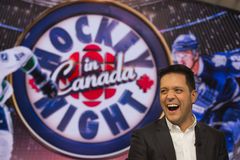 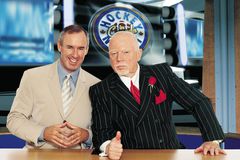