Montreal Canadiens forward Brendan Gallagher grew wide-eyed at the news Hockey Night in Canada was leaving the grip of the CBC for the control of Rogers Communications Inc. and asked the question on the minds of millions of Canadians: "So what's going to happen to Don Cherry?"

Well, judging by the careful talk of Rogers executives at Tuesday's news conference to announce their 12-year, $5.2-billion deal for the rights to exclusively broadcast NHL games in Canada – a deal that includes editorial control over the 61-year-old Hockey Night in Canada institution – the country's favourite cranky uncle and his equally loud jackets are not going anywhere. In fact, if Mr. Cherry, who turns 80 in February, is willing, viewers will see much, much more of him once Rogers takes charge of hockey on national Canadian television starting with the 2014-15 season.

Keith Pelley, president of Rogers Media, did not want to go into much detail about plans for Mr. Cherry and other Hockey Night in Canada broadcasters like his sidekick Ron MacLean. But he did allow, "Don could appear on seven different networks."

Rest assured that Mr. Cherry is held in much higher esteem in the boardrooms at Rogers than he is in the same quarters at the CBC. Those who run the CBC were never happy when Mr. Cherry set off a controversy and only tolerated him because of the massive ratings and associated revenue Hockey Night in Canada brought to the corporation.

But at Rogers he will be among friends. The late Ted Rogers was a huge admirer, and one year Mr. Cherry was snuck into the company building to lead the entire staff in a surprise rendering of Happy Birthday for the company founder. Rogers Sportsnet already plays host to Mr. Cherry's popular radio show, and Scott Moore, Rogers Media's president of broadcast, regularly defended Mr. Cherry to a series of exasperated CBC presidents when he was running CBC Sports.

"Don Cherry is an iconic Canadian," Mr. Pelley said. "We haven't even started the editorial questions with the CBC. But the idea is all the profiles and all of the stories will go across all of the [Rogers] networks."

Not to mention all of the panel shows. Sunday will be Rogers' day to exclusively broadcast national NHL games in Canada. The plan is to have non-stop, NFL-style pre-game shows, panel shows and post-game shows starting in the afternoon on both Saturday and Sunday. There will be lots of room for more of Mr. Cherry if both he and Rogers want the additional exposure.

"I have no idea what's going on. I haven't talked to CBC, I didn't see the press conference, I was en route somewhere," Mr. Cherry said to reporters on Tuesday night. "So I'm asking you guys: Do I have a job?"

"Usually I'm the best guy in the world for a comment, but I can't comment on something when I don't know what's going on," he added.

Mr. MacLean's position is less certain. Like Mr. Cherry and the rest of the Hockey Night in Canada broadcast crew, his contract is up at the end of this hockey season.

Mr. MacLean said Mr. Moore has already been in touch about sitting down for a discussion with both of them.

Mr. Cherry may be the biggest star, but Mr. MacLean has had a great deal of behind-the-scenes control for years.

"My role has always I believe been overstated," he wrote in a text message. "That Rogers would be in charge of the CBC broadcast, is in one sense coming full circle. In the '60s and '70s, MacLaren Advertising and Canadian Sports Network [were in charge], while in the '80s it was Ohlmeyer Communications or Molstar who oversaw HNIC on CBC. So that pill would be easy no matter how many tablets." 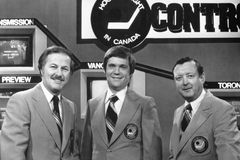