Even in the era of actual NHL dynasties – the Montreal Canadiens of the 1970s, New York Islanders and Edmonton Oilers of the 1980s – the principals were never all that comfortable using the term.

More than one dismissed the notion by describing Dynasty as a television show starring Joan Collins, and not something you could aspire to in the 21-team NHL, where everyone was under the gun to win.

Fast forward to the NHL's current era with 30 mostly well-run teams all governed by a salary cap, and the idea that a handful of teams in a constrictive system could challenge for championships year after year seems truly quaint and old-fashioned.

Yet, while neither team's admitting to it here in Chicago, either, you still have the equivalent of two modern-day dynasties competing for the Western Conference championship – the local Blackhawks, who won Stanley Cups in both 2010 and 2013, against the Los Angeles Kings, who won in 2012.

The Kings, who trail the best-of-seven series 1-0, have made it to the conference final in three consecutive seasons, and they have won 33 playoff games in that span, by far the most post-season wins by any team in the league. This may not be quite the same as Montreal winning five Stanley Cups in a row or the Islanders winning four or the Oilers winning five times in seven years, but it shows consistent excellence nonetheless.

Both Blackhawks coach Joel Quenneville and his Kings counterpart Darryl Sutter played in the dynasty era, and know that as difficult as it was then to keep a team together and to press all the right buttons, it is even tougher now.

According to Quenneville, much of the Blackhawks' success can be traced to the fact that, when they won in 2010, their core group was still "real young" and thus still had a big upside.

"The growth of these young players has been the core of our team since then," said Quenneville Monday, on the first of two off days in the series. "Our team has been built around these guys. Our success is attributed to their competitiveness, their consistency, their will to be as good as they can be on a regular basis. They push each other in a real good way."

The most significant change on the Blackhawks side came in goal – Antti Niemi leaving after 2010 as a free agent, Corey Crawford coming in and establishing himself as a money goaltender.

"When all the teams are so even, the goalies play an even bigger role because there are so many games during the season that are so close.

"And if you have a good goalie, you're going to get a lot of those points at the end of the season," assessed Blackhawks defenceman Niklas Hjalmarsson, who was part of the chorus of Blackhawks players singing Crawford's praises. "For our team we have a lot of individual skill that maybe some of the other teams don't have in this league. Game difference-makers, like Kaner [Patrick Kane] and Hoss [Marian Hossa] and those guys that can go in and pretty much win a game for us.

"We've had pretty much the same team here now for a long time, and we set a high standard inside of our locker room and we're not satisfied unless we win games."

Even though both Sutter and Quenneville adhere to a lot of old-school coaching values, Sutter believes the key to getting to the top and then more or less staying there is being adaptive to the way the game is changing.

"I think Chicago, if you look at the last time they won it (2010), there was a massive overhaul on their team, probably other than their young stars," said Sutter. "You have to be able to adjust to the game, adjust to the rules, adjust to the style. I think that's a big reason why we're both in the conference finals again."

In some ways, the Kings are modelled after those early Islanders' teams. Drew Doughty is their answer to Denis Potvin, Jonathan Quick is combative and competitive the same way Billy Smith was. Anze Kopitar provides the strong two-way presence of a Bryan Trottier and the supporting cast of Jeff Carter, Dustin Brown and Mike Richards conjures up the same winning pedigree of Butch Goring, Bobby Nystrom and Clark Gillies. About the only place where the comparison actively breaks down is The Kings really have no Mike Bossy, although Marian Gaborik has stepped up as a sniper and is leading the playoffs in goals with nine.

One of the interesting sidebars of this series is the battle of Marians, Gaborik and Hossa, good friends for years who have put a moratorium on their personal communications until the series is over.

Hossa, who has advanced to the Stanley Cup final an astonishing four times in the past six years, has moved to the top of the Blackhawks' post-season scoring list, and if the coaches continue to match top line against top line, he and Gaborik will be playing against each other a lot in the days ahead.

Hossa won his first of two championships with Chicago after making it to the final with the Pittsburgh Penguins and Detroit Red Wings the previous two years.

"The whole organization is top class," said Hossa. "Everybody, when they got a chance to play for the Blackhawks, for any player, it's a great opportunity. I'm sure the Kings are a great organization also. They did an excellent job last few years. It's just amazing these two teams are battling for the West again." 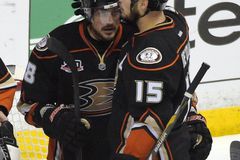