Like a lot of employees starting a new job, Dougie Hamilton was feeling a little queasy when he reported to the Calgary Flames training camp last week.

However, it had nothing to do with nervousness, anxiety or comfort level in his new NHL organization. It was the flu, already making its way through the roster, that left Hamilton unable to do fitness testing and physically under the weather for first few days of scrimmages.

Not exactly how you want to start the new gig. But Hamilton was ready to go on Monday night, when the NHL exhibition season began, playing his first game at the Saddledome with a variety of defence partners, including team captain Mark Giordano, with whom he was also paired during last weekend's scrimmage games.

The strategy was deliberate on the part of coach Bob Hartley, whose goal is to temper the sky-high expectations being placed on Hamilton, considered by many to be the summer's biggest theft, with Calgary acquiring him from the Boston Bruins for a mid-first and two second-round draft picks.

"Dougie Hamilton is coming on a mission, but it's a mission where there's still quite a few lessons to learn," Hartley said. "We haven't even scratched the surface with Doug Hamilton. He's a great young man … [but] he's not the Messiah. He's just a big part of our hockey club, like every other player."

If the Giordano-Hamilton duo stays together, and indications are it might, it could be one of the more potent defensive pairings in the NHL, two highly skilled and mobile defencemen who combined to score 90 points in the league last season. Add Dennis Wideman (62 points) and T.J. Brodie (41) and Calgary suddenly boasts the most potent blueline in the league, though Brodie could miss anywhere from a week to a month at the start of the season, recovering from a broken bone, suffered during Monday's exhibition opener. All the more reason to stockpile depth on the blue line.

Part of what Giordano does so well is help newcomers and young players integrate into the Flames lineup and Hamilton is no exception.

"Whenever you go to a new team, there are differences in the style of play," Giordano explained. "With defencemen, it's when to challenge, when to stay between the dots, little things like that. But Dougie's been great. He's asked questions when he needs to know something, but he moves and skates so well, it's easy for him to make those adjustments.

Giordano was a Norris Trophy candidate last season when Hamilton was playing for the Bruins alongside a former Norris winner, Zdeno Chara. Accordingly, keeping elite company is nothing new for the soft-spoken Hamilton.

"For me, I was really lucky. I got to play with Chara from Day 1 basically, and got to learn from him and look up to him and be like him," Hamilton said. "I can learn from all the 'D' on this team, but just being paired with Gio, you can learn from him and see how he plays. For me, I'm always trying to get better and watch guys and try to take stuff from them."

The Flames and the Edmonton Oilers played split-squad games this past week, Hamilton in Calgary, Connor McDavid in Edmonton, so the two didn't get a chance to renew a history that dates back to the beginning of McDavid's junior career. As a 15-year-old, McDavid – playing for the Erie Otters – received his welcome-to-the-OHL moment from Hamilton, playing for the Niagara IceDogs, a crushing open-ice hit that put McDavid on his backside in his junior debut.

Since Hamilton is signed in Calgary for the next six years (at an annual cap charge of $5.75-million) and McDavid figures to be the centre figure in the Oilers' rebuilding for years going forward, they'll soon be renewing that junior rivalry once the NHL regular season begins.

Hamilton never really made it clear why he wanted to leave Boston, but he says he is happy where he landed and is looking forward to making his mark on a Flames team that wants its defencemen to play an aggressive attacking style – so different from the Bruins' style.

Last week, Hamilton was shepherded around town by Flames forward Joe Colborne, also a former Bruins first-round draft choice. Although Colborne had already been traded to Toronto by the time Hamilton arrived, he noted: "I still have a bunch of buddies in that organization, so as soon as we picked him up, I was on the phone to get some inside scoops on him. There wasn't really a single bad thing to say. A few of the boys said, 'He's just a player. You guys are getting someone who's been playing top-two minutes.'

"Just talking to him and driving him around, you really get to know him and he's a good kid. We're excited to have him."

Hamilton is still at that carefully-choosing-his words-stage of adjusting to life in his new NHL home, but acknowledges: "It's something I have to get used to because I've never been traded before, so I had to come here with new" – here he paused – "new everything.

"It's obviously an adjustment, but it's exciting. It's a new part of my life, a new journey and I'm just taking it all in. I'll do my best and see what happens." 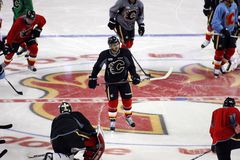 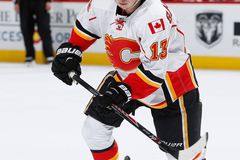 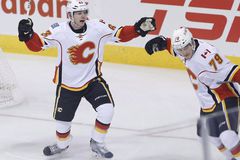 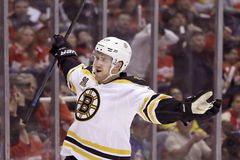 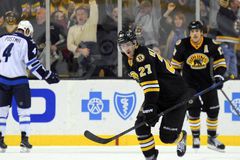