Across the dressing room from where the ageless Jaromir Jagr was holding court, New Jersey Devils' goaltender Cory Schneider was asked about his new teammate. This was moments after the Devils had stolen away from the Staples Centre with a 2-1 overtime win over the Los Angeles Kings, with Schneider and Jagr the two principal culprits in the heist. The Kings held a 27-5 in shots in the first 40 minutes, but Schneider – who'd been getting little in the way of run support from his Devils' teammates since joining them from the Vancouver Canucks – kept the game scoreless, with spectacular goaltending.

New Jersey was better in the third and it was 1-1 heading into overtime, when Jagr produced the game winner, a milestone on two important fronts. It was the 690th goal of Jagr's illustrious NHL career, which tied him for ninth on the all-time goal-scoring list with his former boss and teammate in Pittsburgh, Mario Lemieux. It was also the 121st game-winning goal of Jagr's career, which tied him with Gordie Howe for the most in history.

Jagr is now 41, in his 20th NHL season, and would have broken these marks long ago if he hadn't left the NHL to go to Russia's Kontinental Hockey League for three years. Since then, he's been something of a hockey nomad – spending a year with the Philadelphia Flyers, then dividing time between the Dallas Stars and Boston Bruins last year and now with the Devils as the de facto replacement for Ilya Kovalchuk, who left to go back to Russia last summer.

Jagr has a sort of mythical presence among players and no one is ever quite sure what to make of him, until they play with him. Then, the wows start.

"I wasn't sure what to expect," acknowledged Schneider. "He's come in here and done nothing but work hard and set a great example. He's positive, really builds guys up, whether they're having a tough time. Sometimes, you might be afraid to play with a guy like that, but he's the exact opposite. He makes you feel like a better player and he makes guys better around him."

Jagr is leading the Devils in scoring and it isn't even close really. He has 18 points in 22 games – the next highest Devils scorer is defenceman Marek Zidlicky with 13; and the only other player in double figures is Patrik Elias.

The three, all Czechs, will anchor their 2014 Olympic team and Jagr was venturing, in an interview with the Newark Times Ledger, that his plan isn't just to play in Sochi but to perhaps stick around for 2018, when the Games are in Pyeongchang, in South Korea.

That would make him 46, but Jagr cautioned that he would likely be playing in Europe by then, and the NHL was likely to give the Olympics a pass. Still, that would be a major achievement – to keep going, at that age. Only a handful of players, most notably the recent Hall Of Fame inductee, Chris Chelios, can stay productive into their 40s. As for Howe, Jagr says: "He played until 50. I've got nine years to go."

Jagr has a longer history with Lemieux and their relationship was on his mind after he caught him in the NHL's goal-scoring annals. Next up is Steve Yzerman at 692 and Mark Messier at 694. If Jagr scores another 10 goals this year, he will become just the seventh player in history to get to 700.

"I didn't really have a chance to see Wayne [Gretzky] when he was doing the 200-point season when he was in Edmonton," Jagr said. "When I came in the league I was playing with Mario. He was the guy I was looking up to. I know Wayne got all the records, but to me, I got a better chance to look at Mario. I could see him every day in practice, the way he plays. He was a huge influence on the game I play.

"I was pretty lucky to see him at his best. I tied him, but he probably played 600 less games than me. This is just a number, but he didn't play many games. If he would have played as many games as me, he would probably have 2,500 points and 900 goals."

That Jagr is still playing has a lot to do with his commitment to fitness. Nobody works out after the witching hour more than Jagr and he was at it again Thursday night. After a lengthy post-game visit with reporters, he was off to exercise – even after the Devils had played the night before. As a 40 something, you'd think there'd be a drop-off in his play on the second night of back-to-back games, but coach Peter DeBoer says he hasn't seen that yet.

"His fitness level, he takes care of himself, he doesn't drink. He watches what he eats. He lives to play hockey. There are very few guys who you can say that about, but he truly does."

Zidlicky set up the OT winner, with a neat pass threaded through traffic, but Jagr just took it and hesitated, out waiting the Kings' Ben Scrivens, before scoring top shelf. DeBoer figures it doesn't bear thinking of where the Devils might be without Jagr's contributions.

"Even the poise on the winning goal," said DeBoer. "I don't know too many other players that would have had the patience to hold it and hold it that extra second. You can't teach that, that's why he is a Hall Of Fame player. It's amazing what he is doing at his age, the minutes we are loading him up with, the responsibilities we are asking of him. He played against (Anze) Kopitar's line all night, tonight. He's been incredible."

"Today, I was probably happier than other nights," analyzed Jagr. "We were outplayed. We were outshot. We shouldn't be in the game, but Cory was excellent and he kept us in the game, especially in the first period – and we just couldn't get the legs going. They're a pretty tough team. They don't give you anything for free. It was very tough for us. We should probably lose 5-0, but that's what it is.

"When we lose the game and I would say, 'we played good,' my dad would always say, 'You're not a figure skater. You don't get points for looking good. You got to score goals.' Today was a pretty lucky win but we'll take it anyway."

As for Schneider, he won for just the second time in 10 decisions, even though he has a goals-against-average under 2.00. In four of his starts, the Devils have been shut out. Altogether, the Devils have managed to score just 12 goals for Schneider, so this victory was a long time coming – a little bit of justice served, after a long stretch of plain bad luck.

"I was glad for Schneids," said DeBoer. "He's been waiting for a win … (but) you never saw frustration, you never saw any of that from him. I think the guys appreciate that because I think he recognizes the work ethic was there, it just wasn't going. I think everyone is happy for him." 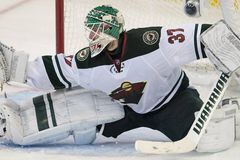