Every year, the Los Angeles Kings hit the road for close to two weeks around the time when the Grammy Awards take over the Staples Centre. And every year, their task is essentially the same: Tread enough water to stay competitive, because all the Kings ever really have to do is make the playoffs, and then good things usually follow.

That formula has worked well for the current regime of coach Darryl Sutter and general manager Dean Lombardi. They let their team hide in the weeds as one of the lower playoff seeds and then use their size, skill, depth and goaltending to wear opponents down in best-of-seven playoff series. Over the past three years, the Kings have played 11 playoff series and won two Stanley Cups.

But this season is starting to look different – and maybe even a little desperate. The Kings, who went into Monday night's game against the Columbus Blue Jackets five points back of the final playoff spot, look as if they are the ones who are wearing down – as if the cumulative effect of all that playoff hockey is finally catching up to them.

The road has been especially unkind. Last year, the Kings had the sixth-best road record in the league (23-14-4), which was identical to their home record. This year, they are 16-6-6 at home but 6-12-6 on the road. So they need to put together a winning streak in order to gain ground on the Calgary Flames, who are currently holding on to the second wild-card playoff spot in the West.

Reasons for the Kings' struggles are varied.

No. 1 centre Anze Kopitar is not playing to the level he was a year ago, and his right-hand man from the 2014 playoffs, Marian Gaborik, has been injured and inconsistent, patterns that have followed him throughout his career. For the first month of the season, the Kings were carried by their That '70s Line – Jeff Carter flanked by Tyler Toffoli and Tanner Pearson, all of whom had sweater numbers in the 70s. But they have cooled off since October; Pearson is out, likely for the rest of the regular season, and Toffoli is just back after recovering from mononucleosis.

But the greatest falling off has been on the defensive side. The Kings opted not to sign veteran defenceman Willie Mitchell to a contract extension, and he left to join the Florida Panthers, where he was immediately named team captain. A month into the season, the NHL suspended Slava Voynov as a result of allegations of domestic violence, and Voynov may not play again for them this season.

Without Mitchell and Voynov, the Kings are missing their second defensive pair. Last year, they won, in part because, when everybody was healthy, they had fantastic defensive depth and were able to play Robyn Regehr and Alec Martinez as their No. 3 pair.

Now, L.A. is weaker overall defensively, and that is reflected in goaltender Jonathan Quick's numbers. A year ago, the Kings won the Jennings Trophy because they had the lowest cumulative goals-against average in the league – 2.02 a game – and that masked their middle-of-the-road scoring abilities. This year, they've just been leakier in goal, but without a comparable improvement on the offensive side of the puck, they're stuck in a cluster of four teams (along with the Minnesota Wild, the Colorado Avalanche and the Dallas Stars) that were playoff teams a year ago but are in danger of falling short this season.

Regehr, in his second stint under Sutter – he was a top-two defenceman on Calgary's 2004 Stanley Cup finalist – believes the team has drifted away from its aggressive identity, telling reporters Sunday: "If you've been around hockey and watched it long enough, you realize that when everyone is aggressive out there, even if there are little mistakes that are made, usually what happens is your teammate will end up being there covering for you. When you're hesitating – 'Should I go, shouldn't I go?' – that's when you really get exposed, and there are major breakdowns that start happening."

All the things that have gone wrong with the Kings might have been offset if they had just been better in overtime and shootouts – they would certainly be in a more advantageous place in the standings. But a league-low 2-12 record after regulation has meant many lost points.

After Monday, the Kings have 29 games remaining, 13 of them on home ice, to sort things out. Otherwise, they risk being the first team since the 2006 Carolina Hurricanes to win a Stanley Cup one year and miss the playoffs the next. As falls from grace go, that would be unexpected. It isn't usually in the DNA of a Sutter-coached team that they would go out with a whimper, not a bang.

Canucks are in a promising yet precarious position
February 8, 2015 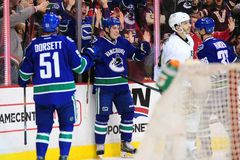 Penguins need Crosby to snap out of his slump
February 8, 2015 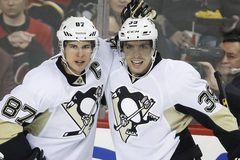 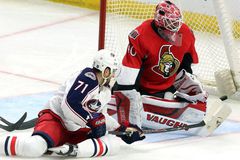