On the early September day when Jonas Hiller arrived in Calgary to pursue his NHL career with a new team, the Flames, the city was paralyzed by a full-scale blizzard. There were officially 18 days remaining in summer, but the Hiller family was confronted by a mountain of snow – proof, if they needed any, of the contrast between Hiller's new gig and the first seven years of his NHL career, when he played goal for the Anaheim Ducks.

Hiller is from Switzerland and once played for a team in the mountain resort town of Davos before coming to the NHL, so winter weather isn't exactly a new concept to him. "At the same time," he said a bit ruefully, "you get used to the nice weather in California pretty quick."

Life in Southern California suited the Hillers for most of the time they were there – until the Ducks decided in the midst of last year's surge to the Pacific Division title to turn the goaltending duties over to rookies Frederik Andersen and John Gibson.

Ultimately, the Ducks shed both regulars in net, Hiller and Viktor Fasth. Fasth was traded to the Edmonton Oilers, where he is competing for the starter's job with another California refugee, Ben Scrivens, most recently with the Los Angeles Kings. Hiller was allowed to pursue free agency once his contract expired, and signed a two-year, $9-million (U.S.) deal with Calgary.

If there is any hope for a Flames turnaround this season, it will be because the new face in goal solidifies a position that has been in flux since Miikka Kiprusoff's retirement.

Hiller is looking forward to playing against his former teammate Fasth. The two put up virtually identical numbers in the lockout-shortened 2012-13 season – 15-6-4 for Hiller, 15-6-2 for Fasth, during the Ducks' rise to the top of the ultracompetitive Pacific Division.

"I think we had a great year, and even last year I thought I had a really good year up until the Olympics," said Hiller. "After that, I didn't feel like the coaching staff really had confidence in me, and when that happens, it's always tough to play at your best.

"I'm definitely excited to have a fresh start. Talking to the coach [Bob Hartley], talking to management, they want me to have success, and that definitely makes your life easier. It keeps your mind free to just go out there and play as good as you can, instead of worrying about giving up bad goals and having to prove yourself every night – not just to the public, but to the coaching staff and everybody else. That's definitely a nicer way to feel comfortable, if you know they have your back."

There is a recent precedent in the NHL, that one team's castoff in net can be another's successful reclamation project. Last season, for example, Ben Bishop started out as No. 3 in the Ottawa Senators' goaltending pecking order and finished as a full-fledged Vézina Trophy candidate with the Tampa Bay Lightning. Before that, Sergei Bobrovsky went from being part of the problem in Philadelphia to the absolute solution in Columbus, where he won the Vézina two years ago. The player Bobrovsky supplanted with the Blue Jackets, Steve Mason, resurrected his career with the Flyers. And so on.

The Flames signed Hiller with the understanding that he has a clear shot at the No. 1 job in goal, competing mostly with Karri Ramo, a Finn who emerged from a clutter of Calgary goalies to play well in the second half last season.

"At the end, you always have to compete no matter where you go, but definitely, I felt like I have a chance here," said Hiller. "It's a young team with a lot of talent around. I hope my experience over the last years in different leagues, in different situations, can help out the team."

And if the weather is slightly unco-operative?

"I'm kind of used to the snow and the cold," said Hiller. "I didn't mind it when I saw it a few weeks ago. It made me feel I was back in that [Davos] era."

Duhatschek: For Devin Setoguchi, when one door shuts, a one-year window opens
September 23, 2014 Duhatschek: Can Johnny Hockey hack it in the NHL?
September 18, 2014 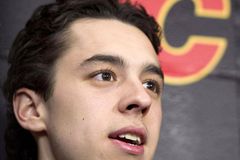 With camp just around the corner, ‘Johnny Hockey’ turning heads with the Flames
September 16, 2014 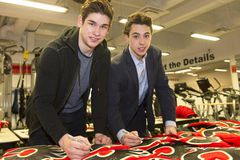