On the morning after, the Calgary Flames were sifting through the wreckage of a 6-1 clobbering by the Anaheim Ducks and it didn't look any prettier after the fact.

Yes, the sun did come out, but this is Southern California, in the midst of a record drought. The sun always shines here.

Even so, the mood was surprisingly upbeat in the Flames' camp. With two days to ponder a revised game plan and a growing injury list to sift through, coach Bob Hartley made Friday's Honda Center practice optional. Hartley announced that Karri Ramo would be his Game 2 starter in goal and that he expected Micheal Ferland to play, despite leaving the opener with an undisclosed injury after playing less than six minutes.

On Thursday, 11 skaters saw more ice time than rookie-of-the-year candidate Johnny Gaudreau, who sat and watched the third period from the bench, Hartley concerned that the Ducks were taking too many liberties with the creative 5-foot-7 forward.

Gaudreau isn't used to sitting and acknowledged that Friday: "It was difficult. Guys are out there, sacrificing themselves in a five-, six-nothing game. It's tough not to be out there, but I think you've got to listen to the coach."

"I believe he wasn't okay with this," Hartley added. "I told him early in the third period he wasn't playing any more and I told him why. Johnny wants to play as much as he can. This young man is a great competitor, but my job is to do what's best for the organization – and what was best last night was to keep him on the bench. There was no sense in exposing him out there.

"I was not surprised by his reaction. He was not happy."

The laundry list of what the Flames need to do differently to compete with the Ducks does not require an advanced math degree. Defensively, they need to get better inside position on the Ducks' forwards, who steamrolled their way to the net at will against Calgary's smaller rearguards.

Offensively, they needed to get far more traffic in front of Ducks' goaltender Frederik Andersen, who had a solid and efficient night in goal, but except for an early breakaway save against Josh Jooris, wasn't tested much.

A superhuman effort from Ramo in goal wouldn't hurt, either. The Flames were underdogs heading into the series and usually the underdog's best chance occurs when a goaltender morphs into the second coming of Georges Vézina and just stops every puck.

Naturally, Ramo was excited to get his first-ever playoff start, after two consecutive appearances in relief of Jonas Hiller, noting that while the Ducks are "talented and skilled and not afraid to go the net … it's still just a hockey game."

Hartley was in there, promoting good cheer, the way he usually does.

"I can't fault the effort on our team," Hartley said. "Those guys, they always prepare well. They always go hard. Are we the perfect team? No, we're still a young hockey club and we're learning every time we step on the ice. That's the way it is. Our players try to play the right way. Will we always have our execution as good as we like, or play our best game? No. But it's a game of mistakes and those guys go through the wall for us.

"This team has no quit."

Ultimately, the Flames came to Southern California to get a split, something that is still within reach. There is a perception that the Flames are simply overmatched against the Ducks, a team that finished 12 points ahead of them in the regular season and seems singularly focused on bringing a second Stanley Cup to Orange County.

"If we had listened to everyone's perception from the start of this year, we wouldn't have been an NHL hockey club," Hartley said. "I don't know which league we would have played in, but it wouldn't be the NHL. So we learned to control what's on the inside. I have full trust in my players.

"If we're too small – as much as you can stretch Johnny Gaudreau before Sunday night, he's not going to be 6-1. He is who he is, and all our players are who they are. We learned to battle as a team. We're going to show up, the same players, the same size, the same weight."

Gaudreau could be without his regular winger, Jiri Hudler, which will require some major line shuffling. The Flames travelled with nine extra players and if Hudler can't go, Hartley could either reinsert Markus Granlund, Mason Raymond or perhaps gigantic David Wolf, who would provide a greater physical presence if he gets in.

"We didn't like how we played that game," said Gaudreau philosophically, "but the series is just 1-0, whether we lost 2-1 or 6-1. All season long, there have been doubters. We just worry about ourselves. We believe in what we can accomplish – and we're excited for this next game." 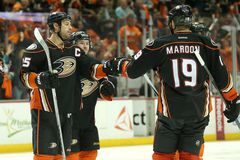 Ducks’ depth will be on full display against Flames
April 30, 2015 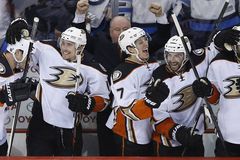 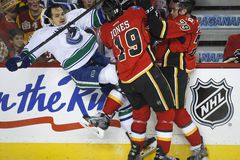