Long before he got his popular nickname, long before the awards and the fame started to come, Johnny Gaudreau showed up in Dubuque, Ill., to play for the Fighting Saints of the USHL at the start of the 2010-11 season.

Dubuque's coach was Jim Montgomery, a former NHL player from Montreal, once traded straight-up for Guy Carbonneau. Montgomery saw the same thing everyone does when they first lay eyes on Gaudreau – an imp of a player. If you knew he was going to become a professional athlete, you would guess he'd be a jockey.

Early in the season, Montgomery took his Fighting Saints to Nebraska to play the Lincoln Stars, a team he described as "the Broad Street Bullies" of the USHL; they were always the biggest and toughest team.

"Morning skate, the opposing coach saw our team kicking the soccer ball around and says, 'Geez, that's nice, they let their stick boy warm up with them.' After the game, we'd beaten them 3-2 and I think Johnny had a goal and two assists and the coach comes up to me and says, 'Wow, that little stick boy shoved it up our asses.'"

That little stick boy has been underestimated at every stop along his hockey-playing path.

As the NHL's all-star weekend begins Friday in Columbus, Gaudreau – the NHL's reigning rookie of the month – attends as one of six rookies chosen to participate in the skills competition. He has 35 points this year, second among NHL rookies, five behind the Nashville Predators' Filip Forsberg.

Trying to nail down Gaudreau's exact size is problematic, since it's listed differently practically everywhere you look – and none of the dimensions accurately reflect just how small he is. The former NHL MVP Martin St. Louis is also short – 5-foot-8 – but he is not small, and has legs the size of tree trunks. Gaudreau is both short and slight, rarely a winning combination in a league where small players generally have to prove they can play (frequently, big players have to prove they can't).

Officially, Gaudreau is listed as 5-foot-9 and 150 pound in the NHL's guide and record book; he's 5-foot-9 and 157 in the Flames media guide. He is unquestionably shorter than that.

There has always been a place for some smallish players in the league, no matter what generation you consider. Camille Henry and Henri (The Pocket Rocket) Richard were excellent players in the 1950s and 1960s. Calgary has been a home to many small players, from Joey Mullen, who played on their 1989 Stanley Cup championship team and eventually made the Hall of Fame, to Theo Fleury, the second leading scorer in franchise history, and even St. Louis, a two-time NHL scoring champion who ultimately had to leave for Tampa to make his NHL mark.

But style-wise, Fleury and Gaudreau are completely opposite players. Gaudreau is slippery. His game has a now-you-see-him, now-you-don't quality that involves sidestepping the defensive giants trying to plaster him into the second row. Fleury embraced contact. He dished out more than he received.

Calgary Flames coach Bob Hartley had Fleury for a time in Colorado and now has Gaudreau on his team.

"Teams will always be looking to get big because of the wear-and-tear of the season and the grind of the playoffs," Hartley said. "But at the same time, you look at Johnny, the way he's competing in his first season and it's pretty amazing. He hasn't even played in all NHL buildings yet and he's had created quite an impact – an impact on our team and an impact around the league.

"With Johnny, it's all about his quickness in tight areas, his above-average hockey sense and his passing skills that are allowing him to really grow in the NHL."

"Theo was more of an in-your-face player," Hartley said. "He was more like Mighty Mouse. We'd always play Dallas in the playoffs; [Richard] Matvichuk and [Derian] Hatcher were chasing Forsberg and who was chasing those two? It was Theo. I would say, 'Theo, you're going to get killed,' and I can't even repeat what he was answering back. But that's who he was. Johnny is another small player but with a totally different style, totally different make-up – and most importantly in a totally different league."

Flames captain Mark Giordano, who is accompanying Gaudreau to Columbus this weekend, says that the rule changes, introduced by the NHL following the 2004-05 lockout, to limit hooking, holding and interference accelerated the progress of a number of smaller players.

"I mean, Johnny, me, Russ [Kris Russell], guys who move the puck, we've all benefited from it," Giordano said.

"For a guy like Johnny, I don't know if he can play in the NHL if there's a 6-foot-5 guy who could grab on to you and hold on and pin you in the corner for three seconds. That's not taking anything away from his skill. His skill has always been there and it's always going to be there. But he is allowed now to come out of the corner and spin off guys without being grabbed on to.

"Ask any defenceman on our team: I'd much rather play against a bigger-sized guy who I know I can keep up with, especially when they're spinning out of the corner, than a small guy, who spins off you and has a step every time. You can't grab him; you can't do anything to him. They're really hard to play against; and there's a lot of them in the league now, the little guys who are really shifty. And bottom line, I think they're the hardest guys to play against."

But where other small players may be broad and muscular, Gaudreau practically looks frail.

"He was 5-foot-7, 134 when I met him," Montgomery said. "We knew when we got him that we were getting someone who was much more intelligent, in terms of his vision and hockey sense, than anyone else that usually gets on the ice. To be honest, in our training camp, the first couple of days, he didn't do much, and I could tell some people in the organization were wondering, 'Did we commit to a kid that's never going to play that much?' Then as the camp went on, everyone was like, 'Okay, I get it.' Because when he plays with better players and gets used to the speed, he just adjusts. It's incredible. I knew he'd be good early, but I thought the wear and tear would get to him and he'd slow down in November.

"Instead, he took his game to another level. I don't know how he does it, because I was a smaller player and I would break down routinely in an 80-game season and have no energy. I just watch him. He looks better every time I see Calgary. I'm watching the game against Chicago and [Duncan] Keith and [Brent] Seabrook are out against him and he's protecting the puck for about 10 seconds against those guys and he's doing it because of his edges and his creativity and they're backed off because they don't know where he's going. And that's what he does to people.

"It's like Patrick Kane: Patrick Kane's not the biggest player in the world but he has the puck more than anybody in the NHL because you don't know where he's going. He buys time and space, like special players do."

Gaudreau has played more games this year than he did all of the last three, and though his junior schedule was more complicated than his college schedule, nothing compares to the grind of the NHL. He and Hartley sat down in early January to discuss how the second half might unfold – and how he could conserve his energy to finish the year on an up note.

"I'm really taking that pretty seriously," Gaudreau said. "In college, you'd get those weeks off, so you could work out and study and didn't have as much of a game-practice-game-practice schedule, so it's a bit of a new thing for me."

To Gaudreau, the biggest change in adjusting to the NHL is the way teams aggressively pinch their defencemen to keep pucks in the offensive zone. It makes exiting the zone far more challenging than it did in college.

"For me, it's the defencemen crashing down the walls on the wingers," Gaudreau said. "In college, teams tended to back off a little more and let us take the puck out of our end a little more. Now, you've got 6-5, 200 and whatever flying down on you and it's a lot more difficult than it was in college."

According to Montgomery, Gaudreau's personality is such that even as he gets a lot of publicity, he is so modest about his success that teammates generally don't feel any jealousy.

"They have such a young team that has such energy and exuberance to them, and I'm sure Johnny's one of the main reasons for that. You sit on the bench and watch him do the things he's doing at the NHL level; at 5-foot-8, it makes you giggle and think, 'I can do this. I'm going to go now.' He's not doing it because he's small; it's because he's so talented and fearless." 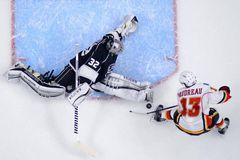 Johnny Hockey is NHL first star of the week
December 29, 2014 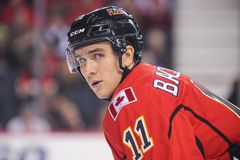