The NHL postseason is unexpectedly on the minds of Calgary fans after the Flames' solid play this season, but for coach Bob Hartley, his team has been playing playoff rounds all season.

The reason? Hartley divides the NHL schedule into seven-game segments to mimic a traditional playoff series – a tactic he believes keeps the team's focus on achievable, short-term goals.

So, for example, early in his press briefing Monday, Hartley reminded reporters that Tuesday's date with the visiting St. Louis Blues marked the end of the Flames' 10th seven-game series of the year. The Flames are a remarkable 7-1-1 in the first nine, which is why they are where they are – third in the Pacific Division, on pace for 96 points with a chance to qualify for the NHL playoffs for the first time since 2009.

According to Hartley, the value of breaking the season down into bite-sized segments was greater during the dog days, because it helped keep the focus on the smaller, day-to-day picture.

"Early on, since we had a young group, I just didn't want them to think, with 80 games, there's plenty of time to catch up," said Hartley. "We all know that once you're seven, eight points behind with 10 to 15 games to go, and you're in a logjam with other teams, it's going to be unbelievably tough to make it.

"I was trying to get them in the mindset to avoid this. I would say probably December, January, I felt those seven-game segments really hit home. Now, they're pros. They're adults. They know our situation. They know how many games are left to be played – and they know every game is vital. We keep repeating the same song, but it seems to have worked since Day 1, so why change it?"

There's no reason to now. Scoreboard-watching is not something they've done much in Calgary lately, and every player approaches the home stretch differently. According to forward Joe Colborne, the main goal is to "keep the focus on the here-and-now, and not look too far down the road. That's what's helped us maintain consistency."

"Honestly, I don't think of it as 'How many points will it take to make the playoffs?' I know some guys do that. I look at it as, 'At this point in time, are we in or out of the playoffs?' and 'How many games are left to be played?' because if somebody has games in hand, that's a factor too."

The schedule maker has made things interesting in the Western Conference: The Flames finish the season with a home game against the Los Angeles Kings and then one on the road against the Jets in Winnipeg.

Conceivably, those final games could decide the final wild-card spot.

After Tuesday's game against St. Louis, the Flames complete their homestand with games against four teams outside of the playoff picture – the Philadelphia Flyers, Columbus Blue Jackets, Colorado Avalanche and Dallas Stars. A surge would give Calgary a cushion for the five-game road trip that follows.

One of the lowlights of an otherwise successful season came in October, in the Flames' first game against St. Louis – a 4-1 loss – in which they were badly outplayed.

"That was kind of a game where we sat back afterward and said, 'Oh, that's the level we have to get to,'" said defenceman Kris Russell, whose career received a major boost after he was traded from the Blues to the Flames two years ago. "They're a top team. There's a reason people talk about them. They've got a lot of depth in their lineup."

St. Louis has gone on to have another good year. The Flames, in turn, learned from the Blues, and lost just four times in regulation in their next 17 starts.

"They're making a push for the top of the Western Conference, and we're making a push to be a playoff team," said Hartley. "At this time of year, talent and preparation will dictate part of the game, but so does controlling your emotions, playing at a high pace, and making sure you find another gear. That's what we're telling the players all the time: Let's get more juice and pep into our game, because tomorrow? It's not going to be a picnic."

Duhatschek: These Anaheim Ducks are far from lame
March 11, 2015 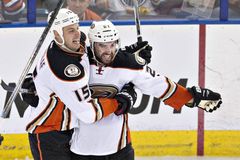 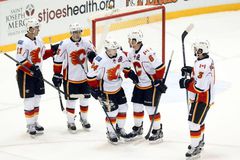 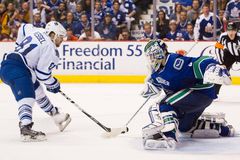 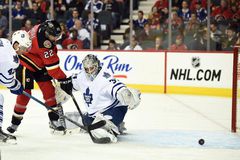