This year was supposed to be different.

This year, the Edmonton Oilers were supposed to score more goals, give up fewer and evolve into the team that everyone thought they could be, given how they've missed the playoffs for eight consecutive years and mined all those high draft choices as a result.

Instead, the start of 2014-15 looks an awful lot like the start of 2013-14, when the Oilers won just four of their first 21 games and were effectively out of the playoff race with 60 games left in the season.

The goaltending continues to leak, the offence (except for Taylor Hall) is offensive, and the team looks completely disorganized in its own zone. With stability behind the bench – Dallas Eakins returning for a second year after a carousel of coaches had been hired and fired prior to his arrival – the Oilers were supposed to be taking the first tentative steps down that turnaround path.

Instead, they look to be behind even their southern rivals, the Calgary Flames, who were supposed to trail the Oilers in terms of the schedule of their rebuild. Thus far, Calgary is getting exceptional goaltending, has developed a key shutdown defence pair in Mark Giordano and T. J. Brodie, and has forged a clear blue-collar identity under coach Bob Hartley.

On the same night when the offensively challenged Arizona Coyotes were scoring seven goals against the Oilers, Flames goaltender Jonas Hiller was stopping 50 shots to help Calgary beat everybody's Stanley Cup favourite, the Chicago Blackhawks. A night earlier, when the lowest-scoring team in the Western Conference last season, the Los Angeles Kings, put six more past Edmonton, Calgary's other goaltender, Karri Ramo, was backstopping a shootout win over the Nashville Predators. Two big road wins for the Flames, knocking two opponents from the ranks of the previously undefeated. And two crushing road losses for the Oilers.

Goaltending can do incredible things for you; it can mask others sins.

In Calgary, for example, the smallish, highly touted rookie Johnny Gaudreau has yet to score a point, but it doesn't matter. The Flames can afford to be patient with Gaudreau because their record was 3-2 heading into Friday night's date with the Blue Jackets in Columbus. Same goes with second-year centre Sean Monahan, who suffered a virulent case of early season flu. He's just starting to find his legs again, but the Flames are thriving without his scoring.

Unlike last year, the Oilers made no big promises going into the season, speaking more guardedly in terms of getting things turned in the right direction. Edmonton's hopes for the season largely rested on a revamped goaltending duo (Victor Fasth and Ben Scrivens), two new blueline veterans (Mark Fayne and Nikita Nikitin), and a unnecessarily risky decision to slot 18-year-old rookie Leon Draisaitl in the No. 2 centre job.

The Oilers gambled that they could trade Sam Gagner and replace his minutes from within, with Draisaitl. It hasn't happened, partly because top centre Ryan Nugent-Hopkins was sidelined for the last couple of games with a back injury. As a result, the Oilers dressed the weakest centre-ice corps in the league in those two games. Moreover, Fasth tweaked his groin in a blowout loss to the Kings, which forced Scrivens to mop up against his former team.

Scrivens joined the Oilers in the middle of last season and stole a couple of games, fuelling the hope that he could provide the sort of goaltending that permits younger players get away with their inevitable defensive gaffes. So far, they're still hoping. Against Arizona, Scrivens was guilty of puck-handling errors that characterized his play in the Oilers' home-opening loss to the Flames.

According to coach Eakins, the effort is there, just not the execution.

"The guys are trying; it's the big mistake or the bad luck that is just killing us right now," said Eakins. "The luck will change, but we have to eliminate the big mistakes."

Sooner would be better than later in Edmonton. Friday's date with the Vancouver Canucks starts a seven-game homestand that features five opponents that missed the playoffs last year. It is an opportunity to salvage something from a start that couldn't have been much worse. Is that the coach's fault? The manager's? The goaltending? The defence? Or all of the above?

No one's in any imminent danger yet, but if the trend continues through the winnable games during the rest of October, heads will roll. They always do. 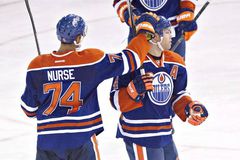 Mirtle: A goalie controversy? That’d be good news for the Leafs
October 16, 2014 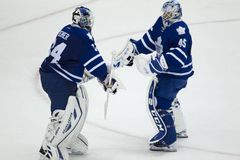 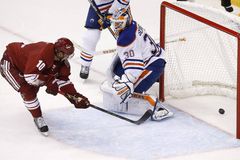