Just because the firing of Alain Vigneault was inevitable didn't make it fair or right.

Of course, as anyone involved in the world of professional sport can tell you, you stop believing in the concept of fair or right soon after you realize there's no tooth fairy either.

The Vancouver Canucks made it official Wednesday, firing Vigneault, their long-time head coach, plus assistants Rick Bowness and Newell Brown.

Vigneault knows how it works; wouldn't have been surprised by the outcome; and in some ways, was probably relieved when the end finally came, some two weeks after the Canucks were swept out of the NHL playoffs in four games by the San Jose Sharks.

Vigneault was a coach, hired by the previous regime, who convinced the incoming general manager, Mike Gillis, that he was the right man for the job. But that leaves you on a fairly short leash – and after buying time by bringing Vancouver to one victory of the 2011 Stanley Cup championship, Vigneault was down to his last chance to get into the winner's circle this year.

Unluckily, this happened to be a lockout year, which made it difficult for Gillis to clear that pesky logjam in net, without sacrificing an organizational asset, Roberto Luongo, for essentially nothing, which he was reluctant to do.

Never mind it would have clarity to the position and to the team – a case of addition by subtraction, even if it meant you didn't get the trade you wanted, or thought you deserved. Sometimes, being an NHL GM is like being a poker player, where half the battle lies in knowing when to gracefully fold your hand.

So it was left for Vigneault to manage a largely untenable situation – two players, friends, both aspiring to the No. 1 goaltending job, creating a controversy every time they lost a game because there was always a viable option sitting on the bench.

It didn't help Cory Schneider's confidence, it didn't help Luongo's – and all of their attempts to make light of the situation, with the little TSN docudramas – didn't change the fact it was a large and largely unnecessary distraction for a team with a limited championship window that frittered away a golden opportunity this year.

There are certain things coaches can control and other things that are beyond their reach. They are not medical miracle workers and so, forward Ryan Kesler's brittleness and inability to play the way he did in 2010-11, when he won the Frank J. Selke Trophy and scored 41 goals, isn't his fault. Nor is the organization's inability to develop the sort of secondary supporting cast up front that teams thriving in the playoffs – Boston Bruins, Pittsburgh Penguins – are able to develop.

Gillis's solution at the trading deadline was to add a smallish centre, Derek Roy, to a team that was swatted aside in consecutive playoffs by the behemoths of the Los Angeles Kings and the Sharks.

The Sedin twins plod along, but are no longer the dominant Hart Memorial Trophy candidate, top-of-the-charts forwards they once were – and there is no Logan Couture coming along to take heat off, the way the Sharks have managed to do with Joe Thornton and Patrick Marleau.

These are all personnel issues, and by the end of the Sharks series, you could see it in Vigneault's words and his body language. He was out of answers. He had pushed every button he could push and this year's playoff edition of the Canucks just wasn't going to get it done.

It was clear his time was up. Sometimes, seven years in an organization is enough – and a fresh start is necessary, even for a coach with a 313-170-57 regular-season record, who won a Jack Adams Award as the coach of the year and finished as runner-up two other times.

Gillis will now get a chance to stamp his own final mark on the organization – and he needs to get this hire right. Every GM gets to put a coaching scalp or two on his belt before his own neck is on the line.

It is hard to imagine someone with Dave Tippett's defensive pedigree would interest him, given how Gillis is committed to playing an up-tempo style. Lindy Ruff can coach that way, but whether Gillis would reach for another veteran coach after letting one go seems unrealistic.

So then it's down to the bright young men of the coaching profession, one of whom – Jon Cooper – was already scooped up by the Tampa Bay Lightning, leaving probably Dallas Eakins (AHL's Toronto Marlies) at the top of the available list. (Given the bad blood that exists between the Toronto Maple Leafs and Canucks organizations, hiring someone away from a Dave Nonis-led organization would represent an odd marriage of convenience.)

As for Vigneault, he is a smart, funny guy, who did admirable job of defusing potential distractions and keeping the Canucks mostly on track in the regular season. He will land on his feet – maybe in Dallas, maybe even in Colorado, or maybe as a mid-season replacement next year, after he's had a chance to catch his breath.

It isn't necessarily right or fair he should be looking for work after all the good he did in Vancouver. But it was time. 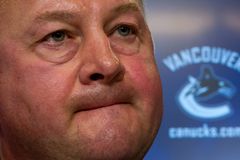 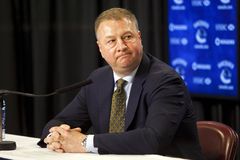 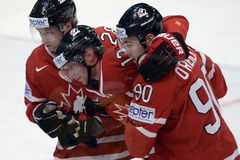 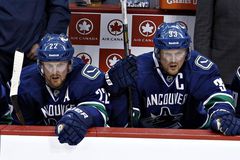 Canucks fall from ranks of elite and rejoin chasing pack
May 8, 2013 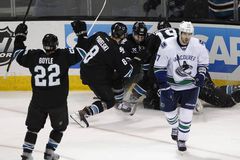