Ed Belfour is preparing to give up his Olympic gold medal for an opportunity to go into business with his son.

The medal the Hockey Hall of Fame goalie won representing Canada at the 2002 Salt Lake City Games is one of 66 pieces of personal NHL memorabilia Belfour has put up for auction. The objective is to raise enough seed money for Belfour and his 26-year-old son, Dayn, to go forward with their plan to open Belfour Distilleries.

"It's definitely hard to part ways with some of this stuff I've kept since high school," Belfour said by phone from his home outside of Dallas this week.

"But I have the memories and I'll never forget them," he added. "This is a chance to get together with my son and start a business, the next chapter of our lives, and hopefully turn it into a world-class distillery where our bourbon is known all over the world."

The Belfours have spent the past two years researching bourbons and whiskeys and establishing a business plan. They hope to have the distillery open within the next year.

The auction is being held online and conducted by Quebec-based Classic Auctions, which specializes in selling hockey memorabilia. Bids can be submitted through Tuesday night.

Belfour's items include a jersey he wore in helping the Dallas Stars beat Buffalo in six games to win the 1999 Stanley Cup title. There are also game-worn masks, autographed jerseys and sticks, and the 13-inch replica of the Vezina Trophy Belfour won in 1993.

The prize of the lot is the Olympic medal, touted by Classic Auctions as being the first 2002 men's hockey gold medal to be placed up for auction. As of Friday, the medal has attracted a high bid of $25,901.

The medal comes in a box that includes the signatures of IOC President Jacques Rogge and former U.S. presidential candidate Mitt Romney, who was President of the Salt Lake City Olympic committee.

The medal means plenty to Belfour even though he never saw game action as Canada's third-stringer behind Martin Brodeur and Curtis Joseph. It was a team that beat the United States 5-2 and win Canada its first men's hockey gold medal in 50 years.

The trouble for Belfour is that he accumulated so much memorabilia that it no longer fit his trophy cases.

"It was collecting dust in the attic," said Belfour, who consulted with former Stars teammate Brett Hull and his father Bobby, who also sold items through Classic Auctions. "It makes me feel good that my stuff will end up in some very good collectors' hands."

Classic Auctions President Marc Juteau said Belfour's items have generated interest because of the gold medal and also because goalies of Belfour's calibre don't often place items up for auction.

"There's only a few goalies who have parted with their memorabilia so far," Juteau said. "And that includes nice goalie masks that were used in the NHL. Those are quite scarce and sought-after."

Belfour was a two-time Vezina winner and the NHL's 1991 rookie of the year during a 16-plus season NHL career that ended with the Florida Panthers in 2006-07. His 484 career wins rank third on the NHL list, and he led the NHL in fewest goals allowed four times.

Belfour played the 2007-08 season in Sweden before retiring.

At 50, Belfour plays hockey — defence, not goalie he said — in a men's league in Texas.

And he still thinks he can defend the goal if some NHL team gave him a shot.

"Oh, I can play tomorrow," Belfour said, breaking into a laugh before correcting himself. "No, I might need a couple of days to get back in shape a little bit." 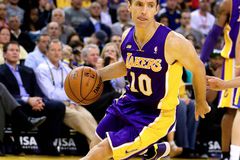 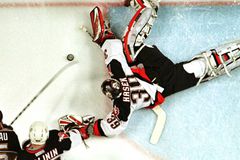 Is the Hockey Hall of Fame within reach for Roberto Luongo?
January 7, 2015 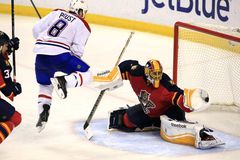