Even the most hard-core hockey fan may not know the name John Harms, who until Monday night was the only player in NHL history to score the first three goals of his career during the Stanley Cup finals.

Gaudreau, who was called up from the minor leagues on April 29, scored the go-ahead goal three minutes and 45 seconds into the second period to lead the Nashville Predators to a 4-1 victory over the Pittsburgh Penguins, evening the best-of-seven series at two games apiece.

Game 5 is scheduled for Thursday, back in Pittsburgh, where the Penguins hope their fan base can match the raucous atmosphere that Nashville's supporters produced over two wild and entertaining nights at the Bridgestone Arena.

Gaudreau, 24, is playing for Nashville now, largely because of a season-ending injury to the team's No. 1 centre, Ryan Johansen. He has had a magical run of it, scoring three times now in the final. Harms, who played a total of 43 NHL regular-season games, accomplished the same feat for the 1944 Chicago Blackhawks.

The concept of an unknown playoff hero is not exactly new to the NHL postseason lore, but Gaudreau's rise to prominence is even more compelling than most. He wasn't drafted in junior, but eventually played three seasons in the Quebec Major Junior Hockey League and won a Memorial Cup in 2012. He has spent most of the past three seasons playing for the Predators' American Hockey League affiliate in Milwaukee, though there was a short detour to Cincinnati of the ECHL in his first pro season, 2014-15.

He signed an NHL free-agent contract with Nashville in January, 2016. The $595,000 they're paying him per season must seem like money well spent now.

His pivotal goal, which broke a 1-1 tie, was as unique as his backstory. Just after Predators' goaltender Pekka Rinne made two 10-bell saves against Jake Guentzel and Chris Kunitz, Gaudreau tried a wraparound at the other end of the rink, which Penguins' goaltender Matt Murray appeared to save.

Play continued for another 35 seconds before the official scorer blew the horn to stop the action. The NHL situation room had reviewed the sequence in their Toronto war room and ruled that Gaudreau's shot crossed the line before Murray punched it out with his glove.

That proved to be a critical momentum swing, given that Pittsburgh had been carrying the play but couldn't break through against Rinne, who was excellent again after two so-so outings to open the series.

On a night when the Penguins' Sidney Crosby was arguably the best player on the ice and scored his team's only goal, Nashville also received goals from Calle Jarnkrok, Viktor Arvidsson and Filip Forsberg – which came into the empty net, with 3:23 remaining in regulation, Pittsburgh pulling out all the stops trying to get back in the game.

Arvidsson had 31 regular-season goals but had been mired in a deep slump before he finally broke out for an important insurance goal before the second period ended. On the play, centre Mike Fisher – celebrating his 37th birthday – made a diving one-handed pass to Arvidsson, who slipped behind the Penguins defence and buried a shot on a breakaway past Murray on the glove side, where the Predators have been aiming a lot lately.

Crosby's goal, on a first-period breakaway, was the 161st playoff point of his career, moving him into 20th place on the all-time list, past such luminaries as Gordie Howe, Mike Bossy, Al MacInnis and Bobby Smith.

As good as Crosby was, he didn't get much support from the rest of his team. Guentzel, who'd been exceptional in these playoffs, had oodles of scoring opportunities again, many of them set up by Crosby, but couldn't finish on this night.

Penguins' coach Mike Sullivan juggled his lines freely as the game progressed to try to spark his team's offence, but to no avail.

The Penguins look as if they're fatigued and running on fumes after two runs deep into the NHL playoffs.

The only good news for Pittsburgh is that there are two scheduled days off between all of the remaining games in the series.

However Game 5 turns out, someone will be in a position to win the Stanley Cup Sunday when the series returns to Nashville.

Until last night, Murray had been 7-0 following a playoff loss in his short NHL career. It was also just the third time in 89 career gamesin which he's lost back-to-back games.

The more experienced goaltender, Rinne, has been exceptional at home in these playoffs – nine wins in 10 games – but he will need to be good again when the series shifts to Pittsburgh, where the Predators won't have their energized crowd to provide inspiration. 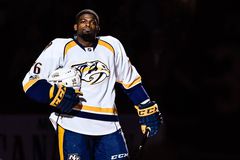 Predators prey on Penguins 5-1 with help from boisterous fans
June 3, 2017
Follow Eric Duhatschek on Twitter @eduhatschek
Report an error Editorial code of conduct
Due to technical reasons, we have temporarily removed commenting from our articles. We hope to have this fixed soon. Thank you for your patience. If you are looking to give feedback on our new site, please send it along to feedback@globeandmail.com. If you want to write a letter to the editor, please forward to letters@globeandmail.com.
Comments