It's difficult to decide which is more shocking.

Erik Karlsson back on the ice, playing – or Daniel Alfredsson on Twitter.

Both happened Thursday night in Washington. Karlsson, the 22-year-old Norris Trophy winner back early from surgery to repair a sliced Achilles tendon; and not only back in his Ottawa Senators uniform, but taking the first shot of the game and setting up both goals in a 2-1 overtime victory over the Capitals that clinched a playoff berth for Ottawa.

And then, at 10:51 p.m., just before the charter took off for home, @DAlfredsson – confirmed by the 40-year-old Ottawa captain Friday as the real thing – sent out its very first tweet: "It's a beautiful day! So proud of the boys, and great to have Erik back!"

Great indeed, and not much expected given the shortened season and the severity of the injury. It was just 10 weeks earlier that the skate of Pittsburgh Penguins forward Matt Cooke sliced through 70 per cent of Karlsson's tendon – Karlsson falling to the ice with a look on his face not dissimilar to Edvard Munch's The Scream.

They said it would take four to six months for the heel to heal. He said two months. He turned out more right than the experts.

And what a two months it was. From hobbling on crutches and cast to cast alone to old-man walking slowly along the arena corridors in sneakers. He was soon walking without aid, but stiffly and carefully. He tried skating, slowly. He shot pucks at the doctor and beer-league goaltender, Don Chow, who did the surgery. He then tried light practice, then light contact, then full contact. And three games before the end of a season that was supposed to be hopeless for the Senators – star forward Jason Spezza also lost, star goaltender Craig Anderson lost for a considerable period – he came back and made sure they made the playoffs by setting up Sergei Gonchar's winning goal in overtime.

"It's been a long time since I've been part of that kind of feeling when the last shot goes in," Karlsson said on Friday. "It makes you feel better when you wake up. Today was a really good morning."

He now wears special protective socks to prevent another such cut from another skate. He still finds them uncomfortable but knows their potential value is worth a little discomfort. "It doesn't really matter what you wear," he joked. "I can play in bare feet if I have to."

The comeback story could hardly be sweeter for the large film crew from Sweden that is in Ottawa preparing a one-hour documentary on the rising NHL star who, strangely, is not all that well known back in Sweden. At least for the moment.

Anderson claimed he wasn't at all surprised by Karlsson's impressive return. "He's special," said Ottawa's No.1 goaltender. "He has the determination and willpower to do anything."

"The difference he makes in our team is significant," head coach Paul MacLean said.

In Karlsson's first game back he played an astonishing 27 minutes and looked fresh when it was over. But as fellow defenceman Marc Methot put it, "27 minutes for Erik is like 20 minutes for most guys."

Karlsson claimed he had determined right from the beginning that he would defy the experts and be back much earlier than anyone else believed he could.

"It was one of my things that kept me going," he said after practice. "If I would have let myself think that I probably wasn't going to play any more this year I would have shut it down and done my re-hab [only] as well as I needed to."

There had been some thought that he might well play that one game but would likely rest the following day and perhaps not play or only play one of Ottawa's two remaining games: home Saturday night against Philadelphia Flyers and in Boston on Sunday to make up for the game that had to be cancelled the day of the marathon bombings.

"No pain or anything," he said Friday. "I woke up this morning and felt like I always do, so I have no concerns."

He would definitely play Saturday, and likely Sunday. "I've been away for quite some time," he said, "and I'm not 100-per-cent comfortable out there in all situations. Hopefully I'll be more comfortable [Saturday] and the game after that."

And then comes the playoffs – opponent still undecided.

One reporter asked him what he knew about Rocket Richard, a question that caused the young Swede to stare back in bewilderment. You mean the trophy?

But a generation before Karlsson was even born the Rocket was not a trophy but the 36-year-old captain of the Montreal Canadiens many believed would never recover from a similar slice of the Achilles tendon.

Richard managed to appear in only 28 games in the 1957-58 season – Karlsson's 17 games, if he plays both weekend matches, would amount to virtually the same – but the Rocket had a sensational playoffs, scoring 11 goals as he led his team to the Stanley Cup.

Karlsson smiled as he listened. 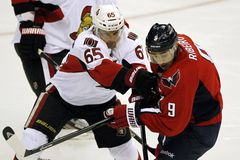 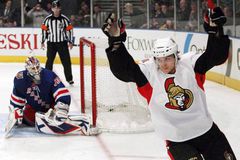 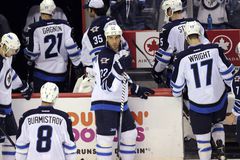 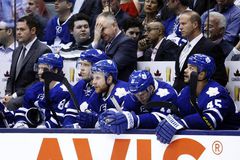