Evander Kane seems a lot older he actually is.

The 24-year-old is already an NHL veteran, currently playing in his seventh season after entering the league as a teenager with the Atlanta Thrashers, two seasons before they moved to Winnipeg.

Now in his first year with the Buffalo Sabres, Kane is trying to rediscover the magic that defined his younger years, particularly the 30-goal campaign of his third NHL season.

Amid much controversy, Kane was dealt from Winnipeg to Buffalo last February, playing his first games for the Sabres this fall. He's beginning to hit his mark for the club, nearing the 20-goal plateau for the first time since that 2011-12 season when he scored 30 for the Jets.

Kane scored his 19th goal of the year Monday night in Toronto, the game-tying marker in a 4-3 Sabres' shootout win. It was also his 17th goal in the past 42 games and 11th goal in the last 25 — a stretch he describes as his best this season.

Kane, who missed the final 30 games last year due to a shoulder injury, believes he should be an annual threat for 30 goals or perhaps more. He boasted of burying "40 or 50" in the fall.

"I've had some injuries over the course of the last couple seasons, but yeah that's definitely a mark that I think I should be very much capable of hitting every year being healthy," Kane said.

Bylsma said Kane is proficient at driving wide with his imposing six-foot-two frame and getting his shot off, but he can do more to punish opponents in tight.

"I think for Evander to reach the 30-goal mark, we've talked about probably getting six to nine goals on the inside," Bylsma said.

Bylsma wants Kane to find open areas in the middle of the ice and set himself up for prime scoring opportunities. Playing with Jack Eichel, the second overall pick at the draft last June, should help with that.

Production on the power-play would help his prospects, too.

Nearly all of Kane's 128 NHL goals have come at even-strength. He's scored only two power-play goals this season and has only 19 for his career.

The former fourth-overall pick had one great chance to add to that total against the Maple Leafs, but fired high from a spot on right faceoff circle.

Teammates don't doubt his potential, nor obviously do the Sabres who gave up two players, two prospects and a first round pick to land Kane as well as defenceman Zach Bogosian from the Jets last season.

"Whether he's scoring 20, 30, 40 or 50 goals he wants to score as much as possible obviously, everyone does," said Bogosian, picked third overall a year before Kane. "But he has the inner drive that he works hard and tries to win every night.

"I think a lot of people look at him and say a lot of things about him, but at the end of the day he wants to win and he wants to work hard and he does those things."

Those things that people say about Kane relate to off-ice troubles. He was suspended one game most recently for missing practice. Kane overslept after attending the NBA all-star game in Toronto, apologizing a day later.

Bogosian said Kane has had to grow up in the spotlight.

"In the world we live in now everything's so scrutinized," Bogosian said. "We're under a microscope a little bit with social media and everything. You roll with the punches a little bit. He's got the attitude where he will always work hard and try to score goals and help the hockey team."

Kane says the microscope first centred on him in junior when he played with the Vancouver Giants, his hometown club.

He describes his first season with the Sabres as "up and down" year both for himself individually and for the team, which sits bear the bottom of the Eastern Conference. He can be a key piece to the Sabres' revival if he stays healthy and remains clear of off-ice distractions.

Four years have passed since he hit his high-point in the NHL. Still a young man, Kane is trying to get back there.

"It's gone by quick," he said, "and hopefully there's a lot of years left." 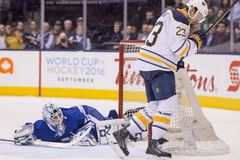 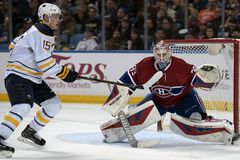 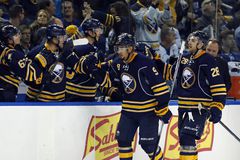