The Hall of Fame plaque is off to the engravers. The application is ready to go to the Guinness World Records.

Sunday at 2 p.m. at the University of Ottawa's sports complex, a puck will drop between two players standing at centre ice: Larry McNabb and Doug Palmer.

It will be but one of hundreds, perhaps thousands of minor- and beer-league hockey games played in Canada this weekend, but this one will be profoundly different.

This will be the one that proves the dream never dies.

Well, not completely. Special dispensation is granted to goaltenders: Mr. McNabb's team's goalie clocks in at an underage 79.

All others, however, are into their ninth decade, still playing the game that first captured their imaginations well before Hockey Night in Canada even existed. Mr. McNabb's first bubble-gum hockey card was of Howie Morenz, superstar of the 1930s Montreal Canadiens. Today, the Cape Breton native, like the other over-80s, has his own card. It's professionally produced, with an action photo on the front and statistics – year born, life teams, marriage, children, grandchildren – on the back.

"That would be nice," the air force veteran says.

Mr. McNabb also plays with the Elder Skatesmen team each Monday and Thursday at the university complex. The members are all over 70 and range from those who took up the game in their 50s to a few who played junior and even semi-professional hockey.

Organizer Maurice Marchand, 75, of Gatineau (his friends call him Moe), came up with the idea for the 80-plus "tournament." Mr. Marchand noted the large number of players well past retirement age still playing, and he and two colleagues began gathering information from the area. They found that the Ottawa-Gatineau area alone had about 750 players over 65 playing in 27 different organizations.

At a regular-season game held this week by the Elder Skatesmen, the defence duo of Bobby Vezina and Paul McTaggart had 161 years years between them, 82 and 79 respectively – Mr. McTaggart will be eligible for "rookie" status next year when he turns 80.

"No one likes anything with a zero in it," he says. "But you can't stop time."

"Getting dressed is the worst part," Mr. Vezina laughs. "Just carrying my equipment from the car is getting tough."

Despite Mr. McTaggart's point, many of the players actually look forward to reaching 80, when Mr. Marchand will see that their names are inscribed on the plaque that sits on a lobby wall – an area they call their own hall of fame.

Mr. Vezina and Mr. McTaggart are spelled off by defenceman Herb Brennen, 71. "I'm the kid," Mr. Brennen jokes. He and Leo Lapierre, another Elder Skatesman, went to hockey school the past two summers just to improve their skills.

"We need some young ones to keep us active," Mr. Vezina says. "Otherwise, we wouldn't move."

There is, admittedly, not a great deal of movement in an Elder Skatesman's game. In an odd and charming way, they resemble at first glance a bunch of tall novices just learning the game. A few carry wooden sticks and one still wears tube skates. Most move cautiously; some have trouble turning, stopping or handling the puck.

A few still periodically flash old hockey skills. McTaggart, who practises law in Ottawa, has played the game since he was 6 and lived in Toronto. A neighbour was Lionel (Big Train) Conacher, who is in the Canadian football, lacrosse and hockey halls of fame. Mr. McTaggart and Lionel Jr. grew up playing several sports together.

"I've never been a good skater," Mr. McTaggart says. "I was never as good with things below the waist as above the waist – except, of course, with sex."

The dressing-room banter, Mr. Vezina says, becomes more important to them than the actual playing. They go to "the 19th hole" for draft beer after most games and the berating is merciless, especially against the five lawyers in the group.

"The hour before the game and the hour after," Mr. Vezina says with a laugh. "It's just like Saturday Night Live in here. Old guys telling lies."

There are, not surprisingly, distinctive rules in such games. If two players get into a scrap or an argument – "Hey," says Mike Etherington, 66, "it's hockey!" – next game the combatants are put on the same line to ensure they get along. If a player goes down, a shout of "Hold it!" goes up and the game stops until the player is back on his skates.

Another group, the Ottawa Geriatrics, has a division in which all players have gone through major surgery, usually knee or hip replacement. The wife of one player sits in the stands with a whistle, ready to blow it at the first sign of a player in trouble.

The players joke about the inevitable – when the game will be over absolutely. "Once you're past 40, you're on a glide into the toilet," Mr. McTaggart says philosophically. "I'm on the glide path."

When one of their more popular players, Ottawa lawyer Jim O'Grady, died of a stroke at 72 in 2008, the teammates who served as pallbearers wore various O'Grady jerseys from over the years.

They also printed up additional hockey cards and handed out 750 of them at the funeral. Now, it's on its way to becoming a tradition whenever one of them answers the final horn.

Mr. McNabb has done a great deal of thinking about how he will feel on Sunday afternoon as, with mayors and mounties standing by, the puck will drop on this historic game. A defenceman all his adult life, he has not taken a faceoff in, he calculates, 71 years.

"They were such a great gang to play with."

The story of the Summit Series, as it's never been told before
September 15, 2012 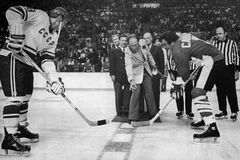 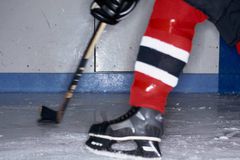 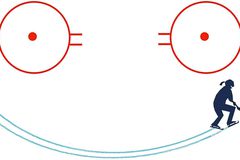 Facts & Arguments
Why I'm happy to finally be a hockey widow again
January 17, 2013 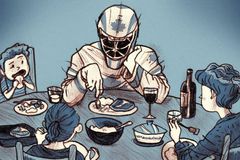 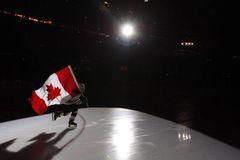