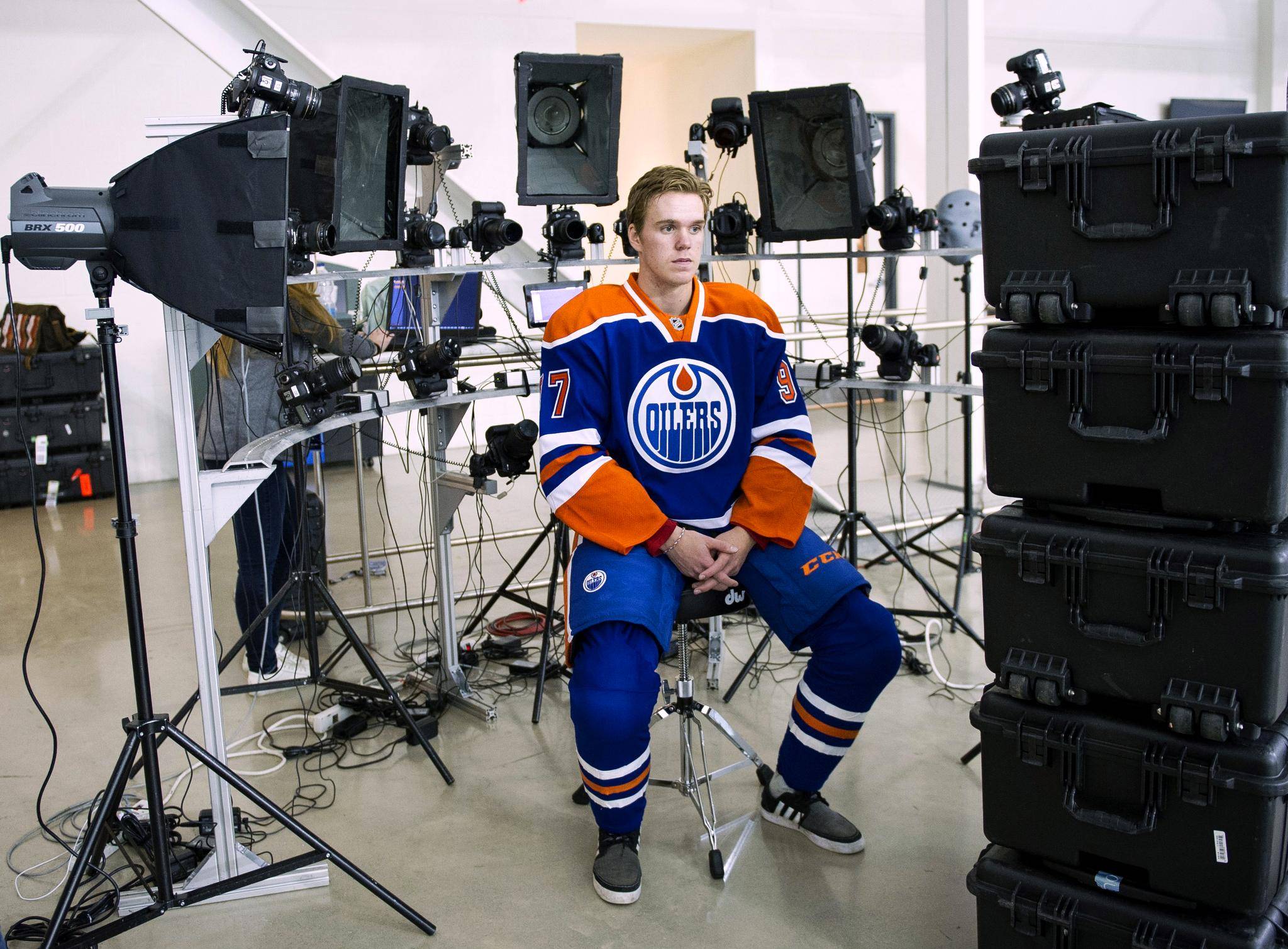 In the old Maple Leaf Gardens, Connor McDavid charges across the ice, flips a puck toward a net that isn’t there, scores an imaginary goal and pumps his fist. A photographer captures the moment he has long daydreamed about.

In less than two weeks, hockey’s next big thing will report to his first NHL training camp. In a little more than a month, the 18-year-old will play his first game. In November, his first rookie card, shot Tuesday in Toronto, will hit the market. 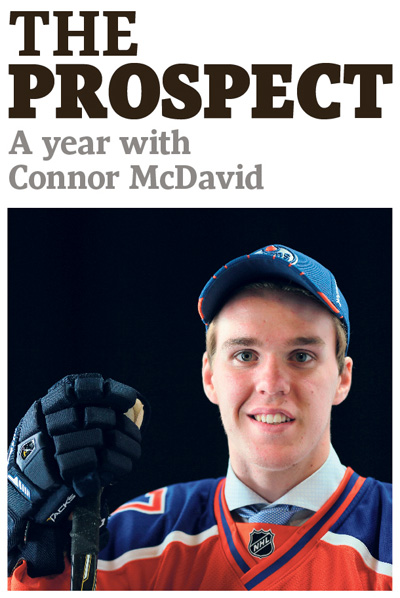 Marty Klinkenberg spends the season with teenage Canadian hockey sensation Connor McDavid, and tracks his impact on the Oilers, the NHL, and the city of Edmonton. Highlights from the series:

It will be highly coveted, and the card company promises it will be a challenge to find. There hasn’t been a player of such magnitude to enter the game in at least 10 years.

“We have been planning on this since Connor was 14,” says Chris Carlin, senior marketing manager for California-based Upper Deck, the NHL’s lone licensed trading-card partner. “This type of player comes around very seldom.”

There is speculation Mr. McDavid’s rookie card will be worth $250 to $300 straight out of the pack. Mr. Carlin says the buzz is beyond anything the company experienced with Sidney Crosby.

“Connor is not just attracting interest from hockey, he is attracting sports fans, investors, gamblers and speculators,” Mr. Carlin says. “We have card dealers telling us that people are calling and saying they want to buy a case this year instead of a box. Everyone wants a piece of Connor.”

On Tuesday, Mr. McDavid and 38 other rookies gathered at the old Gardens, now Mattamy Athletic Centre, for a daylong hockey-card photo shoot co-ordinated by Upper Deck and the NHL Players’ Association.

Cards cannot be released until a player has skated in his first league game, so Upper Deck uses the day to get a head start. It’s an emotional moment for the rookies, a landmark day for the company, and an important day for the NHL. 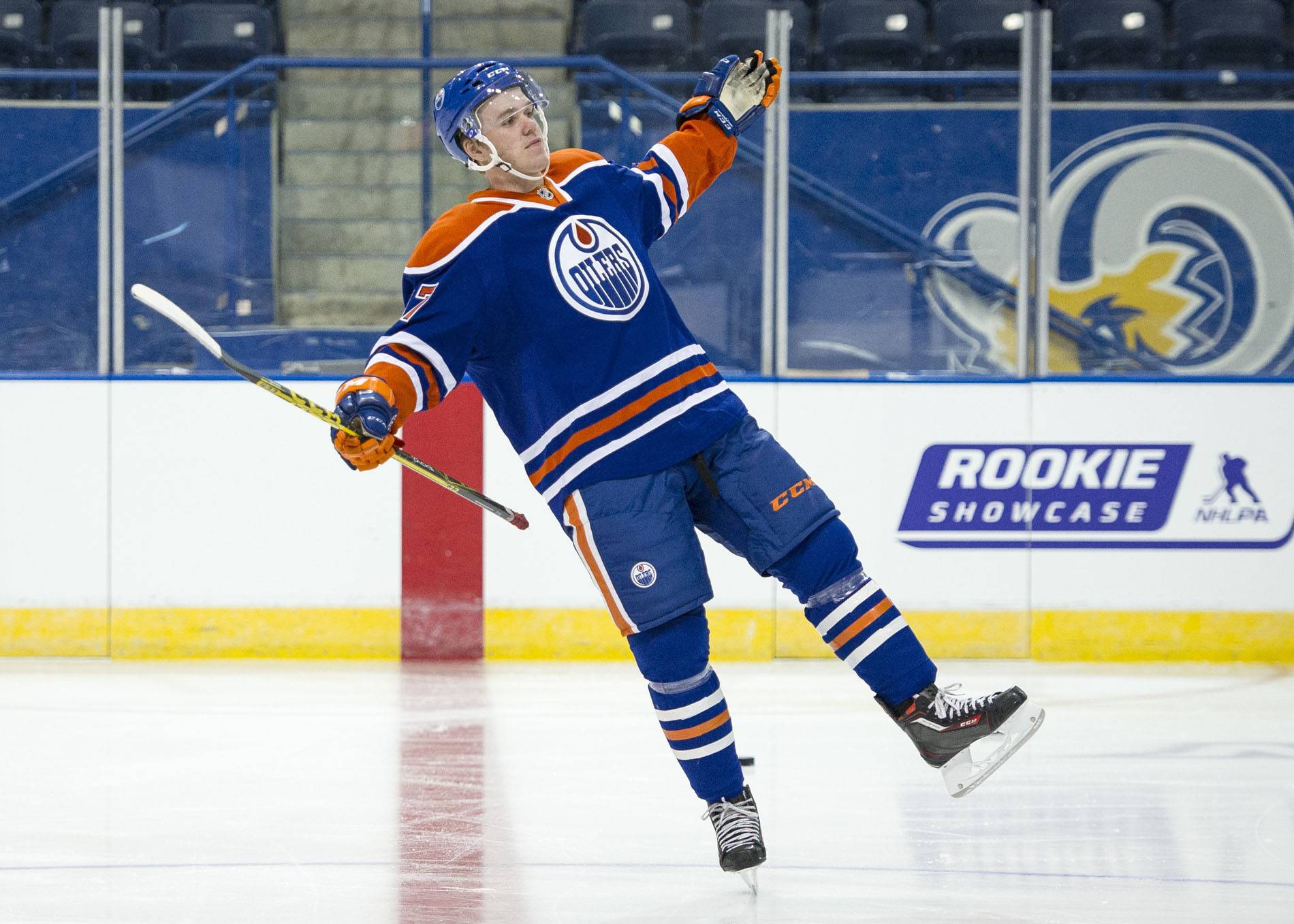 “It is special to be out here,” says Mr. McDavid, chosen by the Edmonton Oilers with the first pick in the June draft. “Being on your first NHL hockey card is very exciting, like getting drafted and playing in your first game. Everyone talks about their rookie card. I can’t wait to see mine.”

Over the day, players are directed through eight stations. At one, they autograph pucks and pennants; at another, against a canvas backdrop, they play-act hockey; at one more, three-dimensional cameras capture images for the EA Sports video game.

They begin the morning slapping pucks against the boards at centre ice and hamming it up while miming goal celebrations. They rag one another mercilessly, and crowd around Upper Deck photographer John Ibriks to look at each frame he shoots.

Once, Dylan Larkin, the Red Wings’ No. 1 pick in 2014, sneaks into the background to ruin a picture of Mr. McDavid while he poses at centre ice. Seconds later, Samuel Morin, a 6-foot-7 defenceman chosen by the Flyers in the first round in 2013, flops on his belly and slides quietly past. 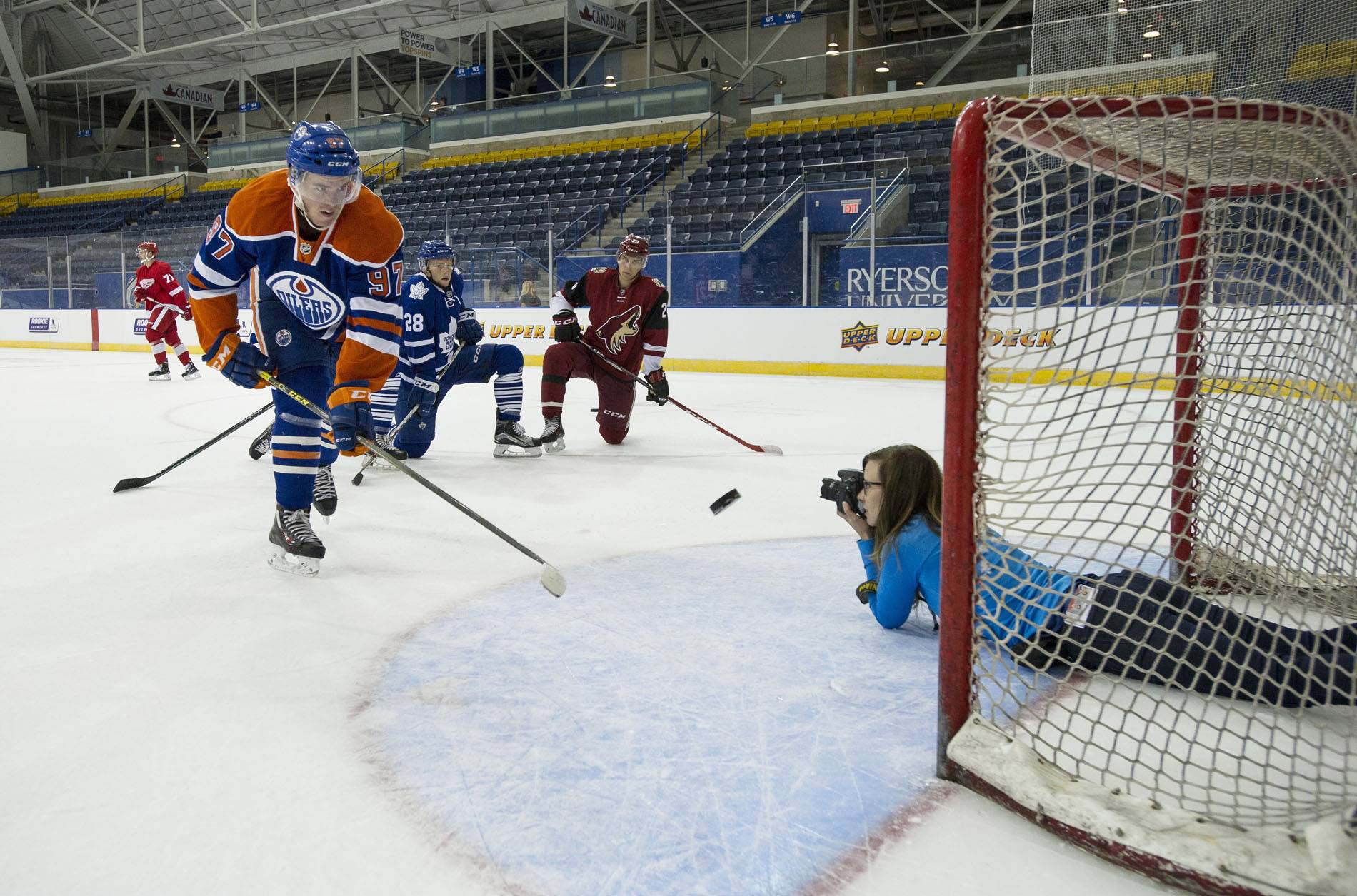 McDavid backhands the puck for a photographer at the NHLPA rookie showcase in Toronto on Sept. 1, 2015. (Kevin Van Paassen for The Globe and Mail)

At one other station, players practice stick handling and then flip pucks over the head of Andrea Cardin as she lies on her stomach only inches away.

“It was fun,” says Ms. Cardin, a photographer for the Ottawa Senators. “I came out of it in one piece. No black eyes or anything.”

Linemates in Erie, Mr. McDavid and Mr. Strome also engage in a frantic game of bubble hockey. When he wins, Mr. Strome whoops and does a little dance. Mr. McDavid groans, and begins pulling on his gear to have his final set of pictures taken for the day.

Mr. Carlin says Upper Deck released too many Crosby cards in his rookie season, and has learned from that mistake. The fewer cards available, the more they are worth to collectors.

“If you produce so many that the content is watered down, then the cards aren’t perceived as a collectible any more,” he says. “We understand now that it is not such a bad thing if people can’t find one. It helps create a buzz.” 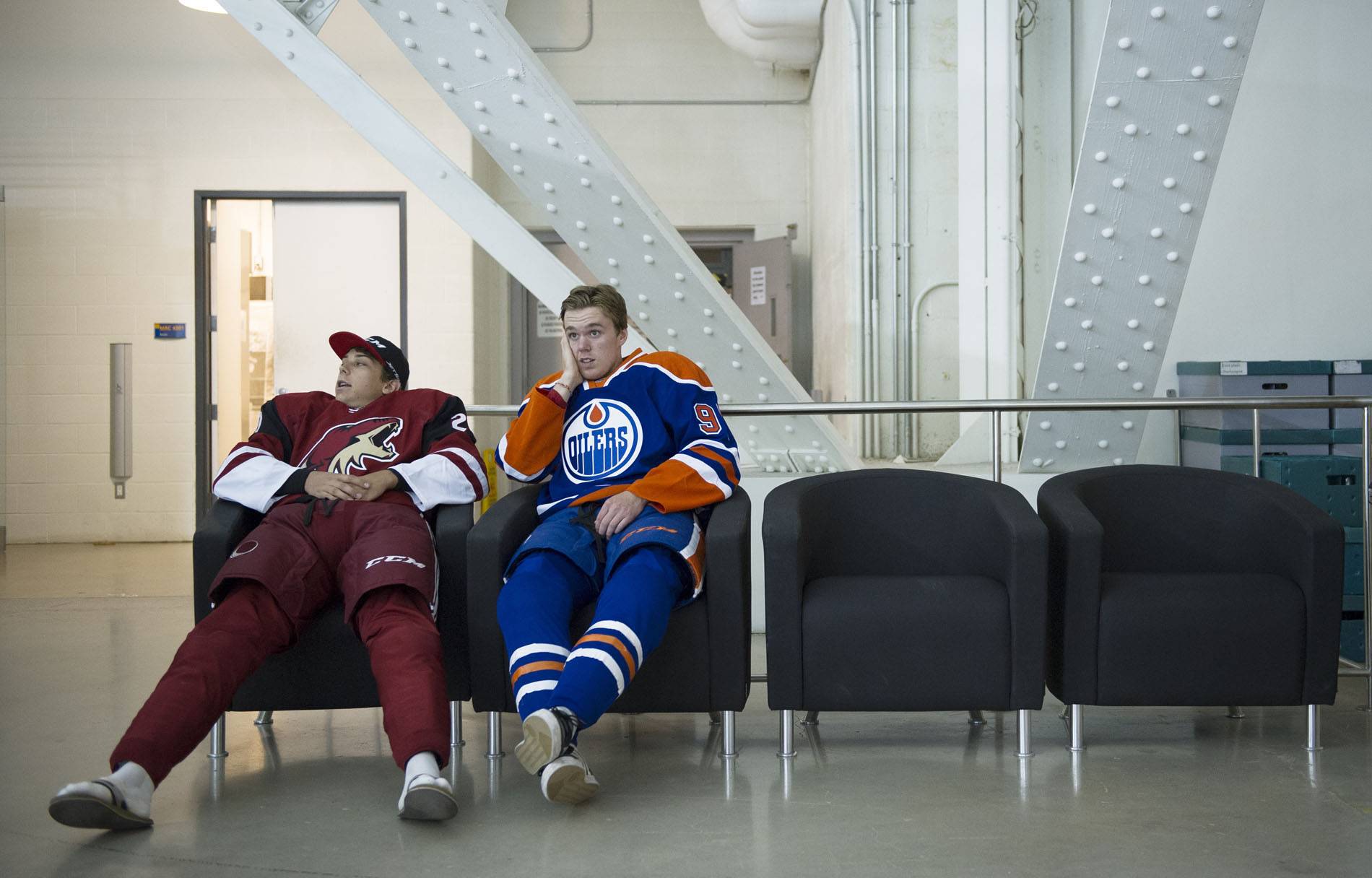 Arizona Coyotes rookie Dylan Strome relaxes with McDavid during a break in activity. (Kevin Van Paassen for The Globe and Mail)

To help meet the market’s demands, Upper Deck plans to release a variety of special sets of promotional cards. One that will be rolled out in November will feature six cards each of Mr. McDavid and Wayne Gretzky, the former Edmonton superstar with whom he has already been compared. A second offering featuring the Great One and Mr. McDavid will be brought to market in May.

“This is kind of a piece of history,” Mr. Carlin says. “People don’t want to miss out.”

There has long been a romance around card collecting, especially to previous generations of kids; now collecting is an increasingly big business and money is as prevalent as emotion.

To date, the highest amount ever paid for a trading card is $2.8-million, in 2007 for a 1909 Honus Wagner baseball card that was once owned by Mr. Gretzky and Los Angeles Kings owner Bruce McNall. Only 50 to 100 of the old American Tobacco Company cards were ever distributed.

What will happen with Mr. McDavid’s cards is anyone’s guess – but the smart money seems to indicate they most likely will grow in value.

“From a collector’s perspective, we are seeing interest from people who haven’t collected in years,” says Adam Larry, the director of licensing and associate counsel for the NHLPA. “We are hoping the release of Connor’s rookie card will draw them back in, and get them collecting again. I think the table is set.” 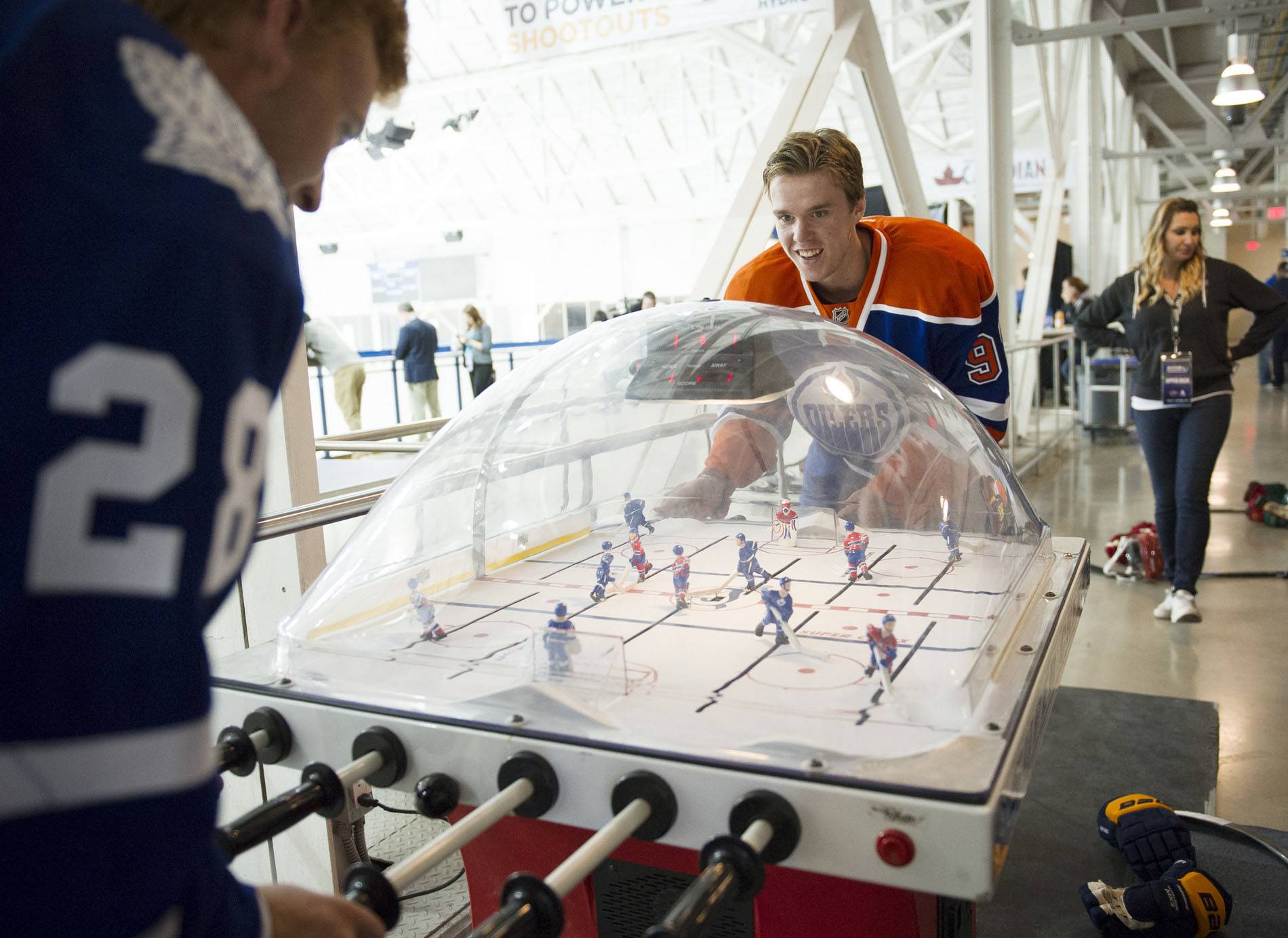 McDavid faces off against Connor Brown of the Toronto Maple Leafs in a game of bubble hockey. (Kevin Van Paassen for The Globe and Mail)