The mob of reporters gathered for the NHL entry draft is in danger of sensory overload given the wave of news on several fronts from compliance buyouts to big-name trades to the old standby, teams in financial trouble.

On the latter front, the fate of the Phoenix Coyotes is down to the lobbying now. George Gosbee and Anthony LeBlanc, the Canadian businessmen fronting the company now called IceArizona that wants to buy the Coyotes, will need to find four votes on the seven-member city council of suburban Glendale to win approval of the arena-management deal they offered the city. That deal, which will pay IceArizona $15-million (all currency U.S.) per year with $6.72-million in arena and Coyotes revenue coming back to the city, is outlined here along with the risks to Glendale. There is also a memo to council from acting city manager Dick Bowers that expresses much concern about the risks .

The risk is quite simple. The Coyotes have never sold enough tickets at high enough prices to put them above the bottom two or three of the NHL's 30 teams in revenue. But most of the revenue IceArizona wants to share with the city is based on ticket surcharges and the introduction of paid parking, which will add at least $11.50 to the cost of attending a Coyotes game for most fans. No wonder the prospective Coyotes owners don't want to guarantee much of that revenue.

But LeBlanc and Gosbee will be lobbying hard this weekend, starting with Friday's public council meeting, which was called to discuss the deal. No official vote has been called for Tuesday's regular council meeting, but three councillors have asked for one. So have LeBlanc, Gosbee and NHL commissioner Gary Bettman, who said Thursday the Coyotes will move if the deal is not approved by Tuesday.

There is an interesting name in the mix with Gosbee and LeBlanc. Former NHL goaltender Mike Vernon is a Calgary native and a close friend of Gosbee, who is a Calgary financier. Vernon said he is not an investor at this point but is helping out with advice and may take a role in the Coyotes' hockey and business operations if the arena lease is approved. "We'll see," he said.

If IceArizona gets the team, Gosbee and LeBlanc want to recruit more investors among the large group of Albertans who winter in the Phoenix area. Vernon, who is an affable fellow, would be a big help in that regard.

Elsewhere on the NHL business front, Bettman and NHL deputy commissioner Bill Daly are trying to play down reports New Jersey Devils owner Jeff Vanderbeek is in trouble with his bankers again. The New York Post reported recently that Vanderbeek missed the first payment in April on the $170-million in loans he refinanced last December with much help from Bettman, who was said to have done his usual "persuasion" with the bankers.

Bettman said again on Thursday the Devils are not in financial trouble but banking and hockey people insist otherwise. It is the same story since Vanderbeek handed over more than $60-million to the City of Newark to help build the Prudential Centre: Too much debt and not enough revenue, as the Devils were hammered this season by the double whammy of the lockout and missing the playoffs.

The total debt on the franchise is not known but some sources put it well above $200-milllion. The Devils also owe a lot of money to the NHL, which has been helping the team out. One report said the NHL debt is $15-million but those with knowledge of the situation say it is much higher.

Vanderbeek has been searching for investors for a long time without success. The debt is the problem. Someone who has seen the team's books says the team's revenue is not among the NHL's best but there is enough to make it work if the debt could somehow vanish.

The money troubles are showing in the Devils' operations. They have a long list of pending unrestricted and restricted free agents, including David Clarkson, Patrick Elias, Adam Henrique, Dainius Zubrus and Marek Zidlicky. The only one close to being signed is Zubrus, who has apparently agreed to a three-year contract at $3.1-million per year.

But Devils general manager Lou Lamoriello told the Bergen Record the deal isn't signed, so he does not consider it finished business yet.

Bettman says the future of the Coyotes is up to Glendale
June 27, 2013 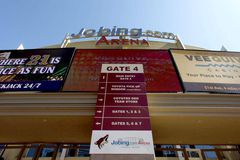