Among the more colorful words spoken by Toronto Maple Leafs interim coach Peter Horachek this season was a frank assessment of Phil Kessel's play last month and his view that it didn't register high enough on the give-a-darn meter. OK, give-a-darn is a slight paraphrase needed to pass muster in this family newspaper, but his essential point about effort and try was salient.

The Leafs paid a visit to Calgary on Friday night, and it was clear from the get-go which team had something at stake, and which was playing out the string.

The Flames, in a fight for their playoff lives, came out with a high-energy effort against a listless Leafs' team and received a first-class effort from their top line of Sean Monahan, Jiri Hudler and Johnny Gaudreau. Playing much of the night against Kessel, Tyler Bozak and Joffrey Lupul, they completely outclassed their opposite numbers.

Each of the three managed three points apiece as the Flames opened up a 4-1 first-period lead, led 6-2 before the halfway point of the game and ended up coasting to a 6-3 victory at the Scotiabank Saddledome.

The win moved the Flames into second place in the Pacific Division, one point ahead of the Vancouver Canucks, who'll get a chance to kick the Leafs when they're down Saturday night on Hockey Night in Canada. There was no mercy hook for Leafs goaltender James Reimer, who went the distance in goal, with Jonathan Bernier scheduled to play against the Canucks.

"They're in a real hunt for a playoff spot here and desperate for points," said Reimer, of the Flames, "and they just came out with a lot of intensity.

"As long as you're in there, you keep fighting, you keep battling and you never give up. That's the mentality I had and you just try to grind it out."

The Leafs will welcome Nazem Kadri back in the line-up for that game, now that his three-game suspension (for arriving late to a team meeting last Sunday) is over.

Kadri watched from afar as the rest of his teammates showed up late for an actual game, not a meeting, though it was unclear what penalty management could exact for that offence. Calgary was up two goals early, and the Leafs had one chance to get back in it, after Richard Panik's power-play goal narrowed the gap to one and Lance Bouma received a major for kneeing the Leafs' Brandon Kozun.

Instead, the Leafs gave up two (two!) shorthanded goals on the five-minute manpower advantage, failed to score any of their own, and were effectively out of it by the end of 20 minutes. Mikael Backlund scored the back-breaker, on a shorthanded breakaway, and before the penalty to Bouma expired, Monahan added another, his first of two goals on the night.

"Obviously, being down for five minutes, you don't expect to score two goals," said Backlund. "That was huge for us, coming out of that PK, with two goals scored."

Horachek called it "an awful start" and said the Flames "outworked us the whole period. Everything that happened to us, we did to ourselves. We should not be very proud about that effort."

According to Reimer, the Leafs' discussion between the first and second periods focused on "playing a more honest game and salvaging something. It could have gotten real ugly if we had continued on the path we were going. We just hit the reset button and tried to battle back."

While the Leafs continue to move up in the Connor McDavid sweepstakes after another resounding defeat, Calgary traveled after the game to Denver, where they will play the Colorado Avalanche Saturday, in the second half of the Hockey Night in Canada doubleheader.

Calgary now has points in its last six games (5-0-1), all of them played since losing their captain and best player, Mark Giordano, to season-ending biceps surgery. The Flames are already ahead of their pace from last season, when they managed just 77 regular-season points.

Reimer wasn't sure if the Leafs' compete level was the issue, and he may have been right. Most of the time, it was their execution that failed them. They gave up too many breakaways, and their defensive zone coverage was at times atrocious, all the while also allowing the Flames too many easy entries into their zone.

With Calgary way out in front, the game got sloppy in the second half, but overall, they were happy with the result.

"It's not as easy as it looks always." 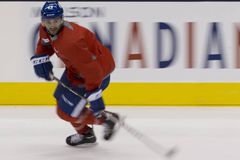 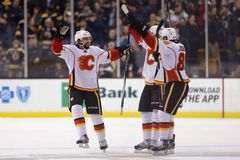 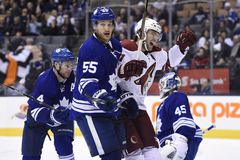 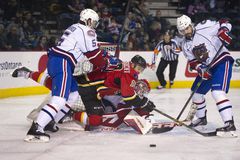