With the playoffs fast approaching, those three teams are neck-and-neck, likely competing for two spots in the Western Conference. Each has experienced adversity, but that's no consolation for the one that ends up on the outside looking in.

"There'll be 16 teams that earn it, and nobody asks after the fact if you didn't have this player, or that guy got hurt or you had this schedule," Flames general manager Brad Treliving said last week in Boca Raton, Fla. "You either earn it or you don't."

Earning it means something entirely different to the Flames, Jets and Kings.

The Flames are trying to overcome losing Norris Trophy-calibre defenceman Mark Giordano to a torn biceps tendon. They've managed to stay afloat at 6-3-2 since, but Treliving insisted his team hasn't accomplished anything yet.

"I do know that our team will continue to battle, and they'll continue to compete and they're going to be in the fight," he said. "You just hope that when it all ends, we're above the line."

The Jets are above the line, although they've bobbed up and down in the past week or so. Winnipeg was riding a four-game winning streak into its game at the Edmonton Oilers on Monday night despite being without No. 1 centre Bryan Little, 18-goal scorer Mathieu Perreault and all-star Dustin Byfuglien.

"It's easy when things are going well to roll right along, but when you get those speed bumps, you're very interested to see how guys react and how groups react," GM Kevin Cheveldayoff said last week. "It is a testament to the group of guys and it's a testament to the coaching staff that when you have adversity, it's when you maybe reveal some things that you don't know about players."

In four straight victories, goaltender Ondrej Pavelec has a 0.98 goals-against average and .966 save percentage. But Cheveldayoff remains ready for the next injury or unexpected problem and wants his players to narrow their focus with the playoffs in sight.

"You have to be ready to just accept anything and as a group not let it faze you because if you do, there's not enough time," he said. "That's what I impart upon all the guys is: Don't get caught up in the day to day aspects of the race or scoreboard-watching and that. Live in the moment because that's really all you can control."

That's easier said than done for the Kings, who need points and help to avoid missing the playoffs the season after winning the Cup. Los Angeles has become adept at this kind of win-or-go-home situation, especially in the post-season, but it's not quite that drastic yet.

"When you're in playoffs it's a little easier to focus on one series at a time and one game at a time that way," defenceman Drew Doughty said Monday at Prudential Center. "Whereas when you're in a season, you're thinking of the big picture, thinking of what other teams are doing and all those kind of things. It's tougher that way."

Perhaps captain Dustin Brown put it the best when talking about the notion of so-called must-win games: "They're not until they are."

Must-win is a stretch, but every game is starting to feel like a playoff game for the Flames, Jets and Kings. The pressure's on for all three teams, but Kings coach Darryl Sutter doesn't mind.

"Pressure is how players learn how to play at another level," Sutter said. "Pressure's not a negative. Pressure is a very positive thing."

Mike Richards back with Kings, who need veteran centre to make a difference
March 23, 2015 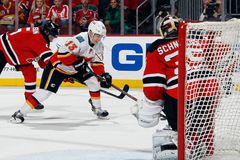 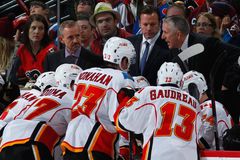