Calgary Flames centre Mikael Backlund waited 10 years to become an overnight sensation, which is often the way in the NHL, where patience may be a virtue but is rarely exercised.

Backlund's latest virtuoso performance in a breakthrough season came Saturday night in Winnipeg, when he scored the game winner and set up the insurance goal in a 3-0 victory over the Jets.

Saturday's victory was the Flames' ninth in a row, the longest win streak since relocating to Calgary 37 years ago.

Lots is going right for the Flames these days, including Brian Elliott's strong play in goal – eight consecutive wins, a 12-1-1 record in his past 14 decisions dating to Jan. 26. However, the one consistent element has been the play of Backlund and his line, Michael Frolik and Matthew Tkachuk.

Nominally listed in most places as the No. 3 unit on the team's depth chart, it has been the team's best trio from start to finish, in no small part because of Backlund's strong, even-keeled play.

On Monday, the Flames play the Pittsburgh Penguins and it is pick-your-poison night for Backlund and his line. They will get a chance to defend either Sidney Crosby or Evgeni Malkin as their primary checking assignment in what is probably the most anticipated game in the Stampede City in the past two years.

Pittsburgh is pushing Washington for top spot in the overall NHL standings and Calgary has a chance to make the playoffs and maybe even earn home-ice advantage for the first round.

If Calgary wins its 10th in a row on Monday, it would match the longest single-season win streak in franchise history, established by the Atlanta Flames from Oct. 14 to Nov. 3, 1978.

Consistency is something that was missing from Backlund's game at the start of his NHL career, according to Flames assistant general manager Craig Conroy, who was a teammate of Backlund's when he first turned pro in 2009 and has watched the full arc of his career.

"Nowadays, you see young guys like Sean Monahan come in and score 30 goals right away and you forget that with some guys, it takes a little longer," Conroy explained. "With Backs, as a young player, he had great stretches – five games, eight games – and then it would be a real roller coaster for him.

"Mentally, at times, he questioned what was going on. He was hard on himself. If he had a bad game, he let that slip into the next three games. Now, he just knows the league better. He's physically stronger. He's just comfortable in knowing what it takes to have success in the NHL. It just took him longer than the majority of the guys.

"Now, what we saw in small glimpses, he's figured out how to do it over 82 games."

Backlund has been the Flames' leading scorer for most of the season, ahead of more established snipers such as Johnny Gaudreau and Monahan. Chosen by the Flames in the first round of the 2007 entry draft, 24th overall, Backlund's NHL career was teetering in the balance as recently as the lockout-shortened 2012-13 season. After a promising rookie season, Backlund struggled with injuries in his second year, which he labelled a "disaster.

"When the lockout came, it really helped me out because after that tough year, when I was really struggling at the end, I got the excitement back, going back to Sweden and playing and getting my confidence back," Backlund said. "Coming back for the short season, I knew I had to play well. The contract I signed that year was for one year, and it seemed like kind of a last chance for me. Since then, every year it's been pushing forward a bit. There have been a few ups and downs and a couple more injuries, but I think last year and this year, my game's gone to another level."

Backlund's emergence as a genuine Selke Trophy candidate (for best defensive forward) is an important lesson in perseverance, individually and organizationally. In the NHL's salary-cap world, there's often too much rush, rush, rush when it comes to development – and when potential is not immediately met, or pretty soon after immediately, sometimes teams give up on players too soon.

Martin Gélinas, a Flames assistant coach, said Backlund's development into one of the top two-way forwards in the NHL has a lot to do with simple maturity.

"He was always a good two-way player, but when he was younger and there was a little bit of push, you didn't get the push-back from him," Gélinas said. "Now, you're getting that push-back. Now, when the game is on the line, he rises up – and that just comes with time and maturity. Right now, he's playing with confidence and, when the game's on the line, he wants to be the guy. That's why he's one of the best right now."

Conroy, who was an accomplished two-way centre in his career and finished second to Michael Peca as the NHL's 2002 Selke Award winner, said the Flames always projected Backlund as a 45- to 55-point scorer, who could play in every situation – even strength, power play, penalty killing, and was someone they could deploy against an opponent's top line.

Conroy believes the chemistry that developed between Backlund and Frolik helped spur both to greater heights. Last year, whichever player rode shotgun on their line – Sam Bennett for a time, Joe Colborne in the second half – prospered by the association. This year, the line became even stronger with Tkachuk there to add additional bite to the unit.

"The one thing about Backs, he's always had the right attitude," Conroy said. "But there were times when the city was hard on him. There were times, when he was young and first came over and he was so sensitive to the criticism. I'd say to him, 'Backs, don't listen. Backs, you gotta toughen up.' But you could tell, he took things hard – because he wants to do well for everybody. He wants to do it for the coaches, for the fans, for his teammates.

"Just the way he's matured over the years, I hope he gets the Selke," Conroy added. "We're Calgary, so it's tough, but he works out, he takes care of himself, and he's a true professional. He and Frolik [have] been an amazing tandem for two years."

Whirlwind success stories both, only a decade in the making. 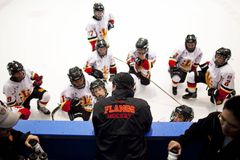 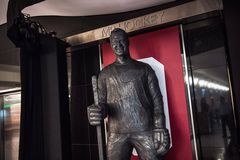