Citing "spectacularly unproductive meetings" with city council, the Calgary Flames said Tuesday they are no longer interested in pursuing a new arena, although team officials are not exactly sure what that means for the future of the NHL franchise.

Ken King, president of the Calgary Sports and Entertainment Corp., which owns the Flames, Stampeders and other sports properties, said ongoing discussions with the city and Mayor Naheed Nenshi regarding a new arena have gotten them nowhere and that the city is not interested in helping build a facility to replace the Scotiabank Saddledome. Calgary is considering whether to bid for the 2026 Olympic Winter Games. The master plan counts on a new arena in the downtown community of Victoria Park.

With NHL commissioner Gary Bettman attending a hastily called news conference at the Saddledome, King told reporters the city's "message is it's not going to work."

The Flames' decision to go public with their frustration came a day after Nenshi released a video outlining his support for a plan that would revitalize the East Village and Victoria Park section of downtown Calgary. In the video, Nenshi tells former Calgary Stampeder Jon Cornish of his wish to see a revitalized Olympic Park, an expanded Arts Commons and a bigger BMO Centre, all of which would benefit from having a new arena built in Victoria Park.

Calgary offered to pay for one-third of the arena, in equal instalments over a number of years, according to a source. The money would have to be paid back. The ownership group, according to this proposal, would cover another third of the total cost and surcharge on tickets would pay for the remaining third, the source said.

The Flames organization rejected the offer, the source said.

The Flames had initially pushed for CalgaryNext, an arena, football stadium and field-house complex that would have been built next to the Bow River in the downtown's West Village. That plan was deemed too intensive – three facilities in too small a space – and too expensive by city council.

That sent the two sides back to the bargaining table where sources say negotiations slowed to a crawl. That angered the Flames to the point where they let it be known that the current ownership might be keen to sell – not with the intent of relocating the franchise but to add new ownership, new blood.

One source described the mood of the current owners as "frustrated" and open to selling their interest in the team.

Bettman said he wasn't surprised by the lack of progress. "I think it was inevitable," he said. Bettman and King then spoke to those attending a dinner for the Flames' annual charity golf tournament. King is also slated to talk about the future of the Flames at the Chamber of Commerce on Sept. 25.

Calgarians vote in a municipal election Oct. 16. Bill Smith, a former president of the now-defunct provincial Progressive Conservative Party, is challenging Nenshi. Andre Chabot, a city councillor, is also in the mayoral race.

Editor’s note: An earlier version of this story incorrectly said Calgarians will vote in a municipal election Oct. 19. In fact, election day is Oct. 16. This version has been corrected.

Opinion
Will Scotiabank get enough bang for its arena buck?
September 3, 2017 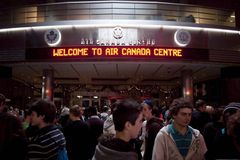 The sign on a stadium matters – and visibility brings cash
May 23, 2017
Naming rights about more than handing over a big cheque
March 10, 2017