Jaromir Jagr asked for a little patience in what he's sure will be his last NHL season, but his first in a Canadian market.

He had yet to meet his new teammates, who were up the highway about to play their season-opener against the Edmonton Oilers.

"I already said in a Czech newspaper it's 99.9 per cent that his will be my last season, so I want to get the experience so I can one day say I played for a Canadian team," Jagr said at a news conference.

The Flames signed Jagr to a one-year contract worth US$1 million.

The six-foot-three, 213-pound forward from Kladno spent the summer not knowing if or where he might play his 24th NHL season.

Calgary's home-opener is Saturday versus the Winnipeg Jets, but without a training camp, Jagr tempered expectations.

"I'm just probably going to need a little more time than usual, but after awhile I can promise you I'll do everything I can to help this team," Jagr said. "I don't know how my body is going to react. I didn't play any games for five months. I didn't have any team practices for five months. I was practising on my own most of the time.

"I just want to get some practices and see how I feel. I still need some confidence. If it's not good for the team to play right away, I'm not."

Jagr started his career Pittsburgh in 1990 when he helped the Penguins win back-to-back Stanley Cups in 1991 and 1992.

Jagr is just 57 games from surpassing Gordie Howe for the most NHL games ever played (1,767).

He pointed out if he hadn't played three KHL seasons in Omsk, Russia, from 2008 to 2011, he would have that record by now.

"If I can reach it, especially with a Calgary Flames jersey on, it's going to be special," Jagr said. "I don't want to look that far."

The number of Flames No. 68 jerseys bought for posterity, and the bump the Flames get in ticket sales from bringing in a first-ballot Hall of Famer, will defray the cost of his modest contract.

"We all do analytics," assistant general manager Craig Conroy said. "He's probably the fifth-best, or seventh-best right-winger in the NHL last year.

"When you watch the game, the reports are this guy can protect pucks, high-end skills still, he can make plays."

The Flames added a Stanley Cup winner to their team on opening day for a second straight year after winger Kris Versteeg was signed a year ago.

"I'm sure right off the bat you're not going to see everything he can do and I know myself I didn't start feeling comfortable until games five, six, seven when you start to get to know everybody on a personal level and it translates onto the ice," Versteeg said.

"I'm sure there will be an integration process for himself. Obviously he's been very good for a long time for a reason playing in different markets."

Ten Flames were not even born in 1991 when Jagr won the first of his Stanley Cups, but he's accustomed to playing with men half his age.

"Everyone compared to my age is a young guy," Jagr said. "Last 20 years I've played with young guys. But the last two years in Florida I played with (Jonathan) Huberdeau and (Aleksander) Barkov and combined their age is still younger than me.

"It was great for me and hopefully they can say the same thing." 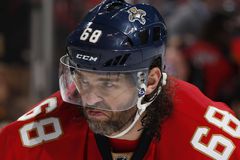