The misery continued for the goal-starved Calgary Flames on Thursday night.

Jaroslav Halak made 33 saves and St. Louis got goals from five different players as the Blues ran their win streak to seven in a row with a 5-0 victory over the slumping Flames, who were shut out for the fifth time in the last seven games.

The two teams last met on Dec. 23. In that game, also played at the Scotiabank Saddledome, the Flames came from behind for a dramatic 4-3 victory.

Calgary's offence has completely dried up since, scoring just five times in seven games — four coming Monday in a 4-3 win in Colorado. In the Flames' last five games at home they've mustered only one goal, on Dec. 31 by rookie Sean Monahan.

"We got outplayed in pretty much every facet of the game tonight," said Flames winger Lee Stempniak, who has no goals in his last 15 games. "I'm a big believer in earning your breaks and earning your luck out there. We haven't been playing well enough to get those chances."

"To score goals, that's the toughest thing to do in the NHL," Hartley said. "I feel for my players because I see them work every day. For many players, it's pretty tough to ask more than what they're giving us right now. They care, I see them basically mentally destroyed after some games but we're proud and we're going to keep fighting."

Stempniak said he's never been a part of a scoring drought like this.

Coming off a 6-0 road loss Tuesday in Phoenix, Calgary got off to a quick start with a 4-1 edge in shots three minutes into the game.

However, Stempniak and Dennis Wideman then took consecutive minor penalties and although the Blues failed to score, they began to apply pressure. With the game's momentum having turned back in their favour, St. Louis took a 1-0 lead when Chris Stewart scored 18 seconds after Wideman's penalty expired.

Vladimir Sobotka scored just over two minutes later and that would turn out to be more than enough offence for Halak, who improved to 18-6-3.

"Especially in the first period, they had a few chances that got me into the game," said Halak, who has three shutouts this season and 28 in his career. "Then we started playing better and we didn't give them pretty much any chances the rest of the first."

Halak was at his best in the second period when the Blues were outshot 15-10 but scored the only goal.

Recently named to the Slovakian Olympic team, Halak hadn't played since getting pulled after the first period on Dec. 28 after getting beaten three times on 13 shots against Chicago. Recently, Halak has been battling illness.

"When you go through the sickness, you're low on energy and you get tired all the time but now, I'm trying to work my way back. I'm not 100 per cent back with my energy yet but I battled through it and it was a big win for us," said Halak.

Ian Cole, Alex Pietrangelo and Vladimir Tarasenko also scored for St. Louis (31-7-5). The Blues pull even in points with Chicago atop the Central Division. The Blues have three games in hand.

"Jaro had to be there in the second period for us. They make it 3-1 or 3-2, she's a different game in the third. He shut the door and good on him," said Blues coach Ken Hitchcock.

"We said right from the start that we were starting a rebuild," Hartley said. "We're hitting major speed bumps right now and overall if we look at the positive side, they're tough lessons but that's going to make us better."

The Flames are 28th in the NHL, three points up on Edmonton and seven ahead of Buffalo.

"We have lots of young players that are in a major school right now. They're in the best hockey league in the world and sometimes, things don't go their way but we keep putting them out there and they battle hard," Hartley said.

"That's the No. 1 criteria. I want to see the compete level of the 20 guys in the lineup in every game. We will not accept mediocre commitment. Obviously, the results aren't what we want to be but at the same time, we will not lower the expectations of this organization at any point."

Perhaps surprisingly, as the game ended, there was minimal booing from the Saddledome crowd, who seemed to show indifference instead. Despite many rows of empty seats in the upper levels, the crowd was announced as a sellout of 19,289.

Mirtle: Maple Leafs in midst of another disastrous collapse
May 11, 2018 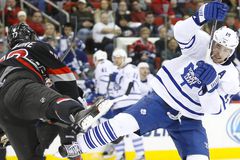