Iginla, the Flames' long-time captain, was traded to the Pittsburgh Penguins late Wednesday night, after multiple reports had him all but signed, sealed and delivered to the Boston Bruins.

In exchange for Iginla, the Flames receive two college players in the Penguins' system – forwards Kenneth Agostino and Ben Hanowski, along with Pittsburgh's 2013 first-round pick.

With Iginla in the fold, the Penguins reunite the two architects of Canada's Golden Goal at the 2010 Winter Olympics, when Iginla passed the puck to Sidney Crosby to score the overtime winner against the United States.

The Penguins look like a powerhouse now. In addition to Iginla, they've also recently added Brenden Morrow from the Dallas Stars and Douglas Murray from the San Jose Sharks. Murray and Iginla have had epic physical battles in the past and presumably both will be happy to be teammates now.

By acquiring Iginla, the Penguins immediately leap to the top of the charts of Stanley Cup contenders for 2013.

General manager Jay Feaster made the trade announcement soon after the team won a 4-3 decision over the Colorado Avalanche at the Scotiabank Saddledome. Feaster confirmed that Iginla had provided the Flames with a list of teams that he would consider joining and noted that his goal, as a GM, was to win a Stanley Cup and not be the executive that traded him away.

But Calgary had sunk close to the bottom of the Western Conference standings and the time to start wheeling and dealing was at hand.

"The final decision was made this evening," said Feaster, who had set up something of a bidding war among the Bruins, Chicago Blackhawks and Los Angeles Kings for Iginla's rights.

"We were talking to the teams the player had put on his list. Once we had offers from teams – and we had multiple offers – we then went about the process of working with the player. The player still has to agree to waive the no-trade, no-move.

"So ultimately it all came together in the game tonight … In this instance, the deal we consummated, this is where the player was prepared to waive for."

Translation: Pittsburgh was Iginla's destination of choice, so he could join Crosby.

Iginla was held out of Wednesday's game against the Colorado Avalanche for precautionary reasons. With a deal imminent, the Flames did not want to risk a possible injury to their long-time captain that could have derailed the deal.

Iginla is 36 and on an expiring contract, so for the moment anyway, he goes into Pittsburgh as a rental. Whether that turns into a longer-term commitment will rely mostly on how the experience goes. For now, his goals are aligned with the Pittsburgh's – Iginla wants to win a Stanley Cup.

Iginla has had just a so-so year thus far, with nine goals and 22 points in 31 games, but the thinking is that the move to a contender will rejuvenate him. Calgary has missed the playoffs for the past three years and Iginla hasn't gone past the opening round since 2004, when the Flames lost in a seven-game Stanley Cup final to the Tampa Bay Lightning.

"Our goal is to retool to the point where we are a competitive team that is challenging and is a legitimate playoff team," said Feaster. "It is the first step of a process. We're going to continue to look for ways to improve our hockey club. Obviously, there are any number of ways to do that – through the draft, through trading, through free agency. We're going to avail ourselves of all of those avenues.

"I don't want to characterize or use the 'rebuild' word."

The Flames' recent woes on the road – 10 losses in a row and counting – plunged them near the bottom of the Western Conference standings and spurred the organization into a rebuild, something they've been loath to do for many years. Without Iginla and with No. 1 goaltender Miikka Kiprusoff on the bench, the Flames won a 4-3 decision over the Colorado Avalanche Wednesday in the battle of the two last-place teams in the West.

With Iginla out now, the Flames would do well to stay near the bottom and enhance their draft position. Calgary hasn't had a top-10 pick since choosing defenceman Dion Phaneuf ninth overall in 2003.

Iginla originally joined the Flames in a 1995 deal with the Dallas Stars for Joe Nieuwendyk.

Agostino is a native of Flanders, New Jersey, and in his junior year at Yale University (ECAC), the No.4 seed at the 2013 NCAA West Regional taking place March 29th. He led the Bulldogs in scoring with 15 goals and 22 assists for 37 points in 33 games this season and was honorable mention for the All-Ivy team. He was originally drafted by the Pittsburgh Penguins in the fifth round (140th overall) in the 2010 NHL Draft.

Iginla will speak about the deal before he leaves to join the Penguins Thursday morning.

"We want to start bringing in more young assets into the organization," said Feaster. "We feel we have some good players coming. They are in various stages of their development now. We like what we've done in the last two or three drafts. There's a gap though." 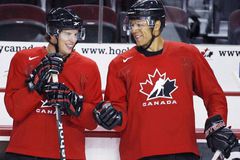 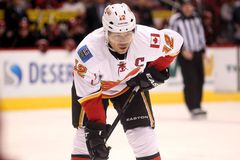 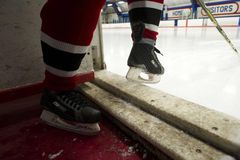 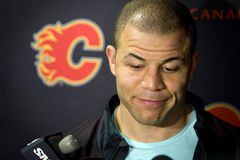