As if the Calgary Flames' season wasn't going down the drain fast enough, now comes a new fork in the road:

In their final home game before the NHL All-Star break, defenceman Dennis Wideman faces the possibility of a lengthy suspension after he ran over linesman Don Henderson in the second period of a game Calgary ultimately lost 2-1 Wednesday to the Nashville Predators.

The incident began after Wideman had his head rattled into the boards by a big check from the Predators' forward Miikka Salamaki.

Dazed and looking a little confused, Wideman got up, straightened his helmet, shook his head, and skated in the direction of the Flames' bench. But just before he got there, Wideman looked up and seeing Henderson in his path, raised his stick and crosschecked the official across his back.

Henderson went down in a heap, probably unaware of what had happened, or who had run him down from behind. No one else seemed to know either since Wideman stayed in the game, with no penalty called on the play.

Ultimately, the NHL will have to determine if Wideman's actions meet the criteria for abuse of officials which is covered under Rule 40 and could see him banned for up to 20 games, if it is deemed to be a Category 1 offence. According to league rules, any player who deliberately strikes an official and causes injury or who deliberately applies physical force in any manner against an official with intent to injure, or who in any manner attempts to injure an official shall be automatically suspended for not less than twenty (20) games.

There are also provisions for lesser penalties – a 10-game suspension, for example, could be applied if the league deems a player applied physical force to an official without intent to injure.

A lot will depend upon how well Wideman convinces the league of what he was thinking when he ran over Henderson.

After the game, Wideman went to great lengths to explain that what he did wasn't intentional, and that he'd apologized to Henderson immediately.

Later Wideman's coach, Bob Hartley, backed him up, comparing the events to a "bad accident."

According to Wideman, the hit from the Predators' player Salamaki left him with "some pretty good pain in my shoulder and neck. I was just trying to get off the ice. I was kind of keeled over. At the last second, I looked up and saw (Henderson). I couldn't avoid it. I went up to Donnie and apologized to him on the ice. I didn't see him. I didn't know where to go – or how to get out of the way."

Wideman went on to say: "Throughout my career, I've been around for a few years and I've treated every official with the utmost respect. I would never intentionally try to hit a linesman or a ref. It was completely unintentional and I already apologized to him."

Wideman said he didn't feel as if he were concussed on the play, though he looked groggy heading to the bench.

"I was trying to go to the boards and then he (Henderson) moved to the boards a little bit and I was kind of stuck in the trolley tracks. It was an accident and I feel really bad about it."

Wideman said he would be "surprised" if he faced supplementary discipline on the play.

"I would never try to hurt a linesman or a ref," said Wideman. "If that (an investigation) happens, all I can do is tell them my side and hope for the best." 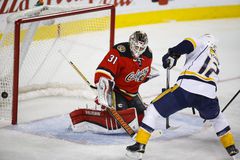 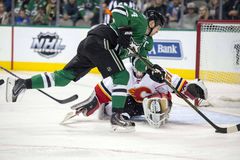 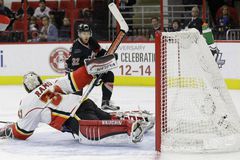 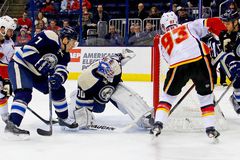 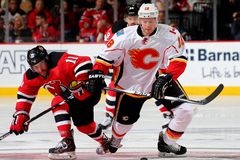