Marc-Andre Fleury wasn't sorely tested, but he stepped up when the Pittsburgh Penguins needed him most on Wednesday night.

Fleury made 22 saves to record his seventh shutout of the season as Pittsburgh started off a Western Canadian trip with a 2-0 victory over the Edmonton Oilers.

"It feels like it's been a while since I got one," Fleury said. "It was a little quiet for me the first two periods, but the third was a bit more one-sided for them. It was nice to finish on a good note."

Penguins head coach Mike Johnston said the ending could have been different if his goalie wasn't on his toes in the third.

"Edmonton had four or five Grade-A scoring chances in the third period," he said. "He did what you need your goalie to do. It was one of those games where he didn't get much action in the first two periods, but he was really called upon in the third period.

"His seventh shutout of the year, that's great to see."

Johnson said it was great to have Malkin back in the lineup after a five-game absence with a lower body injury.

"He generates a lot," Johnson said. "Not only his scoring chances, but with his ability to set guys up and create space for players. I think that line generated more than anybody."

"We didn't have a great game tonight," said Oilers forward Matt Hendricks. "We weren't an aggressive team. Our forecheck wasn't good. Our dumps weren't good. They were exiting their zone way too freely.

"I give them credit, they're a good hockey team, but we helped them out tonight."

Added Edmonton defenceman Jeff Petry: "We had a better third period, but you need to play a full 60 minutes."

There were few chances in the first period as Oilers starter Viktor Fasth and Pittsburgh's Fleury kept the game a scoreless draw.

That changed 24 seconds into the second, as Malkin picked up a loose puck during a scramble in front of the Oilers net and slipped in his 20th goal of the season.

Edmonton had its best chance to that point with five minutes left in the second when a Petry point blast clanged off the post.

Pittsburgh took a 2-0 lead with just 0.4 seconds remaining in the middle period as the rebound off a Kris Letang shot hit former Oiler Perron on his way towards the net and caromed in. It was Perron's seventh goal in 13 games since his trade to the Penguins.

"It was a greasy one," Perron said. "I was going to the net and it hit my leg. I didn't mean to score, it just kind of hit me. I'll take it, though.

"This month is going to be huge for us. We have to have a good start to it."

Letang's assist was his eighth on Pittsburgh's last nine goals.

Edmonton outshot the Penguins 10-2 in the third period, but was unable to get on the scoreboard.

The Penguins play the second game of a three-game trip in Calgary on Friday. The Oilers embark on a six-game trip, beginning in Toronto on Saturday.

Notes: It was the first of two meetings between the teams this season. Edmonton and Pittsburgh spilt their series last year Forwards Taylor Hall and Benoit Pouliot missed the game for Edmonton with leg injuries.

Klinkhammer scores in 13th round of shootout to give Oilers win over Sharks
February 3, 2015 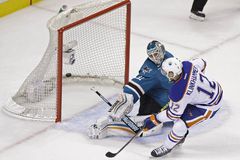 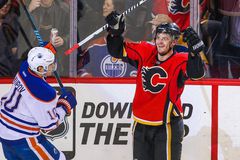 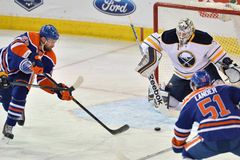 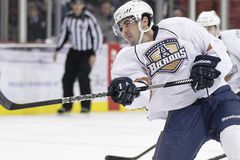 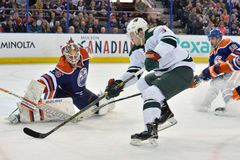