No one gets under the skin of the Pittsburgh Penguins like the Philadelphia Flyers.

"I think honestly we take them out of their game," Flyers winger Wayne Simmonds said several months ago. "I think they hate us so much that everyone's blood is just boiling the whole game."

Simmonds is injured and won't play in Wednesday's game, but the rest of the Flyers will try to continue to get in the Penguins' heads. They're artists at it the way captain Sidney Crosby is at piling up points, and to keep the latter from scoring at will, other opponents have begun following the Flyers' lead.

"Obviously when you play against one of the best players in the world, you want to try and do something to stop him," Philadelphia captain Claude Giroux said Tuesday. "Whatever it takes to get under his skin, I think we're going to try to do."

Of Crosby's 75 career points against the Flyers, second-most of any opponent to the New York Islanders, just nine have come since the 2012 playoffs. In that series, which Philadelphia won in six, Crosby knocked Jake Voracek's glove off in frustration and said: "I don't like any guy on their team."

As the Penguins prepare for another trip to the playoffs, their final meeting of the regular season against the Flyers could serve as a small taste of what they'll have to deal with in a few weeks. Their archrivals are eliminated from playoff contention but still relish the mental and verbal game that comes with playing the Penguins.

"It's always fun in their rink, especially when they're in their rink because they really don't want to lose in their rink against us so they're doing everything it takes not to lose against us," Flyers agitator Zac Rinaldo said. "So we kind of rise to the occasion."

The Flyers are 12-2-1 at Consol Energy Center since the building opened in 2010, including two victories during that 2012 playoff series that seems to set a blueprint for how to annoy the Penguins. Rinaldo said playing with a special edge against Pittsburgh started that spring.

And while Voracek, who's three points back of Crosby for the NHL scoring lead, said everyone makes too big a deal out of incidents from that series, the Flyers have handled the tension of these rivalry games better than the Penguins.

Simmonds even went so far as to say it's weird that the Flyers are usually the more composed team when playing Pittsburgh.

"I think we do it a lot more than they do during the season, and we've been doing it longer than they have because everyone targets the Flyers and stuff like that," Rinaldo said. "So when we go to a team that's equally kind of hated like we are, we kind of overcome that. We're more experienced, I think."

The Penguins should be gaining more experience in these kinds of games as they continue to come up. Recently the Detroit Red Wings succeeded in pushing them over the edge as part of a 5-1 blowout that included four Penguins players picking up misconduct penalties.

It all starts with Crosby, the game's best player and reigning Hart Trophy winner. To get to the Penguins, opponents have to get to their captain first.

"Sid's a very competitive guy," Flyers coach Craig Berube said. "He wears his emotions on his sleeve out there. It gets to him at times, for sure."

Giroux figures Crosby gets just as excited to play the Flyers as he does to play the Penguins. Crosby's career numbers against Philadelphia make that abundantly clear.

But each game he'll have to hear plenty of chirping after whistles and from the opposing bench.

"I think it works both sides," Giroux said. "I think they like it too. It's pretty fun to wake up and know you're going to go play the Penguins."

Sidney Crosby shrugs off suggestion he’s having a down year
March 13, 2015 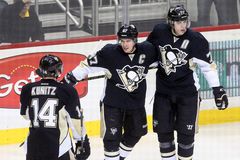 Duhatschek: If Flames make playoffs, Hartley will be coach of the year
March 30, 2015 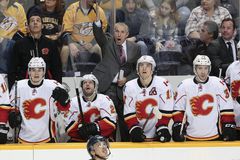